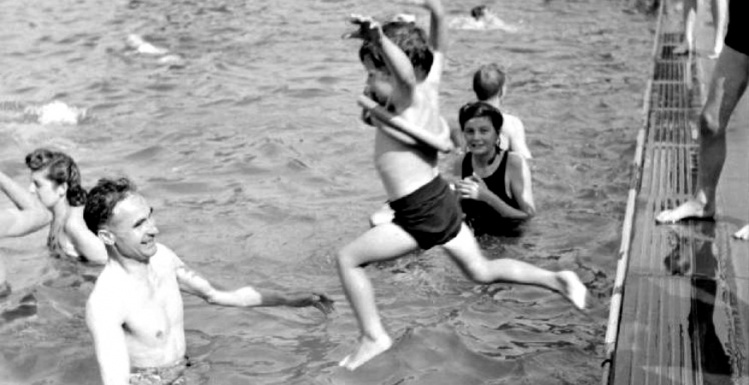 Years ago, when my kids were hardly more than babies, we’d play a game together called “Trust Daddy.” The rules were simple. Climbing to the fourth or fifth step of our foyer staircase, they’d hurl themselves into the air—flying squirrels in PJs—certain they’d land safely in my arms, where I’d smother them in kisses. Adding to the game’s high drama, I’d sometimes place my arms behind my back before they’d jump and dare them even more to fling themselves at me, fearless of the possibility I’d ever fumble in my role as kiddie-catcher and let them meet the hardwood floor beneath us.

It’s a miracle kids survive the bumps and bruises of childhood at all, let alone the threat of injury that accompanies the silly variations on roughhousing invented by their dads. Lately, however, I’ve wondered whether I wasn’t inadvertently teaching my children something important about life, faith, and the divine fatherhood of God just by playing with them in a goofy sort of way—the province of fatherhood, I suppose—when their mom wasn’t watching. What brings this to mind is the recent death of my own father, a retired banker who spent decades dodging the worst effects of diabetes only to succumb in the end to some sneakier aspects of the disease.

Shortly before his death, my dad called my siblings and me and our mom together for what turned out to be a combination board meeting and domestic ritual, during which he calmly laid out a road map for his final journey toward death. The setting was a tiny intensive-care room at the very hospital where he’d been born eighty-five years earlier—where we’d all been born, in fact—a stone’s throw from the church where his funeral would be held just days later. Presiding from his bed as he always had at the head of the family table, my father imparted to us a combination of wisdom and faith as matter-of-factly as possible. He knew from the tumult unfolding in his body that death was just around the corner and wanted his loved ones to embrace that fact without illusion, like the numbers in a bank statement: real, fixed, non-negotiable. Sitting on his lap the whole time was a page from a diocesan newspaper bearing an essay by syndicated author Ron Rolheiser, OMI, titled “Guidelines for the Long Haul,” which my father read aloud like the contents of a solemn epistle. “Be grateful,” he implored us, quoting Rolheiser. Love freely. Live humbly. And “stay within the family,” an injunction not to go it alone in this earthly life but to remain in the fold, the community, the church that knows us by name and upholds our sanctity. “Your mother and I began this family out of love,” he concluded with words of his own. “Now it’s up to you to remain in that love and preserve the bonds that have sustained us.”

His final wishes established, my father spent the last of his days involved in what were essentially two versions of a game of trust—one that placed me and my sibs in the roles of trusting children, confident he was in complete control of the scene and eager to spare us unnecessary pain, and another that cast him as a child again, ready to fling every part of himself toward the outstretched arms of the God he believed awaited him just beyond his final breath. In the end, after all, the experience of a Christian death amounts to an act of trust, which is just another name for faith. We trust, among other things, that these incredibly short and often confusing lives of ours really do have meaning, that even the greatest of our sins pale in comparison with the vastness of God’s love, and that our souls are meant to soar beyond the confines of PJs or hospital gowns or flesh itself. It’s nothing more than a round of “Trust Daddy.” Our Father God invites us to play with him as death approaches, an invitation to leap headlong into the very Mystery that has kept our hearts beating for a lifetime but ultimately calls us beyond the safety of staircases and our fear that graves and gravity really do have the final say on the course of our being.

Michael E. DeSanctis holds dual appointments in the School of Communication and the Arts and the Department of Theology at Gannon University in Erie, Pennsylvania. He is the author of, Building from Belief: Advance, Retreat, and Compromise in the Remaking of Catholic Church Architecture (Liturgical Press).