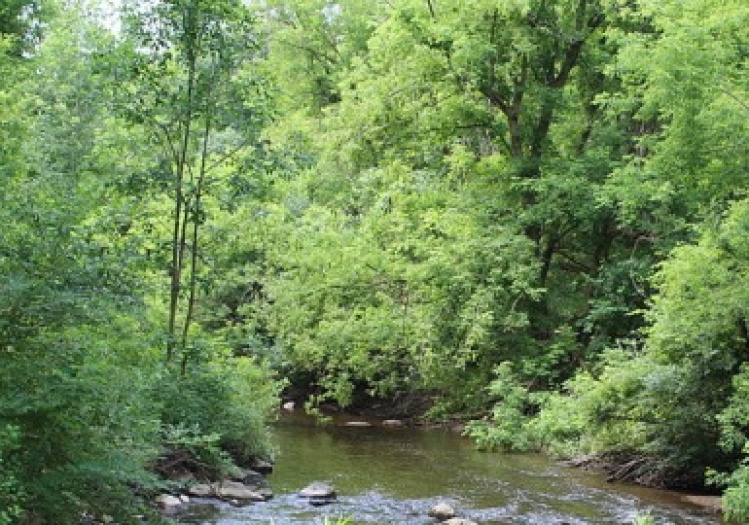 Few things concentrate the mind like the unexpected music of a celestial choir. It certainly brought me up short, midstride on the trail along the South Branch of the Au Sable River, fly rod in hand, listening over the murmur of the water and the sounds of the woods. It was the kind of glorious afternoon that can follow a cloudless, cold October night in northern Michigan, brilliant and clear. No doubt about it. There was the trout stream. These were the woods. And that was a hymn where no hymn should be.

But as soon as I remembered where I was, I knew exactly where that unseen choir stood. The South Branch runs for miles through a section of land given by one George Mason to the people of Michigan on condition that it remain undeveloped, and the Mason Tract is a place of solitude and understated beauty. The only man-made structure along that part of the river is a small chapel, which Mason had built on a high bank above a trouty stretch of water about halfway in. It is a spartan affair of wood and stone, open to the weather, a landmark for anglers and canoeists, and I was maybe seventy-five yards downwind of it, across the stream and on the other side of a thick screen of cedar and pine.

Over nearly forty years I’ve clambered up the bank to the chapel many times, and waded past it countless more, but only on a handful of occasions have I encountered anyone else there, and never anyone using it for its ostensible purpose. Until that afternoon. I listened as the hymn ended. There was a brief silence, broken by a man’s voice saying something I couldn’t make out, then laughter, then more silence, then they began again. A service, or maybe someone had had the inspiration to move practice out of doors on such a day.

I stayed on my side of the water and after another moment continued upstream; the trout were calling, and anyway some things are better not prolonged. Back at the car later with sandwiches and beer, I told my brother and sister about the choir and we laughed at the sheer perfection of it. Another good day on the river.

A Jesuit friend who has heard stories of trips to the Au Sable and other rivers for a long time sometimes observes that trout fishing has a prayerful aspect. It’s an idea that might not seem obvious to anyone familiar with the attitude of an angler who’s just missed a nice fish. What my friend has in mind is nothing pious, certainly nothing allegorical, but rather the discipline of paying attention—not in a formal manner, but deliberately nonetheless. Anyone who’s waded very deep into it knows that simply paying attention is pretty much the entire art of trout fishing, and once you start down that path it is rash to predict where you will come out. For “the world is charged with the grandeur of God,” as my friend’s brother Jesuit Gerard Manley Hopkins wrote. “It will flame out, like shining from shook foil.”

In the couple of years since, the fish I caught on that trip have been forgotten, as have most of the equally good moments between fish. But I do sometimes find myself thinking back on that choir, and then other lines from Hopkins come to mind. He is a poet I like for many reasons, not least because I suspect that anyone who gave thanks in verse “for rose-moles all in stipple upon trout that swim” must also have known and loved a stream somewhere.

As my Jesuit friend might say, what is true and even quite blindingly obvious on a glorious October afternoon below the chapel on the South Branch is true, period, if usually not so plain or so pleasant to recognize. And so I like to remember more of Hopkins’s litany of praise that begins, “Glory be to God for dappled things.” Among them: “Fresh-firecoal chestnut-falls; finches’ wings; / Landscape plotted and pieced—fold, fallow, and plough / And áll trádes, their gear and tackle and trim. / All things counter, original, spare, strange…” It’s good discipline.

What was the hymn I heard that day? “How Great Thou Art.” What else?