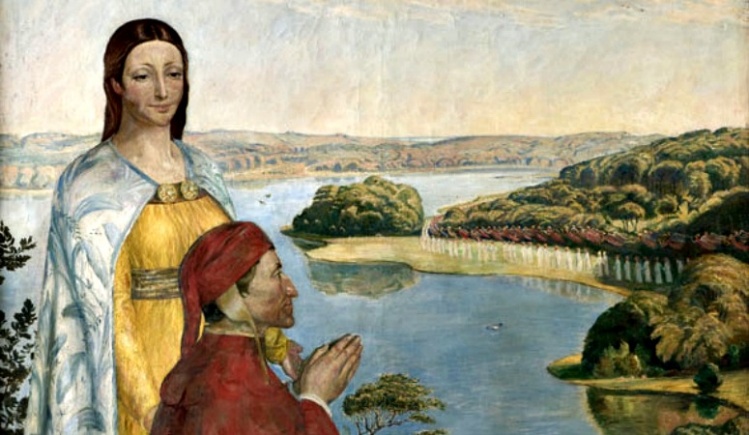 A prince, a philosopher, and a poet walk into a bar...or so I imagine. Specifically, a poet by the name of Dante Alighieri finds himself with a prince from Anjou, Charles Martel, in a church in Florence, where a Dominican monk and philosopher, Remigio dei Girolami, preaches. The church, Santa Maria Novella, had an inn attached to it where distinguished visitors stayed and where, we can assume, a drink could be had and conversation flowed freely. Scholars speculate that all three of these characters may have met there in 1294, and that encounter could have been the inspiration for a scene in Dante’s great poem.

The scene occurs in the Paradiso section of the Divine Comedy, in the third circle of heaven, under the moon of Venus (i.e., human love), with Beatrice as our guide. The scene’s thirty-nine tercets articulate a surprisingly astute concept of civic identity, well worth our attention in today’s fevered political scene. This imagined encounter begins when three “stars” appear to the poet (no one seems to travel alone in heaven). To the star nearest him, the poet calls out: “Who are you?” and Charles Martel is immediately recognized. What a surprise: a politician in celestial beatitude.

Remigio, the philosopher, is not mentioned but it is his thought that reputedly inspires the conversation between poet and prince. What struck my fancy is a line from his work, De Bono Communi (On the Common Good). It is a bold claim boldly stated: “Si non est civis non est homo” (“Where there is no citizen, there is no human”).

As the conversation proceeds, Dante speaks about the discouraging state of affairs in Italy and muses about the rampant evil in politics. No surprise there. The prince, in turn, asks the poet: “Would it be worse for man if he were not a citizen on earth, but left to his own sufficiency?” The poet replies: “Yes…and I do not need to ask the reason.” The shared, self-evident truth for both was that humans are, by nature, political.

Now one person’s self-evident truth is another’s contested claim. Fortunately, the philosopher affords us “reason” to assent to our civic nature and he makes one argument in particular, a sort of via negativa, that might resonate with the turned-off “citizens” of today. He inquires: Where would we be without a city? Not only would we be bereft of a political identity, but soldiers could not soldier, merchants could not sell their merchandise, even families could not have households. His beloved Florence could no longer flourish. Elizabeth Warren, the senator from Massachusetts, argued similarly when she reminded us that the successful entrepreneurs who build factories rely on workers who are publicly educated and roads that are publicly financed and police and fire departments funded by citizens’ taxes. Throughout his work, Remigio, no libertarian, appeals to the traditional Christian notion of the ordo caritatis (the order of love). We are defined by what we love, and love of the common good enhances and completes us in a way the individual, private good is unable to do. Think of the whole Divine Comedy: hell is populated with desolate individuals; purgatory with souls relying on others’ prayers; and heaven with the communion of saints. The Trinity itself is a divine comedy of community.

How do we go wrong? Evil occurs, in Dante’s words, when humans depart from the natural order, making of nature “a poor fist of things.” The immigration debate in the United States is a case in point. Admittedly, the issue is complex but one governing principle might be stated fairly simply: Those who have to live in the shadows are deprived of part of their humanity. Si non est civis, non est homo. A path to citizenship would appropriately honor the principle and restore the ordo caritatis.

A number of years ago my family, out of town visitors, attended church in Washington, D.C. I held our first child in my arms and, when Mass was over, an old woman in front of us turned and greeted us with a warm smile. As she let our son grasp her finger, she asked: “And who is this citizen?” Her accent was European. Not knowing his name or his gender, she had called him, playfully, by a designation few of us would use today: “citizen.” I imagined her as Beatrice.

Francis Kane is professor emeritus at Salisbury University and co-director of its Institute for Public Affairs and Civic Engagement. He is the author of Neither Beasts nor Gods (Southern Methodist University Press).