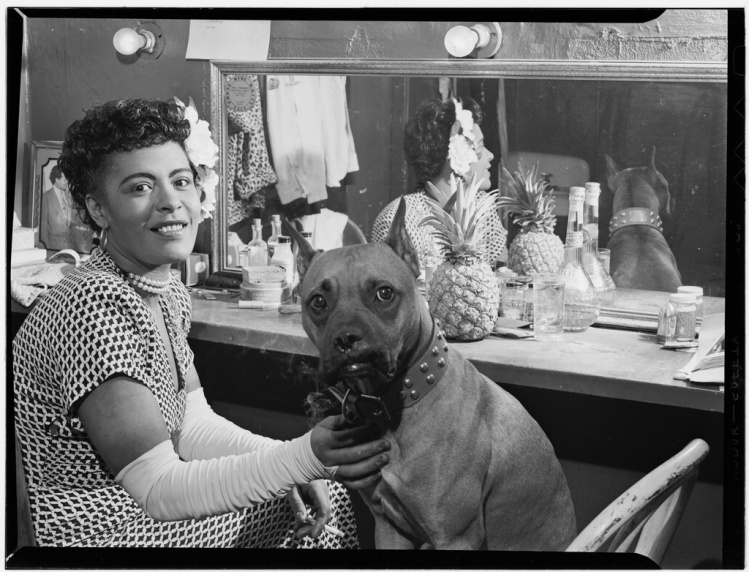 In my senior year of high school, I took out some Billie Holiday CDs from the library and spent drives listening to Lady Day, finding myself in her lovestruck laments. Pulling into a parking lot or my driveway, I’d sit in my car waiting for “I’ll Be Seeing You” or “Good Morning Heartache” to finish playing, tingling with identification.

Tracy Fessenden’s new book, Religion Around Billie Holiday, confirms that I wasn’t alone in my adolescent affiliation with the jazz singer. Holiday’s gentle woundedness has always attracted listeners; her effortless register leaps, parlando pitterpatter, and carefully employed vibrato are all couched in a sort of smiling-through-tears. The slippery, ironic crooning of “My Man”: Two or three girls has he, that he likes as well as me, but I love him.... All my life is just despair, but I don’t care. The sinister, enunciated consonants of “Strange Fruit”: Pastoral scene of the gallant South, the bulging eyes and twisted mouth. It’s all of a piece with Holiday’s tragic biography. Born in 1915 as Eleanora Fagan, Holiday grew up poor in Baltimore, singing in brothels. Through a career that included twelve albums, classic covers of standards like “Summertime,” and chart-toppers (“God Bless the Child” alone sold over a million copies), she battled a heroin addiction, had her cabaret card revoked, endured a string of abusive relationships, and died at forty-four. In the 1947 film New Orleans, Holiday performed as a singing maid; Louis Armstrong got to play himself. Her slapdash 1956 autobiography Lady Sings the Blues, cowritten by William Dufty and the basis for the 1972 Diana Ross film, plays up her “singular, difficult life”: taking a mustard bath to induce an abortion, being forced to sleep with a corpse as a Catholic-school punishment. Out of the darkness streams light: her prodigiously beautiful voice, untutored, unprecedented, unearned, God’s gift.

So the story goes. But Fessenden, a professor of historical, philosophical, and religious studies at Arizona State University, wants to complicate the now-familiar narrative, and she does so by means of that punishing Catholic reform school. Holiday was sent to the House of the Good Shepherd for Colored Girls twice as a young girl: the first time for truancy, the second time after someone attempted to rape her. The school was penitential, demanding the confessing and re-confessing of sexual escapades and other sins. But there was also an emphasis on choral singing, with constant vocal exercise through the chants of the Liber Usualis and teaching from a book called The Priest’s Voice. This education, Fessenden asserts, belies the claim that Holiday’s voice was entirely natural; she also worked for it.

On her deathbed in a Harlem hospital, Holiday said to her co-author Dufty, “I’ve always been a religious bitch.” Fessenden takes this quip and runs with it, teasing out every Catholic fact of the singer’s biography before and after her time at Good Shepherd. She interprets Holiday’s public persona in church language: “alternating performances of white-gowned, beatific rectitude and reform-school brio” plus a “bad-girl cred and an apprenticeship in radiance.” Holiday had a love for St. Thérèse of Lisieux and an attachment to the rosary; she went to a priest for counsel; she was confirmed. In her music, she confessed and self-punished, clinging to, as Fessenden puts it, “a paradox of late medieval women’s piety, the notion that divine mercy might be found in plumbing every possibility of the flesh.” She dreamed of opening a Dorothy Day–esque farm for the down-and-out. (She loved to cook fried chicken for fellow musicians, give them whiskey and a place to sleep.)

It’s refreshing to read a nonfiction text so freewheeling, and to encounter a scholar who so delights in making observations for the sheer wit of them.
sharetweet

But whether Holiday actually knew anything about Day remains an open question. Indeed, Fessenden admits, her actual relationship to Catholicism was “casual and attenuated, lived in ways that prompted neither avowal nor rebellion.” That deathbed quote culminated with a dig at her estranged husband, Louis McKay: “...but if that dirty motherfucker believes in God, I’m thinking it over.”

This scattered list of connected suppositions is characteristic of Fessenden’s approach. Although a significant portion of the brief book (only 196 pages without footnotes) is consumed with Holiday’s Catholicism, it is not primarily “about” that. Indeed, it is not a traditional academic text with one clear, driving argument about religion and jazz, or religion and art, or even religion and Billie Holiday.

Rather, the thesis, slipped into Religion Around’s introduction, is simply descriptive: “The world Billie Holiday moved in was thick with religion of various stripes and degrees of remove from the pews, and...this religion mattered for her life and her sound and what she and others made of them.” There was religion “around,” and, Fessenden posits, it must have influenced Holiday somehow. There were the black spirituals that birthed the blues, the Gregorian chants of Catholicism, the Jewish songwriting on Tin Pan Alley, the Sunday gospel anthems in Harlem, all swirling together in clubs and synagogues and recording studios and churches. Fessenden captures this atmosphere by making associations, details layered on details in an almost stream-of-consciousness fashion.

One string of associations goes like this: black religion was marketed to the masses as primitive Christianity; white promoter John Hammond put on a Carnegie Hall concert about the origins of jazz; he also set up Billie’s first recording deal; Billie was sometimes asked to put on black paint before performances to darken her skin; Hammond dropped Billie ostensibly because of her drug use, but rumor has it she wouldn’t sing the blues in the “authentic” way he wanted.

Then, a riff on the relationship between jazz and the black church: jazz moved north from the Protestant South and drew on the call-and-response of its sermons; but Billie wasn’t from the Protestant South; but, Catholicism was alive in New Orleans, home of Louis Armstrong; Louis and Billie were in a movie together; also, by the way, churchgoing counties had higher incidences of lynching, and poets “around” Billie, like Langston Hughes and Countee Cullen, were riffing on the Black Christ.

Lynching brings us to “Strange Fruit,” written by the Jewish composer Abel Meeropol four days after Kristallnacht; Holiday did some victory work during World War II, angry for the black men that feverishly wrote her from the swamps; oh yes, and on his deathbed, Louis Armstrong credited a Jewish adopted family with his success, an account at odds with his official biography.

In the churn of the book, Fessenden’s opinions occasionally bubble to the surface. “So much of American music comes of Jews channeling blackness,” she writes. Promoters and producers sought to “fit African American historical experience to an all-American template of social and spiritual deliverance”; and “Billie Holiday was both an accessory and an obstacle to that project.” But in the midst of all this association, Billie Holiday herself gets left behind for pages at a time, one singer in a vast world of trumpeters and promoters, sinners and believers.

It’s refreshing to read a nonfiction text so freewheeling, and to encounter a scholar who so delights in making observations for the sheer wit of them. Fessenden is interested in Holiday’s contemporaries and the coincidences of her career, and these aren’t artificially forced into an argument.

Such a style also has its drawbacks. Fessenden’s extremely elliptical structure makes it hard to get a handle on places and dates. I left the book without a clear, biographical sense of what Holiday was doing when. Singing scenes are lacking. The book often veers into tangents: filmmaking in Cuba, the politics of ghostwriting, Ma Rainey, scummy romance novels about creepy convents. Minor characters are mentioned and then appear pages later without identifying information. There isn’t a complete discography.

Most noticeably, Fessenden frequently remakes points or resets scenes. At times, it seems she’s working within jazz’s modus operandi of reiteration and variation—or perhaps just according to a template that Penn State’s publishing house imposed on her. (The book is part of the university’s Religion Around series.) But some of the repetitions feel more accidental than intentional. And some of Fessenden’s  speculations seem like compensation for a shortage of hard facts, as if she was finally unable to situate this woman—scorned and successful, wounded and triumphant, Catholic and not—in the fluid relations of music and faith.