Labor, Management and the Public 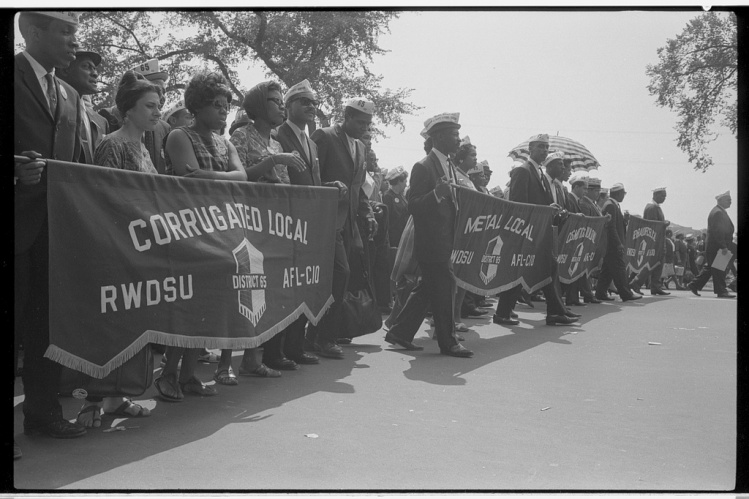 The Traditional Labor Day statement from the Social Action Department of the National Catholic Welfare Conference contains timely proposals on collective bargaining and the public interests. The full text follows:

Labor Day in 1960 finds both labor and management on the defensive and collective bargaining on probation before the bar of public opinion. The reason for this is not far to seek. Rightly or wrongly, public opinion--in the brutally frank words of one competent observer--"is sick and tired of what it considers selfish, irresponsible stupidity on both sides..." and, "no longer willing to say 'boys will be boys'...is calling for the police."

In our judgment this is putting the case against labor and management much too strongly. The fact remains, however, that, with or without sufficient reason, a growing number of Americans are losing confidence in the ability of union leaders and management representatives to make collective bargaining serve the public interest and, worse than that, are losing faith in the very institution of collective bargaining itself.

This is a rather alarming turn of events. It means, among other things, that, given another round of crippling strikes or lockouts, labor and management might be saddled with some form of compulsory arbitration as a substitute for free collective bargaining. The fact that they escaped this dismal fate in 1960 is no guarantee that their luck will hold out indefinitely. On the contrary, the next time that public opinion "calls for the police," it may not be politically feasible or expedient for the police (meaning, in this context, the Congress of the United States and the several state legislatures) to look the other way.

The situation, however, is not by any means completely hopeleses. Labor and management still have it within their power not only to avoid compulsory arbitration but also, from the more positive point of view, to restore public confidence in the basic soundness of free collective bargaining and voluntary labor-management cooperation.

This presupposes, of course, that both labor and management, fully realizing what they are up against, are prepared to meet the public opinion at least halfway. It also presupposes that the American people and their elected representatives will have the maturity and the good judgment to make haste very slowly in the field of labor-management legislation. To substitute compulsory arbitration for collective bargaining would be disastrous. Similarly, to "cut the unions down to size" or to limit collective bargaining to the plant or company level, as some Americans have petitioned the Congress to do, would be a serious mistake and would undoubtedly create more problems than it would solve.

In arguing against compulsory arbitration and the other restrictive proposals mentioned above, we do not mean to imply that unregulated collective bargaining is necessarily an adequate method of handling labor-management relations under any and all circumstances. On the contrary, there may well be need for additional legislation to safeguard the public interest in emergency situations endangering the security of the nation or adversely affecting the health and safety of its citizens.

We are convinced, however, that no such legislation should be enacted until the National Labor-Management Conference which recently came into being at the invitation of the President of the United States has had an opportunity to formulate its own recommendations. The convening of this National Labor-Management Conference in the Spring of 1960 was a significant step in the right direction, and, while it did not get off to a very auspicious start and has yet to show any measurable results, it deserves the encouragement and support of the American people and should be given ample time to demonstrate its usefulness. For our own part, we sincerely hope that it will be eminently successful and that it will eventually lead to the establishment of continuing labor-management conferences or councils in all of the major industries in the United States.

The purpose of these proposed industry conferences or councils would be three-fold: (1) to develop greater understanding and a better spirit of cooperation between labor and management; (2) to make the parties more acutely conscious of their mutual obligation to serve the public interest; (3) to enable them to fulfill this obligation more effectively than they are now able to do. The public has a vital interest in the wage and price decisions of labor and management. Unfortunately, however, even those labor leaders and management representatives who recognize this fact--and their number, in our opinion, is greater than the public realizes--are not in a position to do very much about it at the present time.

The reason for this--as more and more economists are currently pointing out--is that collective bargaining, almost of its very nature, impels both parties to look more or less exclusively to their own narrow advantage and to operate, so to speak, at cross purposes with one another. Moreover, collective bargaining is rather limited in scope and is generally confined to controversial matters which all too often tend to divide rather than unite labor and management.

This is not to say that collective bargaining should be discarded. Not at all. Free collective bargaining between unions and employers is not only desirable but necessary. We need more of it rather than less. That, of course, is why the Church insists so emphatically on the right of labor to organize and on the obligation of employers and government to respect and facilitate the exercise of this right.

Nevertheless, collective bargaining is not enough. While it is an important step in the right direction, it should be supplemented, wherever possible, with new forms of labor-management cooperation fitted to the particular needs of individual companies and industries and designed to safeguard and promote the common good. For example, there could be regular labor-management meetings on the plant level, distinct from discussion of grievances under negotiated contracts. Such meetings could anticipate problems and develop patterns of cooperation, without interfering with agreements reached under normal collective bargaining.

There is a genuine need also for a series of industrywide conferences or councils along the lines indicated above---joint labor-management agencies in which the two parties can systematically relate their wage-price decisions to the public interest and, instead of working at cross purposes with one another, can effectively promote the general economic welfare. Moreover, it is to be hoped that in due time these industry-wide groupings will be federated into a permanent national labor-management conference or council within which the ethical guide lines of a sound national wage-price policy can be periodically reviewed.

"It is easy to be skeptical," as one distinguished economist has recently pointed out, "that such an understanding could be brought about in a society which properly treasures .the diffusion of authority in its economy as in its politics. On the other ,hand, it is now widely appreciated that the beggar-thy-neighbor tactics built into the inflationary process ultimately benefit neither capital nor labor and damage the common interest. Under such circumstances, it should not be beyond the wit of a nation which has made federalism an art to harmonize the higher interests of the community with the continued vitality of its private economic institutions."

It should not be beyond the wit of a nation which has made federalism an art to harmonize the higher interests of the community with the continued vitality of its private economic institutions.
sharetweet

In recent months there have been several developments which encourage us to share the optimism reflected in this statement. One of these developments has already been mentioned--the convening of a preliminary National Labor-Management Conference under Presidential auspices. Equally noteworthy was the establishment during the past year, in a number of basic steel companies, of joint labor-management public committees empowered to recommend, for the consideration of the parties, a plan for the equitable sharing of the companies' economic progress. And, last but not least, it is gratifying to note that a growing number of high level conferences are currently being held under private auspices on ways and means of improving collective bargaining and developing a greater spirit of public responsibility on the part of labor and management.

All of these developments represent genuine progress. They should not be expected to solve all of our problems in the field of labor-management relations. They will, however, bring up for serious discussion by the two parties many of the right questions--and this will be all to the good.

In conclusion, it remains for us to extend to labor and management on this annual holiday--a holiday which properly belongs to both of them as co-equal partners in the American economy--our congratulations on what they have accomplished in the past and our cordial best wishes for the future success of their efforts to promote the general economic welfare. It is our earnest and prayerful hope--in the words of Pope John XXIII that there "may...reign in social life true charity...mutual respect, the will to collaborate, a familiar and fraternal climate according to the enlightened suggestions contained in the letter of Saint Paul to the Colossians read in today's Mass of Saint Joseph, patron of the workingman:

'Whatever you do in word or in work, do all in the name of the Lord Jesus, giving thanks to God the Father through Him .... Whatever you do, work at it from the heart as for the Lord and not for men, knowing that from the Lord you will receive the inheritance as your reward. Serve the Lord Christ'" (Col. 3:17, 23-24).