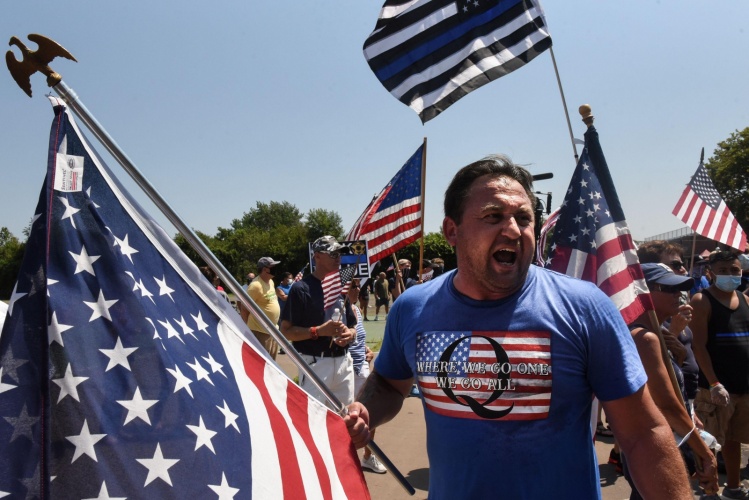 A person wearing a T-shirt supportive of QAnon participates in a “Back the Blue” rally in Brooklyn, August 9, 2020 (Reuters/Stephanie Keith/Alamy).

Even as Donald Trump’s administration sinks into history, the country is still smarting from January’s seditious violence waged in his name. Some of our most duplicitous politicians have tried to pin the Capitol riots on anti-Trump activists, but smoky photographs of QAnon flags and, increasingly, detailed indictments give a clear picture of the rebels’ far-right allegiances. Among those treasonous banners, one can’t help but notice crosses and a hint of idolatry: “Jesus 2020,” “Trump is My Savior.” It’s not surprising, then, that commentators have begun to see QAnon conspiracism as a religious movement. In the New Yorker, Michael Luo catalogs Evangelical iconography at the insurrection and documents “the American church’s role in bringing the country to this dangerous moment.” In a cover story for the Atlantic last summer, Adrienne LaFrance calls QAnon a “mass rejection of reason, objectivity, and other Enlightenment values,” ultimately “not just a conspiracy theory but…a new religion.”

This isn’t the first time American critics have viewed conspiratorial thinking as a kind of irrational religiosity. Undergirding more recent works like Susan Jacoby’s 2008 The Age of American Unreason is Columbia historian Richard Hofstadter’s landmark book The Paranoid Style in American Politics. Hofstadter details a Manichaean mode of thinking, principally on the far right, whose followers do “not see social conflict as something to be mediated and compromised [because] what is at stake is always a conflict between absolute good and absolute evil.” This “apocalypticism” takes up “similar themes in Christianity” by seeing mundane politics as a literal crusade against unpatriotic infidels.

Looking at those crosses on January 6, we might follow Hofstadter and his intellectual descendants by coupling American fundamentalist fervor with our newest fringe politics. But we run a risk by broadly framing QAnon as a form of faith: we imply that its adherents might be redeemed by turning to an ardent secularism that follows the facts, crunches the data, and ditches the mythologies. But dispassionate logic, by itself, can’t salvage our democratic culture, chiefly because not one of us actually embodies “reason, objectivity, and other Enlightenment values” as much as we would like. As American writers from a century ago observed, the ever-growing complexity of the modern world has turned cool rationality into the tallest of tall orders. Especially in our era of virus variants and alchemic cryptocurrencies, QAnon’s cardinal transgression is not faith exactly. Instead, QAnon embodies our era’s worst kind of pride—the arrogance of presuming to have figured it all out.

Lippmann’s manufactured stereotypes...show us how we come to occupy worlds that are different from, and even irreconcilable with, those of our fellow citizens.
sharetweet

Decades before Hofstadter’s landmark study of unhinged political paranoia, the journalist Walter Lippmann considered the inability of all sorts of Americans, not just conspiratorial fanatics, to cope with a modern world that is “altogether too big, too complex, and too fleeting for direct acquaintance.” Lippmann’s argument isn’t just some snobbish attack on the uneducated. In Public Opinion, he laments the “intolerable and unworkable fiction that each of us must acquire a competent opinion about all public affairs,” matters that are increasingly beyond our grasp. Instead, we all see the world through “stereotypes,” Lippmann’s own durable terminology. These simplifications and presuppositions render the world intelligible to those of us with imperfect knowledge—to everyone, that is. Ultimately Lippmann rejects the “accepted ideal of the sovereign and omnicompetent citizen” on the grounds that he does not and cannot exist.

Anticipating today’s echo chambers and filter bubbles, Lippmann’s manufactured stereotypes—those we all make based on half-truths and anecdotal experience—show us how we come to occupy worlds that are different from, and even irreconcilable with, those of our fellow citizens. A person who grew up in the American South will have views on the history of race relations different from those held by suburbanites in New Hampshire. Our parents’ generation has views of personal debt incompatible with the experiences of Millennials, and vice versa. These differences usually stem not from malice but from our ignorance or partiality, and when we forget about our own psychological provincialism, we regard each other “as unreasonable or perverse, when the real difference between [us] is a difference of perception.”

Revisiting Lippmann now can clarify how we arrived at Pizzagate and #StopTheSteal. If each of us only partly understands technical knowledge like the logistics of federal elections or mRNA vaccines, it’s not surprising that Americans end up seeing each other as unreasonable and even malicious. For example, only the most rarefied legal experts actually grasp our states’ varied voting protocols, so it’s easier for the rest of us to perceive surprising and unwelcome electoral outcomes through stereotypes about partisan corruption or foreign hackers. It’s worth repeating how Lippmann sees stereotypes as a universal feature of modern psychology: When deciding whether to get vaccinated or which presidential candidate to vote for, few of us study white papers and data tables—because who has the time? By expanding irrational thinking beyond cultish superstition, Lippmann’s stereotypes show how no one operates with all-knowing objectivity: not you, not me. “From the totem pole to the national flag, from the wooden idol to God the Invisible King, from the magic word to some diluted version of Adam Smith,” we all navigate the world only after consulting our slogans. Hardly the exclusive domain of QAnon zealots, then, mere belief plagues us all.

Lippmann’s bluntly realistic view of the stereotypes we use to make sense of this bustling mess of reality culminates in an invitation for self-doubt: “It is only when we are in the habit of recognizing our opinions as a partial experience seen through our stereotypes that we become truly tolerant.” Here Lippmann anticipates some conclusions in Hofstadter’s writings, too, especially when the latter praises “political intelligence” for being “essentially relativist and skeptical, but at the same time circumspect and humane.” By contrast, the “fundamentalist mind” confidently embraces absolutism, for it “can tolerate no ambiguities.” For both Lippmann and Hofstadter, it would seem, the worst problems arise when we abandon tolerance, not when we abandon some unachievable standard of objectivity.

But how much tolerance should we aim for? Some views are simply beyond the pale. Even if I’m no expert on epidemiology, surely I can be confident that the United Nations isn’t covertly orchestrating a global depopulation scheme with Bill Gates. Nor should I be open to the absurd belief that a cabal of pedosatanists rigs our elections simply because I, too, don’t exactly understand how mail-in ballots are handled. These problems of tolerating the intolerable have dogged philosophers and political thinkers from antiquity to our own time, and especially in our diverse and polarized country, the problems may be unsolvable.

Still, viewed against the backdrop of Lippmann’s stereotypes, a central failing of QAnon isn’t that it forsakes assiduous, exhaustive scrutiny—that’s a failing that, at least to some degree, we all share. A more unforgivable fault is its pretension of omniscience. In her essay on the religious elements of QAnon, LaFrance asks, “Does it matter that basic aspects of Q’s teachings cannot be confirmed? The basic tenets of Christianity cannot be confirmed.” If 2020 has taught me anything, it’s that I can confirm very little in my own life—whether I need to wipe down groceries with soap or whether my students are listening during Zoom seminars, to say nothing of the paradoxes of evil and suffering. But not so for QAnon. As one follower tells LaFrance, “It’s not a theory. It’s the foretelling of things to come.” Q has solved every mystery, from the mundane to the profound. They know the origins of SARS-CoV-2, and—the Gospel of Matthew notwithstanding—they knew the day and the hour of the apocalypse: January 6, midday. Some view QAnon as a sect of believers with scriptures and sacraments, but we might more accurately see its adherents as self-deluded know-it-alls.

Even if each of us stands little chance of grasping our complex world without late nights spent in a research library, not all hope is lost. Crucially, there’s a difference between individual ignorance and collective ignorance, and the fact that I haven’t studied mRNA technology doesn’t push me into vaccine trutherism. Specialists can do my virology homework for me, and I can humbly trust their advice. (In turn, I would happily revise their Cicero translations.) Following this strategy for coping with modernity, Lippmann prescribes a kind of bureaucratic “intelligence work” done by academic experts who have the time and talent to master specialized knowledge.

To champions of democracy like John Dewey, Lippmann’s proposal is an unacceptable call for an aristocracy with a briefcase. We shouldn’t dismiss Dewey’s criticism out of hand: as the pandemic has made clear, our aristocrats of knowledge—scholars, journalists, politicians—can make fatal blunders. Early recommendations against wearing masks are the most glaring example: top authorities, including even Surgeon General Jerome Adams, confidently dismissed mask-wearing as ineffective, undoubtedly costing American lives. The press should take 2020 as grim inspiration to interrogate “intelligence work” ruthlessly, especially on novel matters like a fast-moving pandemic, and the rest of us should heed scientific expertise while remembering that science is always provisional. Most importantly, we must learn to live with uncertainty.

It is precisely an intolerance for uncertainty that draws many people to conspiracy theories; all their suspicions are confirmed, all their questions answered, with one comprehensive story. Accordingly, the Capitol insurrectionists acted with blind certainty and heedless presumption. In a video that shows some of them breaking into the Senate chamber and rifling through Sen. Ted Cruz’s papers, one says, “Cruz would want us to do this.” “Yeah, absolutely,” another answers. A young man flips through a binder: “There’s gotta be something in here we can fucking use against these scumbags.”

But these clips of the Capitol riots underscore the perils of confident prediction. After the so-called QAnon Shaman scribbled “It’s only a matter of time, justice is coming!” on a Senate desk, he led his fellow insurrectionists in triumphant prayer, their hands aloft: “Thank you, divine, omniscient, omnipotent, and omnipresent creator God, for blessing each and every one of us.” They assumed that Providence had led them there and would grant them “the divine and omnipresent white light of love and protection.” But the Storm passed, Trump surrendered. QAnon’s prideful omniscience collapsed at the moment of Joe Biden’s pious request—“So help me God”—and prophecy turned out to be fantasy. Our present is the one End of Days they had never predicted, every arrest a rapture, every mugshot a revelation.