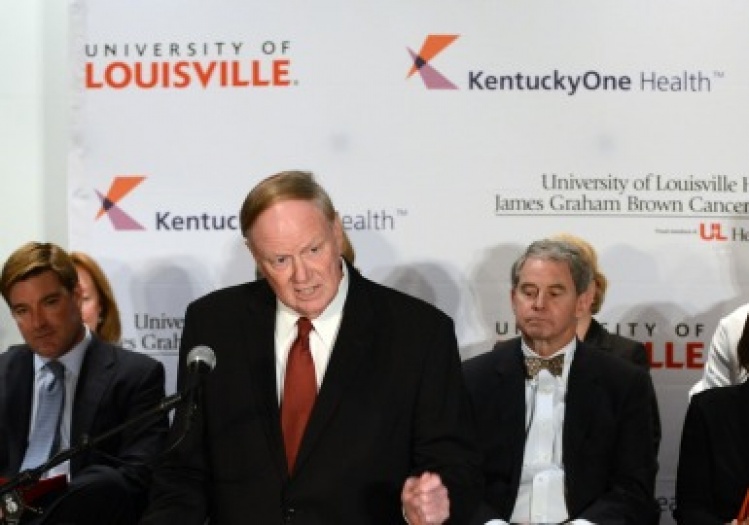 Last year in Commonweal I wrote about the failed merger between the University of Louisville Medical Center (UMC) and a consortium of Catholic and Jewish hospitals soon to be owned and managed by Catholic Health Initiatives, and how this would negatively impact the indigent and uninsured in Kentucky, one of the least healthy states in the nation. But since then, a joint operating agreement has been worked out among the parties; though not officially a merger, it nonetheless delivers on many of the terms and conditions laid out in the original merger plan—with the uninsured and underserved in rural areas the primary beneficiaries. How did this reversal come about? And what lessons might it offer for communities seeking mergers or cooperative agreements between public or secular hospitals and Catholic ones?

First, some background on the original merger plan. An agreement that had been hammered out over the course of more than a year finally won approval from all relevant parties, and after public vetting initially received widespread support. The Catholic hospitals would have controlled a majority of the seats on the combined board, and the designated management company, Catholic Health Initiatives, was committed to following the mandate of the Ethical and Religious Directives (ERDs) of the United States Conference of Catholic Bishops. But opposition from women’s groups, a number of political figures, and The Louisville Courier-Journal (the largest daily newspaper in the state)—all worried about the implications of a Catholic consortium in effect taking ownership of and managing a secular, publicly owned hospital system—effectively derailed it. The coup de grace came when then newly re-elected Democratic Governor Steve Beshear unexpectedly failed to approve the merger by the end of a 2011 deadline. He continued his public opposition to the plan through most of 2012.

Then things began to change. In early 2012, shortly after it became apparent that there would be no immediate reversal of the governor’s decision to reject the original merger agreement, and facing increased financial pressure and cuts to patient services, the University of Louisville issued an RFP seeking potential merger or cooperative partners. Only two proposals were received: one from a secular healthcare organization in Florida, and the other from the newly formed KentuckyOne Health, which was created by a full merger of a number of Catholic hospitals and the Jewish hospital system and which was now owned and managed by Catholic Health Initiatives. The latter was judged by far the most beneficial to EMC and the state, and on November 14, 2012, a joint operating agreement between UMC and KentuckyOne was announced. It received the approval of the state attorney general and Governor Beshear and was implemented on March 1, 2013.

So what happened in the interim? The public and some political opposition to the original merger centered on how adherence to the ERDs might affect the services, especially women’s reproductive health, delivered by UMC. Analysis of such services revealed that only two areas would be affected: tubal ligations, and dispensing of contraceptives at the UMC in-house pharmacy. Nevertheless, Governor Beshear cited these in denying the merger, but he seemed to put more emphasis on the relatively narrow grounds of turning over a “state-owned facility” to a private organization, and the supposed financial risk of undoing the merger in future years if needed. State ownership of UMC was a disputed point; not in dispute was that the state owns the ground on which UMC is built and leases the land to the hospital.

The joint operating agreement addressed these objections. In effect, KentuckyOne will “manage the operations” of UMC, not own it; no property will be transferred. Furthermore, a management agreement is much easier to undo than a merger. That Catholic Health Initiatives will also infuse $534.5 million of investment into UMC over the first five years of the agreement—and as much as $1.4 billion over the full twenty-year term, more than proposed in the original merger plan—might also have helped change Beshear’s opinion.

As for tubal ligations and dispensing of contraceptives, both of which are contrary to the ERDs: These will be handled by the University’s Center for Women and Infants, a facility to be managed directly by UMC, not by KentuckyOne. The Kentucky bishops apparently have not voiced objections to this arrangement.

Some key opponents of the original merger plan are also not satisfied with the cooperative agreement: Honi Marlene Goldman, a local businesswoman who’d led a grassroots movement opposing the original merger, has called it a “camel under the tent” situation, with the Catholic church now in a position to influence the delivery of health services in Kentucky. Opponents also anticipate circumstances in which the joint operating agreement could easily become a full merger in the not-too-distant future. The Courier-Journal has expressed reservations about the agreement as well.

Insiders are divided on the political calculus of Governor Beshear, who some say might be contemplating a Senate run. However, there is no doubt that the new arrangement will be an economic boon to the state. The governor’s decision to approve the cooperative agreement will help shore up the finances of UMC, ease the burden on the state’s coffers, extend health services and benefits across the state, and, most important, help ensure higher quality healthcare to the indigent and uninsured for many years to come. Beshear should be applauded for backing the joint operating agreement between UMC and KentuckyOne.

And there are some lessons to take away. First, cooperative agreements are easier for the political establishment to consent to than outright mergers. Second, it may be possible to build a sort of “Chinese wall” into such agreements, separating objectionable procedures like those identified in the ERDs from other healthcare services. Third, any agreement should clearly provide more benefit to the public, both financially and in terms of healthcare, than competing proposals—especially benefits for the indigent and under- or uninsured.

Perhaps the joint operating agreement between UMC and KentuckyOne, a Catholic healthcare organization, will provide a template for similar arrangements in other states, when full mergers are not feasible.