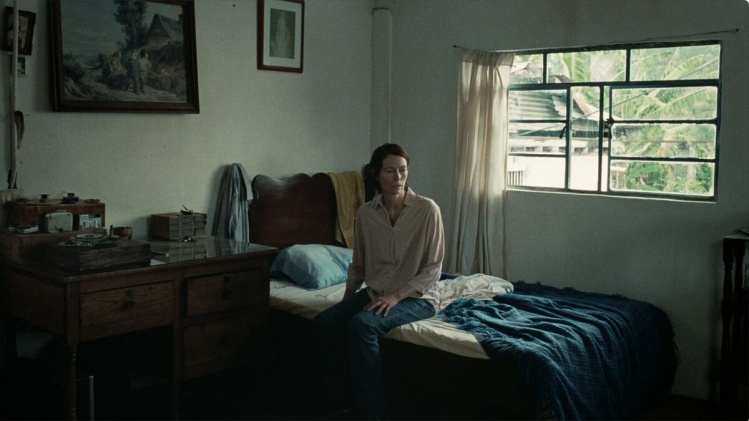 We see a pile of cloth in a barely lit room. We look, and we look some more, and might make out an ever-so-slight movement under the cloth, as if the object were breathing. Then wham: a walloping sound bursts the silence, the covers fall back, and Tilda Swinton rises into frame.

I have seen Memoria four times now, but every time I see it again I forget this basic order of events. Such is the beguiling magic of filmmaker Apichatpong Weerasethakul’s new film: I find myself so absorbed by the nearly dark frame, illuminated by the little streetlight showing through the curtains, that the noise hits me like a blow every time, and I shake in my seat, momentarily as disoriented as our protagonist. That feeling will persist for the rest of the film.

Swinton plays a recently widowed woman named Jessica who comes to Bogotá from Medellín after her sister falls sick with an unnamed and possibly unknown illness. This trip is disrupted by that mysterious noise. If it comes from the world around her, she can’t find the source. If it originates in her head, why has it started now?

There’s a mystery here, but Jessica seems willing to put it out of her mind, and for a time the film follows her lead. Not much “happens” in Memoria. For over an hour, Jessica makes her way about the city, visiting with her sister, shopping for her nursery, exploring the university grounds, and striking up a friendship with an anthropologist. She listens to a group of student musicians, researches a blight attacking her flowers, walks into an art gallery, and looks after her nephew.

But the noise interrupts these long, slow stretches more and more often, until Jessica grows sleepless and haggard. She wants proof that she is hearing something real. In a lengthy sequence, she attempts to recreate it with the help of an audio engineer named Hernán, going back and forth over the tiniest sonic details until the sound from the speakers resembles the one in her head. Her goal is to communicate the noise, not to find a cure for it. When Hernán finally gets the noise right, Jessica collapses into her chair, overcome with relief.

Weerasethakul’s camera transforms the familiar world into another realm, one in which flesh and spirit overlap.
sharetweet

For many directors, this would hardly be enough material for a short film; but for Weerasethakul, it’s all par for the course. Since 2000, the Palme d’Or–winning Thai director has directed eight features and a number of short films and installation pieces. He is an exponent of the virtues of “slow cinema,” and his films are largely told in highly composed, deliberately paced long takes. Observation supersedes narrative. We are asked to examine every detail within a frame, and to note slow, almost imperceptible changes. “What matter[s],” writes Hilton Als in a New Yorker essay on the director’s work, is “the image that Weerasethakul and his cinematographer [create] on the screen.” Weerasethakul’s camera transforms the familiar world into another realm, one in which flesh and spirit overlap. This overlapping is unobtrusive: past lives, karmic illnesses, mediums, ghosts, goddesses in human form and modern dress—all simply appear in his world, without pomp or pretense. In one of his most famous scenes (from 2010’s Uncle Boonmee Who Can Recall His Past Lives), the wife and son of a dying man appear in the guise of a spirit and a monkey ghost, not to haunt our subject, but simply to share a meal with him. The image is straightforward, matter-of-fact. In Weerasethakul’s films, the spiritual is as normal as any other dimension of human experience.

Memoria is the first feature Weerasethakul has made outside of his native Thailand. Swinton’s Jessica serves as a kind of stand-in for the director, wandering through this foreign landscape with a mixture of curiosity and confusion. She goes from the hospital to the library to an archeological site beneath a tunnel dig, and the camera goes with her, lingering equally over ancient bones, construction equipment, and dancers in a plaza. Her performance is reserved, as if retracting ever so slightly from the world around her. I’m not sure I’ve seen an actor do so much with only her shoulders and the gap between her lips.

Where Weerasethakul’s other characters tend to accept the arrival of the unreal in their lives, Jessica experiences the noise as deeply destabilizing. It breaks violently into the movie, shaking and resettling the contents of Jessica’s world. She begins to notice events that others don’t, confuses the living with the dead, sees patterns in car alarms and flickering lights. A lesser film might deal with these events by turning to the bunk-Freudianism of the psychological thriller, leaving us with yet another story of a woman losing her grip on reality. And in fact Jessica does say at one point that she thinks she’s going crazy.

But her world is not collapsing; it is expanding. The mysterious noise has awoken her to a deeper reality. Weerasethakul’s protagonists are typically so familiar with the spiritual realm that they are only mildly put off by its intrusions. Their world is already expansive enough to accommodate it comfortably. But in Memoria, Jessica must slowly find her way into this other dimension. The film stacks mystery on mystery—illnesses, disappearances, curses, spells, stray dogs, synchronized car alarms—without explanation or resolution. They simply appear; and when they do, Jessica notices them.

Memoria’s cinematography highlights the peculiar way that light falls on a building, or the way that a rainstorm can suddenly turn day into night. The film’s sound design is fittingly enveloping, from the hum of student voices in a courtyard to the mountain clamor of insects and birds. Every sound, no matter how small, is filled in. (Memoria must have some of the loudest chairs in cinema history.) And the Noise itself is suitably physical; Jessica describes it to Hernán as “like a big ball of concrete that falls into a metal well and is surrounded by seawater,” a sentence whose weird synesthesia seems exactly right.

To describe Memoria as the story of one person waking up to a deeper level of reality wouldn’t do it justice; its aims are far more expansive. Arriving in Pijao, Jessica encounters another, older Hernán, one who has never left his hometown. This Hernán remembers everything that has ever happened to him, and even some things that happened before his birth. “Experiences,” he explains, “are harmful,” especially when relived as memories, and so he has chosen a way of life that minimizes new experiences.

In a bravura final sequence, Jessica “reads” Hernán’s memories back into the very distant past. Like a medium, she is somehow able to channel his past lives. The memories are his, and yet she experiences them as if they were her own. The boundary between their minds comes down, and the world pours in.

She emerges from this experience shattered but relieved. For Weerasethakul, this is the fundamental artistic dilemma: being open to the world means that we notice both the joy of beauty and the pain of ugliness. In their slow, patient frames, his films show us plenty of both. Look, he says, keep looking. It’s all there.