What Can Be Done?
By Paul Moses
U.S. Catholicism
Domestic Affairs
Bishops 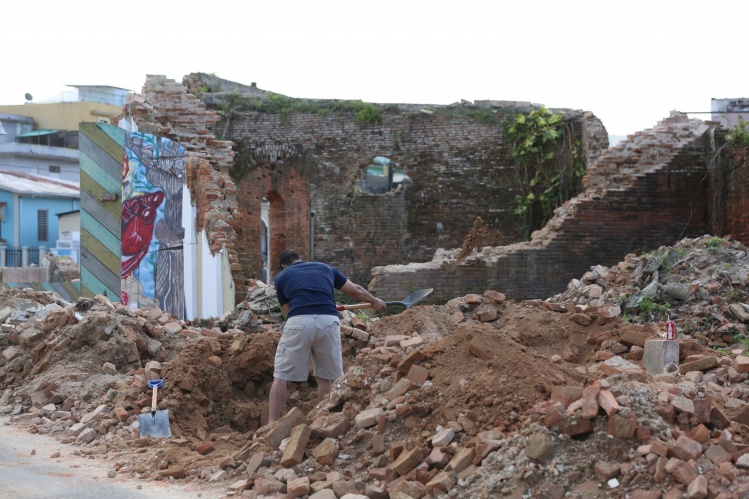 A good new year’s resolution for the United States government in 2018 would be to do justice to the commonwealth of Puerto Rico and its three million American citizens as they suffer with the aftermath of two powerful hurricanes.

It’s been said that if one part of the body suffers, all parts of it suffer. But the other parts may shake off the pain, or not even recognize it until too late. That’s when a powerful antidote is needed.

Monsignor Kevin Sullivan, who visited Puerto Rico in mid-December as executive director of Catholic Charities of the Archdiocese of New York, offered an antidote. “It’s relatively simple to articulate what needs to be done,” he said in a phone interview. “I think you need the equivalent of a Marshall Plan to rebuild the island.”

Sullivan visited places outside the San Juan area that were still wreckage-strewn and without power. While assisting the immediate humanitarian relief efforts, he also is looking for a long-term solution. He sees a model in what was officially called the European Recovery Program, which successfully rebuilt the economies of western Europe after World War II under the leadership of Secretary of State George C. Marshall, a prominent general during the war.

The elements would include a restructuring of Puerto Rico’s $74 billion debt, creation of enterprise zones and other tax incentives, and an infrastructure rebuilt to encourage economic growth.

The hard part, naturally, is getting it done.

Senator Bernie Sanders and a number of Democratic senators, including Elizabeth Warren and Edward Markey of Massachusetts, Kirsten Gillibrand of New York, Richard Blumenthal of Connecticut and Kamala Harris of California, proposed a $146 billion “Marshall Plan” for Puerto Rico and the storm-damaged U.S. Virgin Islands on November 29. A key feature is that it would aim for Puerto Rico to get 70 percent of its energy from renewable sources such as wind and solar power.

It looks like a bill that would be great to campaign on in a Democratic presidential primary, but not so good for gaining passage or even a hearing in a Republican-controlled Congress. For example, it cuts off the possibility of privatizing the insolvent, government-owned Puerto Rico Electric Power Authority. A Republican plan would likely resemble what Newt Gingrich sketched out in an op-ed article: deregulation, targeted tax breaks, exempting Puerto Rico from a federal law that raises the cost of shipping.

Someplace in between, it should be possible to reach a compromise in Congress.

Someplace in between, it should be possible to reach a compromise in Congress.
sharetweet

Both Sanders’ proposed legislation and Gingrich’s op-ed address one of the island’s most serious long-term problems: health care. Puerto Rico’s federal Medicaid reimbursement rate is lower than for the states, and its overall federal Medicaid allocation is capped, unlike the states’ payments. That leaves Puerto Rico to pick up much of the tab—one of the costs contributing to the island’s insolvency, and also to the loss of thousands of doctors who have left to work in the States.

Tax incentives are also likely part of the conversation. In 2006, Puerto Rico lost the last of a once-generous tax credit that encouraged U.S. companies to locate there, helping to plunge the island into a decade of negative growth.  (The tax credit was phased out starting in 1996 as part of a presidential-election-year deal Gingrich, then House speaker, reached with President Bill Clinton to raise the minimum wage. To assuage small-business objections to the increased minimum wage, new tax benefits were created for them—at the expense of Puerto Rico’s economy.)

“The people of Puerto Rico are suffering from painful poverty and hunger, persistent joblessness, and other social problems, as a result of the financial crisis gripping the Commonwealth's economy,” the U.S. Conference of Catholic Bishops wrote to Congress in 2015. “They bear little responsibility for the situation yet suffer most of the consequences.”

The bishops have closely followed the economic turmoil in Puerto Rico, which is more Catholic (56 percent, according to Pew Research Center) than any state in the Union. The letter echoed points Pope Francis had made in a speech to the United Nations about debt in the developing world; he decried lending systems that “subject people to mechanisms which generate greater poverty, exclusion, and dependence.” This also applies to Puerto Rico.

With the bishops’ cautious support, Congress passed and President Barack Obama signed a 2016 measure, the Puerto Rico Oversight, Management and Economic Stability Act, or PROMESA, which means “promise” in Spanish. It created a board that oversees Puerto Rico’s finances.

The board’s task was enormous: In addition to $74 billion in debt, Puerto Rico had $53 billion in unfunded pension liabilities, officials said. Its economy had contracted nearly 15 percent over a decade, and the poverty rate is around 50 percent. The population dropped by some 400,000 people over the past decade, as many people left for the mainland to seek work.

As the PROMESA-created board got started with its controversial task of trying to solve Puerto Rico’s insolvency without federal help—its plan called for reducing Puerto Rico’s spending by 30 percent over three years—hurricanes Irma and Maria hit the island in short order. Irma knocked out power to most of Puerto Rico on September 6, then Maria smashed the island on September 20 with winds of up to 155 miles an hour.

“Puerto Rico is faced with a unique set of circumstances—the largest public entity restructuring in the history of the U.S. combined with the greatest hurricane devastation to strike in 100 years,” Natalie Jaresko, executive director of the Financial Oversight and Management Board for Puerto Rico, told Congress in November.

The circumstances shout out for a solution that draws on the best ideas of the Puerto Rican people and both major political parties, and it will require difficult compromises from all involved.

On the other hand, there is a chance to do some real good for three million fellow Americans and to correct a long-standing injustice in our own land. It’s a big challenge, but one within reach of a solution.

“Puerto Rico was in a very dire economic situation prior to these hurricanes,” Monsignor Sullivan said. “… There is an incredible opportunity to rebuild the island.”