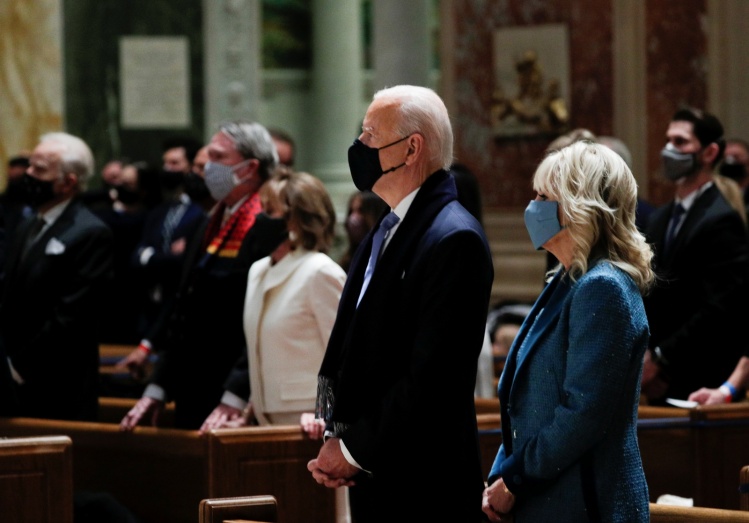 Is there anyone who hasn’t felt the impulse? You’re faced with a friend, a family member, a co-worker, or just a teenager who insists on doing something stupid despite a litany of warnings fading off into infinity. “Okay, suit yourself,” you finally feel like shouting. “Just do it! And suffer the consequences!”

That was surely the impulse behind the National Catholic Reporter’s current editorial, “Why we support the bishops’ plan to deny Communion to Biden.” At their June 16-18 meeting, the bishops are apparently determined to authorize the drafting of a document that would recommend denying Communion to Catholic politicians who support pro-choice policies—such as the current president of the United States. “Just do it,” the Reporter’s editors write. “Just do it, so that if there happens to be a Catholic remaining who is not convinced that the bishops’ conference, as it stands today, has become completely irrelevant and ineffectual,” that reality will become “crystal clear.”

I sympathize with this impulse. I agree with almost every argument the NCR editors, along with many others (including some bishops), set out against this “terrible idea,” though I have some concerns about issues the editorial leaves unexamined. The “Bar Biden Initiative” is bad sacramental theology. It confuses sacramental practice with partisan culture-war politics and creates a gratuitous obstacle to addressing urgent problems of immigration, poverty, racism, global warming, and the protection of democracy. I have to admit feeling some admiration for the editorial’s provocative flair. In a day when serious editorials have to compete with viral posts by fifteen-year-olds, perhaps only dumping a bucket of ice-cold irony on the bishops will get the necessary attention.

Even so, the editorial leaves me more than a little uneasy. Irony, which conveys one meaning on its surface and another beneath, is inevitably ambiguous and evades straightforward criticism. The NCR editorial is urging the bishops to bar Biden from Communion precisely as a way of arguing that they shouldn’t. At the same time, the editorial emits a pungent whiff of rhetorical pepper spray. And, like pepper spray, its harshness spreads well beyond its immediate target.

Usually, before our exasperation at a person’s determination to pursue a stupid course of action finally boils over into “go ahead and just do it,” we do our best to hold back, at least if the person is someone we love. There is little evidence here that NCR loves the bishops.

It is not the bishops who will suffer the consequences. As the editorial itself makes clear, it is the Church.
sharetweet

“Those of us who follow internal church politics for a living,” the editorial states, “have known for a long time that this current flock of bishops—a large majority still named during the papacies of John Paul II or Benedict XVI—is either lazy, out of touch, in the pockets of wealthy donors pushing a political agenda, or all of the above.”

It’s been a while since I followed internal Church politics for a living, so I’m in no position to dispute this description point for point. But if we assume the bishops are driven by character flaws, my list of flaws might include a few unmentioned by NCR, such as excessive zeal and moral single-mindedness. Indeed, even assuming that the bishops now qualify as enemies rather than fellow communicants—and it is a sad state of affairs when we feel that is the case—they are commended to our love. Perhaps a note of “more in sorrow than in anger” could have diluted the pepper spray.

But the chief problem with the editorial’s argument resides elsewhere. The logic of "go ahead and just do it" is that the object of one’s frustrated admonition will suffer the consequences and learn a lesson. But in this case it is not the bishops who will suffer the consequences. As the editorial itself makes clear, it is the Church. Approving a further step toward declaring the president unworthy of receiving Communion “will seal…the branding of Catholicism in the United States as a culture war project.” It will deepen the perception of many, especially many young people, that the Church is an extension of the new MAGA church peddling the Big Lie, indulging in conspiracy theories, and dividing Catholics with anti-immigrant, racist, and anti-democratic sentiments.

Never mind that no final document is in the offing now or even likely to emerge from next November’s USCCB meeting. Giving a green light to its drafting will stir a spate of media stories about the bishops versus Biden and a fresh bout of “wafer watches” of pro-choice Catholic politicians like Nancy Pelosi and Dick Durbin.

It is at this point that the logic of just-do-it gets tangled.  One premise of the editorial is that these blows, not only to the bishops’ credibility, but to the whole Church in the United States will bring the hierarchy to their senses.  Yet another premise is that the bishops are too inured to their practical pastoral responsibilities to care.

I mentioned having concerns that the NCR editorial glossed over. The editors were wise in not attempting to address abortion, same-sex marriage, and hiring policies for LGBTQ teachers.  But it also won’t do to dismiss all these questions with the label “culture wars.”  Culture wars has become the left’s code word for issues that it considers trivial or settled and only raised in politics for demagogic purposes.  Many of them had to do with liberation from religious strictures, once upon a time about evolution, in recent decades about sexuality, a subject about which the left felt quite superior until the #MeToo movement indicated that sexual predation could not be walled off from attitudes all too prevalent in enlightened culture.  It is true that political conservatives have blatantly exploited parental anxieties about the power of schooling over their own values.  It is also true that millennia-old religious moralities have predictably stumbled in responding to extraordinarily rapid changes in attitudes about same-sex relationships and marriage.

But culture matters, as the current reawakening about racism amply testifies. (Republicans are currently charging Democrats with turning race and diversity into “culture wars” issues.) And some of what gets pigeon-holed with the culture wars label, especially abortion, are issues of major consequence. The editorial could have granted as much.

To avoid the conflict within their own ranks, the bishops will be tempted to appoint a committee mixing and matching bishops with different views on public Catholics, abortion, and “Eucharistic integrity.” One Cordileone plus one McElroy, one Chaput plus one Stokes. That would ensure a mish-mash of a document that will neither get the necessary two-thirds support in November nor contribute to the Church’s enlightenment.

It would be much more interesting if the bishops followed a tactic sometimes used in government: appoint a Team A and a Team B representing contrasting views, and make each analysis public for episcopal and general Catholic discussion in the fall. That might require a breakthrough in candor. It would almost certainly be a breakthrough in clarity.

This article has been updated.