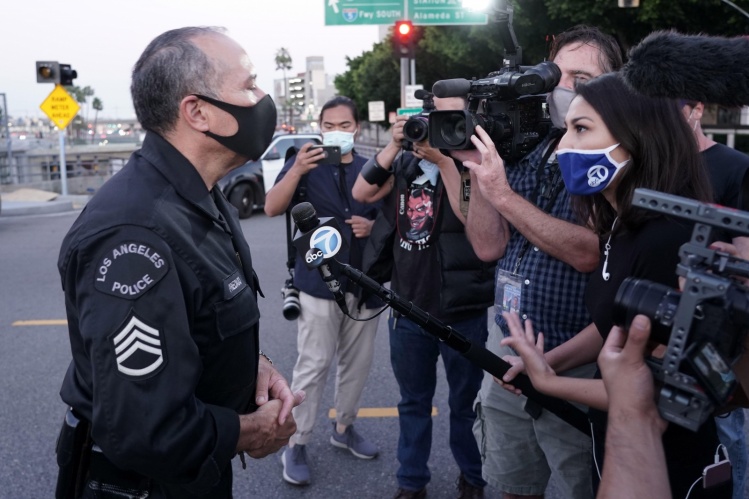 In a speech to the International Association of Chiefs of Police last October, President Donald Trump’s first applause line came at the expense of the news reporters gathered in the back of Chicago’s convention hall.

Trump’s anti-media rhetoric has thrown fuel on long-standing police resentment against the news media, which he has repeatedly defined as an “enemy of the people.” Police attacks on journalists covering demonstrations over the police slaying of George Floyd have so proliferated that it’s become obvious some officers are acting on Trump’s hints that it is okay to take the law into their own hands. He admires officers who cross the line, as he indicated elsewhere in his Chicago speech as he recounted a conversation with a local police officer about the city’s high murder rate:

I said, “You’re a tough guy.  How long do you think it would take you to fix this killing problem in Chicago?” He looked at me, he said, “One day, sir. These cops are great. They know all the bad guys, sir. They know exactly what to do. We could straighten it out so quickly that your head would spin.” I left very impressed.

Trump’s comments were aimed at undermining Chicago’s police superintendent at the time, Eddie Johnson: the president was not so subtly encouraging police officers to flout his authority. Trump has many times encouraged extra-legal violence, including against reporters. For example, he praised Republican Congressman Greg Gianforte of Montana for assaulting a Guardian reporter (Gianforte’s non-custodial sentence included twenty hours of anger-management training). He lamented to Breitbart that the “tough people” who he said support him—police, soldiers, bikers—“they don’t play it tough.” That is, “until they go to a certain point, and then it would be very, very bad.” Now some police and demonstrators are acting on their own antipathy for the news media.

The attacks against reporters are amply documented by the Reporters Committee for the Freedom of the Press, starting with the arrest of Omar Jimenez and two other CNN journalists on camera even after they offered to comply with a Minneapolis police order to move. Others have been shot with rubber bullets, tear-gassed, and pepper-sprayed, just in Minneapolis. Nationally, dozens of other incidents have been reported.

The news media’s relations with law enforcement have always been complicated, veering between glorification and vilification. By nature of their work, police officers tend to circle the wagons against outsiders, and reporters have always had to overcome that to cover crime, a news staple.

Very often, journalists run with whatever police and prosecutors give them.
sharetweet

Police bosses fall somewhere in between, needing to balance the scrutiny of the news media and demands of the public with another constant worry: the morale of police, who are often represented by union leaders who play on the anger of rank-and-file members.

“It is rather unfortunate that the large majority of the police look upon the press as unfriendly, and if a Commissioner creates the impression that he is in the hands of a newspaper cabinet, he is in great danger of losing the support of the police force,” the former New York City Police Commissioner William McAdoo wrote in his 1906 memoir, Guarding a Great City. Failing that, he wrote, “he commands a distrustful if not a mutinous army. No commander-in-chief could rely upon such troops in the day of strife.”

McAdoo thought that newspapers were not interested in upbeat stories about the police. “Go down to the newspaper offices to-morrow and tell them you know something to the credit of the police, and watch the janitor getting you into the elevator as quick as he can and heading you for the door,” he complained.

But in some ways, the relationship is symbiotic: very often, journalists run with whatever police and prosecutors give them. That can be so for breaking crime news; the Central Park Five case comes to mind. And it can be so for policy issues, too. In New York, the two tabloid newspapers, the Daily News and the Post, warred on anyone who opposed the police commissioner’s stop-and-frisk strategy.

On the other hand, there can also be relentless criticism of police in the news media. In Commissioner McAdoo’s day, this involved the Police Department’s response to police corruption. Now, it concerns complaints about police relations with communities of color (which McAdoo also dealt with).

What McAdoo did not have to contend with was a president of the United States who openly encouraged police officers to take the law into their own hands. President Theodore Roosevelt, who was in the office at the time, had built his reputation on his efforts to reform the New York Police Department while serving as commissioner.

It should not go unmentioned that violence-tinged rhetoric is also fueling attacks on police officers; deranged assailants have carried out ambush shootings targeting police in recent years and, during the current turmoil, a minority of enraged rioters have fire bombed police vehicles, among other forms of violence. “We MUST stop the anti-police rhetoric that is fueling these senseless attacks,” New York City Police Commissioner Dermot Shea tweeted on June 1. “We MUST also come together and hear each other, work together and move forward...TOGETHER.”