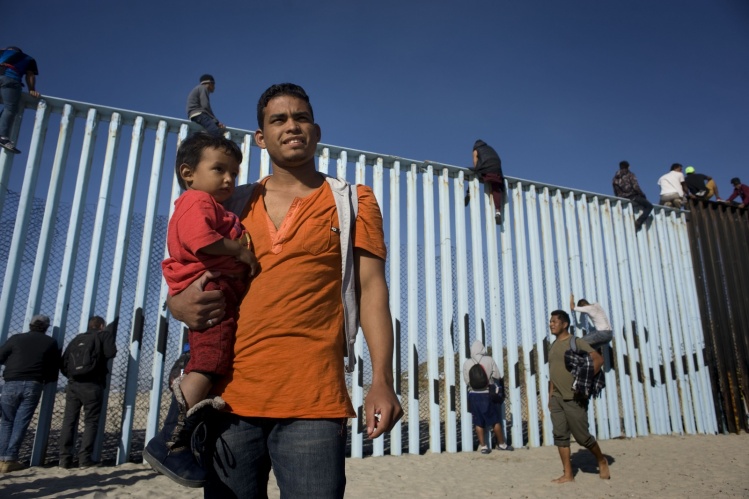 Oscar Ruiz, 22, and his son Jesser Ruiz, 1, stand next to the U.S.-Mexico border fence Nov. 13 after arriving in Tijuana with a group of about 350 Central Americans (CNS photo/David Maung)

Davíd Díaz Hernández fled El Salvador when he could no longer afford to pay the extortion money (called renta) demanded by the Mara Salvatrucha, also known as MS-13, one of the most brutal gangs in Latin America. “The amount you pay depends on the type of work you do,” he told me. He had a small shoe-repair store and was paying the gang $20 a week, about a quarter of his income. “If you don’t pay, they will kill you.”

On October 31, Hernández joined one of the caravans that was forming in Guatemala and traveled with it all the way to Casa Peregrino, a shelter in Mexico City. “One day in the caravan, we walked sixteen hours,” he said, and pointed to his feet. “Now I have blisters and they are very painful. It is very difficult to walk.” Despite the pain and uncertainty of what was ahead, he was determined to continue to Mexico’s northern border, along with about five hundred others in the caravan.

The majority of Central Americans traveling through Mexico are fleeing from what are called the Northern Triangle Countries: Guatemala, Honduras, and El Salvador. These are among the most violent countries in the world. Most of that violence is perpetrated by gangs like the Mara Salvatrucha and MS 18. Benjamín, a refugee from El Salvador, told me, “Everyone has problems with the maras.”

Not everyone thinks Mexico is a good option. For one thing, it can be almost as violent as the places the refugees are fleeing.
sharetweet

Before 2014, most Central Americans headed toward the U.S. border rode through Mexico on the freight trains collectively called La Bestia. Hundreds of people could be seen clinging to the tops of train cars or riding in between them. The situation changed dramatically in August of that year when Mexico instituted Programa Frontera Sur (PFS, the Southern Border Program). When the program was announced, Mexican President Enrique Peña Nieto said it was designed to protect the migrants themselves. Sr. Leticia Gutiérrez of the Scalabrinian Migrant Group disagreed. “The objective was to prevent migrants from climbing on the train...and to detain them,” she said, “and in that it has been successful.”

Although some Central Americans still ride La Bestia, many trains pass by with few or no people on top of them. Police and immigration agents are stationed along the tracks, preventing people from climbing on and sometimes forcibly removing people. Train companies are employing custodios (private security) to keep people off trains and have erected cement barriers next to the tracks. Migrants and their advocates report that threats and robberies by police, immigration, and security are routine. “We have known about some cases in 2016 where migrants were executed by [custodios],” said Claudia León Ang, the Advocacy Coordinator at the Jesuit Service to Migrants in Mexico. Denied access to trains, more people have been making most of the journey to the United States on foot. Although riding La Bestia was dangerous, the presence of hundreds of people afforded some protection. After PFS started, people began traveling alone or in small groups, leaving them more vulnerable to predation. “It was bad before. It is worse now,” León Ang told me. It’s estimated that 80 percent of the people making the journey through Mexico will be assaulted. According to León Ang, “Seven in ten women will be raped.” This explains why people began banding together in what have come to be described as “caravans.” “People are aware of the dangers of the journey,” said Francesca Fontanini, a spokesperson for the United Nations High Commission on Refugees (UNHCR). “Traveling alone isn’t secure. Members of a caravan...feel more protected; there is a decreased risk.”

The first caravan left Guatemala in mid-October and the largest, estimated at about seven thousand people, reached Tijuana in mid-November. Several smaller caravans have been traveling through Mexico since then. The one that arrived at Casa Peregrino left Guatemala on October 31, reaching Mexico City on November 18. “One day walking, one day on a bus,” said Fernando, a twenty-five-year-old Honduran who showed me the scars he has on his chest, knife wounds courtesy of Calle 18. The caravan is believed to be the fourth to have reached the city and at its peak included about seven hundred people.

I asked several people traveling with the caravan how it was organized. “It is not organized,” said Luís, a Honduran. “People just seem to know when to leave, when to stop walking.” Rafaél, a migrant from El Salvador added, “Somebody’s in charge but I don’t know who.” Although the journey through Mexico is still difficult for those traveling in a caravan, it has at least been safer. “Mexican people have treated us well,” Luís told me. Fontanini, of the UNHCR, confirmed this. “People in the caravan were very impressed with the help they received from Mexicans,” she said. “They were given food, clothing, rides.” A large police presence has also ensured people’s safety; dozens of officers were posted inside and outside the shelter.

The accommodations at Casa Peregrino are basic. Women wash clothes by hand in concrete sinks and hang them to dry on lines, walls, or banisters. “We sleep on the floor on a thin mattress,” said Fernando. “We are migrants, we do not get beds.” There isn’t much to do except wait, so people sit and chat or play checkers out front. More enterprising people buy packs of cigarettes and sell singles, called sueltos, for five pesos, or three cigarettes for ten pesos (about fifty cents).

Many line up at a table where the UNHCR provides information about obtaining asylum in Mexico. Because the probability of getting asylum in the United States has dropped to just above zero, applications for asylum in Mexico have skyrocketed. As recently as 2015, out of the four hundred thousand Central Americans who entered Mexico, only 3,424 applied for asylum there. In 2017, when between 450,000 and 500,000 Central Americans entered the country, there were 14,596 applications, of which 2,825 have so far been approved. (The final number isn’t available yet.) “Through June of 2018, there were already fourteen thousand applications,” said Fontanini. Most of these were filed in Tapachula, Chiapas, Mexico’s southernmost state. Applications are supposed to be reviewed within forty-five working days but the wait is now stretching to six months. According to León Ang, some applicants have to wait as long as a year.

But not everyone thinks Mexico is a good option. For one thing, it can be almost as violent as the places the refugees are fleeing. Homicides are at an all-time high. Nor are there many good work opportunities for the migrants. “You cannot earn much here,” said Mauricio, a Salvadoran bus driver. He said he’d return to El Salvador if he can’t get asylum in the United States.

Some people have already returned. Audán León, a volunteer with Puente Humanitaria, told me that, just a few days after reaching the shelter, about a hundred people—exhausted from the journey, uncertain about asylum, and tired of waiting—left to go home. Many who remain say they will apply for asylum in Canada, although that may not be a realistic option. Archbishop Leonardo Marin Saavedra, of the Latin American Anglican Church in Canada, visited the shelter one day and announced that, when he returned to Toronto, he would “present a proposal to [Prime Minister] Justin Trudeau” that Canada accept Central American asylum-seekers, saying that Canada has planes and boats it could use to transport people there. He urged Central Americans to “have faith” because the process would take at least three months. When I asked if his church would support migrants remaining in Mexico during that time, he texted, “The Mexican government or the international community must solve the migrants’ stay in Mexican territory...we HAVE [emphasis his] no resources.” Fontanini said that the UNHCR had no information about the archbishop’s proposal, and neither did the Canadian embassy. When I asked if he already had a meeting scheduled with Trudeau, Marin Saavedra texted back, “No.” 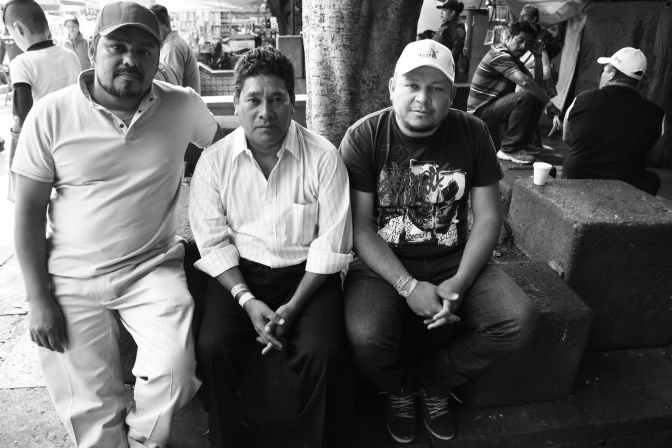 The violence in their home countries and the dangers they face in Mexico have not shaken the migrants’ faith. The shelter is across the street from the Villa Guadalupe, the most revered religious site in all of Mexico. The serape with the painting of the Virgin Mary hangs inside the basilica there. Many, probably most, of the Central Americans in the caravan visited the basilica to plead for Mary’s help. Alejandra Dominguez was one of them. When I asked if she thought she would be able to cross into the United States, she replied without hesitation: “It is up to God.”

People in the caravan know what lies ahead and they know Mexicans may not always be as welcoming as they were a month ago. The caravan in Tijuana, the largest one to date, is straining that city’s resources and has faced backlash from residents. The U.S. Border Patrol used tear gas to repel a group from that caravan as it attempted to force its way into the United States. Around five thousand U.S. soldiers line the U.S.-Mexico border waiting to block what President Donald Trump calls an “invasion.” When informed that heavily armed soldiers awaited him at the border, Fernando angrily replied, “What do we have?” He lifted up his shirt showing his bare chest. “Nothing.” Whenever Trump’s name was mentioned, it elicited a string of unprintable invectives. The nicest thing I heard said about him was that he is “one [expletive] angry person.”

It’s very unlikely that Mexico and the United States have seen the last of the caravans. “I think that this will be a way for people to migrate that will continue,” said Gabriela Hernandez, the director of the Tochan, a shelter in Mexico City. “It benefits people; it’s better for them.” She said that, in addition to making the journey safer, caravans have “made visible migration that had been invisible.” Initially, that was a plus. But the caravans are now attracting negative attention. Mexican police and immigration agents are now stopping at least some of them. One with about two hundred people was stopped in Metapa, Chiapas. Almost everyone in it will likely be deported. Some fear that if it becomes apparent that traveling in a caravan attracts police and immigration agents, people will go back to traveling alone. And that will only increase the many risks migrants already face.

Despite the dangers, despite knowing that getting into the United States is extremely difficult, the Central Americans I met at Casa Peregrino are still able to maintain hope, trusting that God or luck will favor them. As I parted from Mauricio and his two friends, he called out to me, “See you in the United States.”