It Could Get Worse 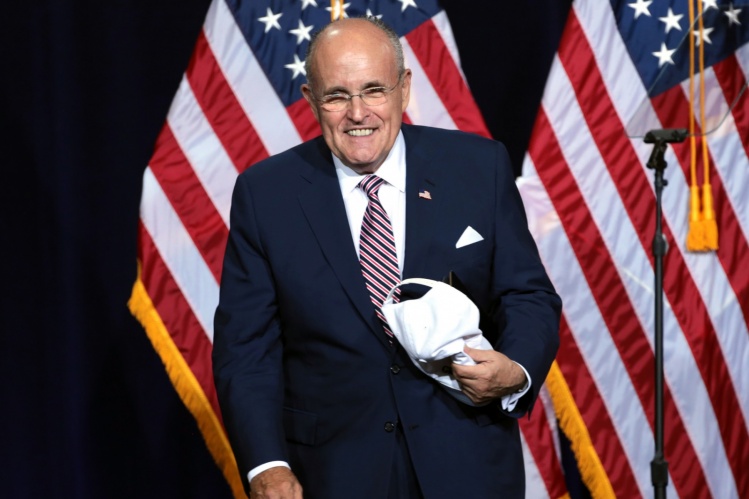 Rudy Giuliani speaks to supporters at an immigration policy speech hosted by Donald Trump in Phoenix, Arizona in 2016. (Gage Skidmore)

Rudy Giuliani is being portrayed as some sort of circus act in his new role as lawyer for President Donald Trump. There was indeed a slip-on-the-banana-peel quality at the outset, but I see something else as well: an experienced lawyer alarmed at how vulnerable his client is.

Giuliani would know how damaging this can be. As both a prosecutor and a politician, he made an art form of exploiting erroneous financial disclosure forms. His 1989 campaign for mayor of New York, begun the same year he resigned as U.S. attorney in Manhattan, leaned heavily on his accusation that Democrat David Dinkins had filed a false disclosure report three years earlier when he became Manhattan Borough President. Dinkins had allegedly misreported details of the transfer of his stock in a cable television company to his son.

Under the guidance of his media advisor, Roger Ailes, Giuliani asserted this was a “crime” and called for an investigation. “We need a mayor who has nothing to fear from prosecutors,” Giuliani said, accusing Dinkins of a “cover-up” and tax evasion. “You can’t evade a subpoena,” he declared. Dinkins was elected mayor and spent the first year of his administration fending off a federal grand jury investigation that produced no charges. To the best of my recollection, he didn’t complain publicly that he was being investigated by a Republican-run Justice Department where Giuliani had been a major figure for the previous decade.

Similarly, Giuliani’s boss at the Reagan administration Justice Department, Attorney General Edwin Meese III, landed in hot water for failing to disclose an investment on his financial disclosure form. This failure raised questions about whether Meese had assisted a corrupt Bronx defense contractor, The Wedtech Corporation, while counselor to Reagan in the White House. A special prosecutor was appointed, but Giuliani, the U.S. attorney in Manhattan, launched his own probe of a close friend of Meese, lawyer E. Robert Wallach. The special prosecutor never charged Meese, but Giuliani obtained charges that Wallach took payments from Wedtech to influence Meese. After two trials, the charges against Wallach were dropped. Giuliani was able to portray himself as a prosecutor willing to go after his own boss.

He sounds like Alan Dershowitz, who at least has the virtue of being consistent
sharetweet

Giuliani’s involvement with the thicket of legal issues surrounding independent counsels goes back to at least 1981. In his role as the number-three official in the Justice Department, he testified before Congress that the Watergate-era Ethics in Government Act needed to be changed so that only the attorney general (not the courts) could decide on appointing a special prosecutor. Bringing in an independent prosecutor to investigate sensitive cases would “undermine public confidence in the ability of the Attorney General and Department of Justice personnel to carry out their primary responsibilities in all cases,” he said. This would lead to “long-term public skepticism” about the justice system.

That was then, of course, and these days, Giuliani isn’t so worried about the Justice Department’s credibility. He sounds like Alan Dershowitz, who at least has the virtue of being consistent: the Harvard law professor from Brooklyn has long attacked federal law enforcement officials—the U.S. attorney’s office for the Southern District of New York was a favorite target—as cheaters willing to use dishonest tactics, including orchestrated media campaigns, to win convictions. Dershowitz had assailed Trump’s lawyers for, in his view, not standing up to Mueller. As Carl Sandburg said, “If the facts are against you, argue the law. If the law is against you, argue the facts. If the law and the facts are against you, pound the table and yell like hell.”

Somewhere in there is a defense for Trump, and he is entitled to one. Federal law, with its broad conspiracy statutes and myriad of technical-but-criminal violations, grants prosecutors incredible power. As U.S. attorney in the 1980s, Giuliani showed just how powerful those laws can be; he set a pattern for the succeeding generation of federal investigators—like James Comey, who initially admired Giuliani when starting his career as an assistant U.S. attorney in his office.

Giuliani has used his media access to try to limit the Mueller investigation. Aware that complex political corruption investigations can take several years—and that, with time, lower-level white-collar co-conspirators can usually be coerced into cooperating—he has attempted to rush the probe. But one investigative door often opens another; as long as Rosenstein approves the scope of the probe in his role as acting attorney general for this matter, Mueller has jurisdiction. The Republican maneuvering against Rosenstein only confirms suspicions that a scheme is afoot to obstruct justice.