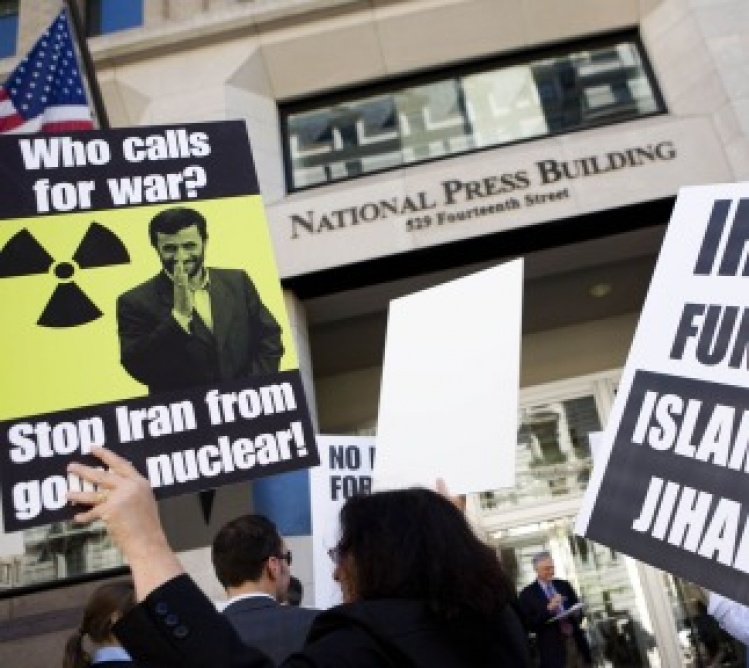 A Gallup poll issued this month says that 99 percent of the American public now has become convinced that Iran's civilian nuclear program will threaten "the vital interests of the United States in the next ten years." Eighty-three percent say this will be "a critical threat." Why?

Because Iran in the next decade will rain down nuclear missiles on American cities from coast to coast? Or sacrifice its own survival by making a suicide attack on Israel, which possesses what may be the fourth largest nuclear arsenal in the world?

Whatever the expectation, this fear of Iran in America is apparently now greater than the level of American fear of the Soviet Union -- which actually could have devastated the United States with a nuclear attack -- as reported by Gallup during the most dangerous of the Cold War years.

Never mind that this is a totally irrational fear. According to the combined conclusions of American intelligence agencies, plus the consensus of international intelligence assessments, Iran does not have a nuclear weapons program. It has a civilian program. The conversion of this civilian program to military purposes would be a lengthy, internationally visible process, and even then would at best furnish Iran only with a retaliatory threat, a deterrent, useless for aggression.

Iran will be our next war, if American neo-conservatives, certain advisers to the Obama administration, and what would seem the all but total membership of the U.S. Congress, led by Benjamin Netanyahu and his new government in Israel, have their way in the months to come. All acting with the enthusiastic support -- or so it seems -- of the American public, which one might think has had enough of war, after nearly seventy years of it (including the Korean War), with little interruption, losing all of its wars, and gaining nothing.

Take the quasi-war that has gone on against Cuba since 1959. Raul Castro has just announced that he will retire at the end of the five-year presidential term to which he has just been elected. His invalid brother, Fidel, seems unlikely to survive Raul, and Raul has announced who should succeed him if he does not complete his term. The liberalization and partial democratization of Cuba begun under Raul is expected to continue, whoever is president.

The great half-century struggle between the United States (population three hundred and fourteen million) and the Republic of Cuba (population eleven and a half million), a struggle once hysterically feared as likely to provoke a nuclear war that would blow away both the United States and the Union of Soviet Socialist Republics (and Cuba along with them) is over, or soon will be over -- Cuba the winner on points as a result of sitting there and taking the worst the United States could do to it through decades of embargos and sanctions.

What was it all about, and what has it accomplished?

In 1952 a young lawyer, Fidel Castro, brought suit in Cuba to overthrow the U.S.-supported dictator, Fulgencio Batista, for cause of corruption and tyranny. The suit was disallowed and Castro arrested. He said, "History will absolve me."

In 1955, Batista released political prisoners. The Jesuits who had educated the Castro brothers prevailed on Batista to include them in the release.

The two brothers sought military counsel from a veteran of the Spanish Civil War, and in 1956, with friends, launched what would become a successful armed rebellion. After Washington had withdrawn its ambassador from Havana and imposed an economic embargo, Fidel Castro proclaimed a liberated Cuban republic.

To summarize what turned an apparently blossoming friendship with the United States to bitter enmity: Castro nationalized foreign holdings, sending American business into uproar; he was befriended by the Soviet Union, and so announced that he was a Communist; frightened Cubans fled the country; the Eisenhower administration decided that Castro had to be overthrown; and the CIA prepared a ham-handed invasion that predictably failed, humiliating the United States.

The Cuban missile crisis that followed in October 1962 was produced by what Leonid Brezhnev considered an effort to protect Cuba from invasion, and an American effort to protect the United States from a Soviet nuclear attack. Each side misread the other's intentions.

All this provided a devastating example of the power of propaganda, ideology, intellectual intoxication, greed, and political fantasy to bring nations to ruin. Cuba escaped ruin -- barely.

Vietnam, Cambodia, Iraq, and Afghanistan did not escape. All later were subjected to the full blast of conventional American military power as a result of unsubstantiated ideology and false propaganda; Iraq was wrecked as punishment for not having weapons of mass destruction. They all are still trying to put their ruined countries together again and are still mourning their dead.

In October 1963, shortly before his assassination, President John Kennedy told a French interviewer (Jean Daniel of the weekly Nouvelle Observateur), "I believe that there is no country in the world ... including any and all the countries under colonial domination, where economic colonization, humiliation, and exploitation were worse than in Cuba, in part owing to my country's policies during the Batista regime. ... [T]o some extent it is as though Batista was the incarnation of a number of sins on the part of the United States. Now we shall have to pay for those sins."

We have paid, and the Cubans paid ever since much more heavily than Americans -- to no purpose. Now, Americans seem ready to make the Iranians pay for the price of our obsessions. We will pay, too, as we always have before. Will there be anyone someday to apologize?