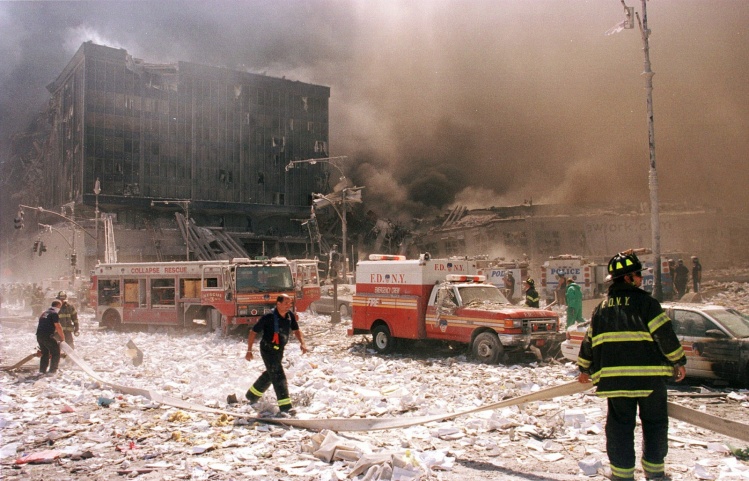 This article was originally published in the October 12, 2001 issue if Commonweal.

The toxic fumes were heavy, the traffic funereally light. I rode my bicycle up New York’s Tenth Avenue and cut in toward the church. In my backpack I had a Jerusalem Bible and a Kryptonite lock. Around my neck I had a yellow T-shirt, pulled up over my nose and mouth as though I were a pirate, not a lay preacher trying to find a few hundred words for catastrophe.

I was on the way to the weekly meeting of the Community of Sant’Egidio in a church on Manhattan’s West Side. The community’s story has already been told in these pages (see November 18, 1994): its founding in Rome after the worldwide student uprisings of 1968; its growth to thirty thousand members in Italy and another thirty thousand abroad; its mediation during civil wars in Africa; its nightly meetings in Santa Maria in Trastevere, which make the ancient Roman basilica seem like a neighborhood church again.

Our group in New York has half-a-dozen members. We arrange folding chairs in a semicircle in the far corner of the church, beneath a spotlit mosaic of Christ proffering his Sacred Heart. We sing, recite, pray, and petition the Lord—though the expression seems awfully grand for our petitions, which we read from Xeroxed fliers now worn as soft as vellum. One of us reads a Bible text and gives a brief commentary on it.

Wednesday, September 12, it was my turn to preach. The day before, terrorists had struck the World Trade Center and the Pentagon, and the city was staggering. The offices where I work had been closed. Police had cordoned off the downtown neighborhood where I live, and the streets were quiet, expectant. At home, stunned like everybody else, I browsed in the Bible.

Now, in the church, I read the biblical text I’d chosen: Matthew, chapter 2, verses one through eighteen—the massacre of the innocents. I explained why I had chosen it. People on the street were comparing the Trade Center blast to Armageddon. The airwaves were crowded with God-talk. The mayor, fumbling for words of succor at a press conference, had suggested that God’s will was somehow behind those who got out alive. Before long lawyers would be invoking the “act of God” clause in insurance policies and breached contracts. It seemed wise to avoid speaking too confidently about God just now.

Matthew’s Gospel, thankfully, does not ascribe the massacre to any divine plan.
sharetweet

Better to speak of the massacre of the innocents. For that, all the evidence suggests, is what it was. A powerful man ordered the deaths of thousands of innocent people to further his own ends, just as King Herod did after the Christ child was born.

The Catholic faith is oriented around the notion that death ultimately makes sense. Death is not the end of life. Death is the way each of us shares the experience of God, the way God shared our experience in dying for us. Death for the sake of another is the most complete self-sacrifice this life has to offer.

That seems to me to be a reason why the deaths of several hundred firefighters and police officers brought such an outpouring of emotion in the days after the catastrophe. Those deaths conformed to the Christian pattern of supreme self-sacrifice. The firefighters, as they hastened toward the flames, were ready to give their lives for others.

But what of the thousands of ordinary people who died in the explosions, the flames, the abrupt collapsing of the towers? No religious person, it seems to me, would presume to say that those deaths made sense or served any higher purpose.

Better to speak of the massacre of the innocents. The Gospels, biblical scholars say, communicate through the arrangement and juxtaposition of texts as much as through the texts themselves. So it is in this episode. On page two of the New Testament we encounter swift and pointless mass death. No sooner is a child born than a thousand others are murdered. One has only to imagine the pain of those first-born male children as they were killed or the anguish their families felt to know that there is no way to say such deaths make sense.

Matthew’s Gospel, thankfully, does not ascribe the massacre to any divine plan. Rather, it places those deaths in a kind of counterpoint with Christ’s death. The implication, theologically, is that only through a death like Christ’s can such deaths be avenged, such wrongs set right. But the implication for our lives, it seems to me, is that only through a life like Christ’s can such wrongs be righted, such senseless deaths set in counterpoint.

The biblical massacre of the innocents now has a new set of references. Last month, the innocents were office workers in Manhattan; this month, they are people ruled by despots in Afghanistan and elsewhere. The character of the “war on terrorism” will likely depend on how far our president is allowed to stretch the notions of “combatants” and “intention” and “collateral damage,” indeed of “innocent” and “guilty,” so as to avoid having to bear responsibility for the taking of innocent lives. Will he, will we, be more like Christ, or more like Herod? He, and we, will have to decide. The fate of the innocents, those still alive and those already dead, depends on it.

From Trastevere to Texas