'The War on Heresy'
By J. Patrick Hornbeck II
Books 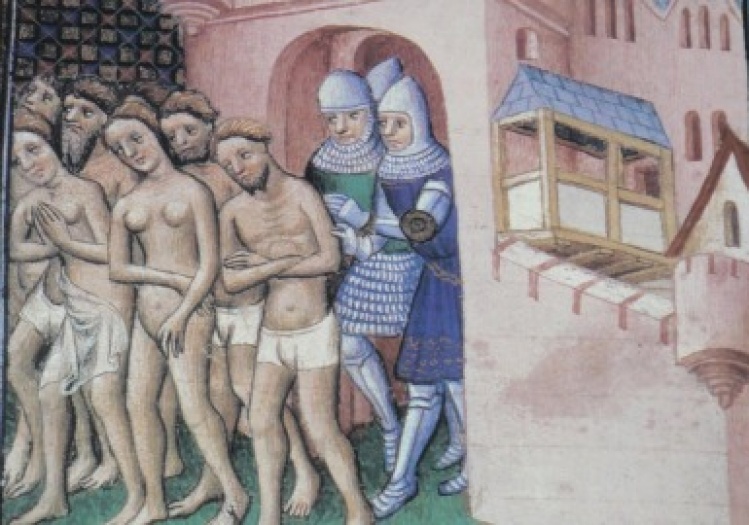 Medieval heresy is back in fashion. From the conspiracy theories of popular novels to the Pays Cathare tourist billboards in the south of France, the men and women who suffered ecclesiastical aggression in defense of their supposedly heterodox beliefs have recently been lionized as never before.

Yet most of what we think we know about these heretics—their beliefs, their practices, even what they were called—is wrong, argues the celebrated British historian R. I. Moore. Few scholars are better positioned to make such a judgment. It was Moore, after all, in his previous works The Origins of European Dissent (1977) and The Formation of a Persecuting Society (1987), who helped construct what has become the standard narrative of the “rise” of heresy in eleventh- and twelfth-century Europe. Now, forthrightly calling that earlier scholarship “fatally flawed,” Moore has set out to reread the documents that shaped the Western church’s engagement with heresy. His findings cast doubt on long-held assumptions about heresy, its practitioners, and the church’s response to it, even as they dissect the complex political, social, and religious interactions that formed those assumptions.

In particular, The War on Heresy underscores the disparity between the widespread fear heresy provoked among medieval churchmen and the relative infrequency with which heretics were actually persecuted and punished. Moore begins his account in 1022, when more than a dozen people were burned for heresy in Orléans, on the orders of King Robert II. Belying the popular view of such persecutions as part and parcel of medieval life, Moore shows that the executions represented the first time in nearly six hundred years that Christians had employed the death penalty for heresy. Even by 1163, he notes, when five “Cathar” heretics were burned in Cologne, it “was by no means a commonplace event.”

Such observations typify Moore’s way of undermining conventional wisdom. Traditionally, historians have asked why heretics became numerous early in the second millennium of Christianity, and even recent histories divide heretics into categories that would have been familiar to the inquisitors of the Middle Ages: Cathars, who believed in dual, opposed gods and abstained from sex and meat; Waldensians, who adopted a life of extreme poverty and abjured ecclesiastical obedience; heretics of the Free Spirit, who believed one could attain a state of spiritual perfection; and so forth.

Moore reveals these questions and categories to be the products of an inquisitorial mindset whose practitioners, trained in the writings of the church fathers and in scholastic theology, operated with fundamentally flawed assumptions. For instance, in the 1240s, inquisitors in the south of France routinely asked witnesses whether they had ever “adored” heretics—“looking for evidence,” Moore writes, “of a ritual of which they had read in their scholastic texts, called the melioramentum,” believed to signify allegiance between a heretic and a disciple. Yet, as Moore observes, the formal bow that the inquisitors called the melioramentum was merely part of the elaborate system of cortezia, or politeness, that Provençal society expected of its members. Likewise, inquisitors spoke of what they called “perfected” heretics, peripatetic leaders who included heretical “bishops” and “elders.” But these too were categories that church officials themselves had developed, in an attempt to reconcile what they discovered in their interrogations with what their textbooks told them heretics must be like.

Texts are at the heart of Moore’s study, and he reads them carefully, exploring the complex ways they significantly influenced the identification, trial, and punishment of heresy suspects. For example, Moore traces the characterizations of Dietrich of Deutz, a chronicler in Cologne who identified the persons burned there in 1163 as “Catafrigians or Cathars,” back to Eckbert of Schönau, whose Sermons against the Cathars provided a template for many contemporary writers. But Eckbert himself was relying on another writer, Eberwin of Steinfeld, whose descriptions of heretics depended in turn on Augustine and his extensive writings against the Manichees six centuries earlier. Thus Dietrich—not to mention the modern historians who have relied on him and others like him—was at best the fourth participant in a centuries-long game of “telephone,” at each stage of which various political and theological influences could distort the facts of a case.

Such confusions all but ensure that we will never know exactly what the heretics of the Middle Ages thought about God, faith, and the church. Indeed in some cases, Moore makes clear, heresy accusations were hardly about heresy at all. In medieval Europe, “conditions were thoroughly conducive to the circulation and acceptance of all manner of religious ideas,” while church leaders’ capacity “of controlling or correcting them, on the other hand, was limited.” Many of the instances where heterodox religious ideas drew active persecution turn out to have involved external factors: rivalries between local lords, as in the case of the noble families of Toulouse and Béziers; resistance on the part of some clergy to church reform, such as clerical celibacy; and competing attempts to re-enact what medieval people called “the apostolic life.”

It seems obvious, in retrospect, that a history of medieval heresy should take up the ways in which medieval sources constructed both the concept and the categories of heresy. Yet Moore’s approach is historiographically a novel one. Many scholars, even recent ones, have assumed uncritically that if a medieval author wrote about “Cathars,” there must have been people who would have answered to that name and would have professed most of the beliefs of which Cathars were accused. Moore lays bare the fallacies behind such assumptions. The War on Heresy does more than represent the culmination of decades of study. In showing how certain trends in medieval Christianity were singled out for criticism, and how the full coercive power of the church came to be directed at them, it demonstrates that heresies have far more often been invented by the fearful than practiced by the accused.