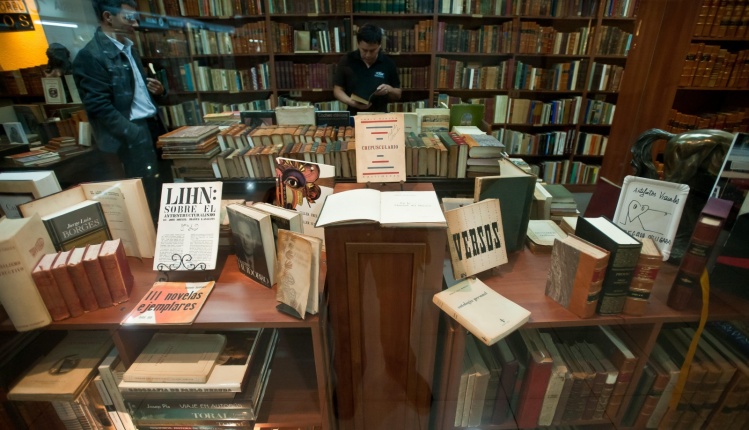 Chile, like Ireland, is a sparsely populated, geographically isolated country that produces a staggering number of poets. Two Chileans have won the Nobel Prize: Gabriela Mistral in 1945 and Pablo Neruda in 1971. Mistral’s image appears on the country’s currency; Neruda’s homes form an integral branch of the Chilean tourism industry. Other celebrated poets include Nicanor Parra, who came from a family of performers and was regarded as something like a wizard; Enrique Lihn, a cosmopolitan figure who connected generations of poets; and Raúl Zurita, still living, who has had his poems scrawled in the sands of the Atacama Desert at enormous scale, a cross between concrete poetry and art installation. In a manner almost unthinkable for U.S. poets, their Chilean counterparts can and do achieve folk-hero status.

This reverence for poets drew me to Chile. Adrift in my twenties and eager to become a great poet myself, I moved to the country’s capital, Santiago. To make a living, I taught English to students, businessmen, and naval officers. After class, I prowled the city’s bookstores and cafés, buying volumes of Chilean poetry that I read with the aid of a Spanish-English dictionary. I didn’t manage to become a great poet. But I did get to observe up close a new generation captivated by the romance of Chilean poetry, mostly thanks to a Chilean poet who left the country long ago, and who never wrote much poetry either.

At the time I was living in Chile in the mid-2000s, Roberto Bolaño, already famous in the Spanish-speaking world, was rising to international prominence. Bolaño was born in Chile, moved to Mexico with his family as an adolescent, and went on to lead a peripatetic life across the globe. He died in 2003 at only fifty years old, and immediately passed into legend. The Savage Detectives, the novel that first made him famous, was a loosely autobiographical tale about radical young poets in Mexico. But Bolaño wrote poetry before turning to fiction, and his fiction mythologized poets as outlaws, figures living on the edge of society in pursuit of beauty and truth. The next generation of Chilean writers couldn’t help but see Bolaño’s prominence as an opportunity to reach a wider, global readership.

No Chilean writer has navigated the contours of the post-Bolaño moment, its promises as well as its limits, as deftly as Alejandro Zambra. Like Bolaño, Zambra began as a poet before turning his talents to fiction. He too writes about writers, poets, and students of literature, shuffling through life with slim volumes of verse in their back pockets. But the mood of Zambra’s work is wholly unlike Bolaño’s, which is precisely what makes Zambra so interesting. Whereas Bolaño’s poets are outlaws, diving outside of polite society and into the churning waters of capital-H History, Zambra’s poets are bystanders. They are reticent, even timid, fearful that the moment for greatness has passed them by, and that they must endure this sense of belatedness for the rest of their lives.

The year 1973 was a decisive one for the twentieth century, and an especially dramatic one in Chile. Salvador Allende, the democratically elected socialist leader, was ousted and killed in a violent coup led by Augusto Pinochet, a right-wing military leader supported by the CIA. On September 11 of that year, La Moneda, the seat of the president located in downtown Santiago, was bombed by fighter jets. Pinochet would imprison thousands of citizens—including, so goes the legend, Bolaño, who had traveled back from Mexico to join in the struggle against the dictatorship and was arrested soon after arriving. But his jailer just happened to be a childhood friend, and he let Bolaño go after a week. A thrilling, dramatic story.

This fear of coming up short was precisely what always thrilled me about Zambra.
sharetweet

Zambra, however, was born in 1975. He grew up in the shadow of the dictatorship, and along with an entire generation of Chileans, came to know it intimately, while largely being unable to resist it in dramatic fashion. In 1991, Pinochet stepped down after losing a fair election, and the country made hesitant steps back toward democracy. As Zambra began to write, first poetry and then fiction, his work depicted characters who felt untested, who worried they didn’t measure up to the lofty examples set by world-bestriding figures like Bolaño.

This fear of coming up short was precisely what always thrilled me about Zambra. Bonsai, his first novel, was a slim work that portrayed a relationship, from first romance to eventual dissolution, in less than a hundred pages. The protagonist is a writer, but he’s no savage detective. He goes to classes, takes an editing job, and lies to his girlfriend. I encountered the book in Chile, while I too was failing to become a great, world-historical literary figure. I even saw Zambra give a reading, and during the question-and-answer period, I asked him a question in such profoundly broken Spanish that he didn’t understand me.

Chilean Poet, from its title onward, burrows deeper into such questions of literary inheritance and generational anxiety. Domestic relationships take center stage, as is generally the case in Zambra’s work, but here he enlarges the scope of the story to span from the early nineties to the present day.

Gonzalo is a Santiago teenager from a lower-middle-class background. His girlfriend, Carla, is the daughter of a lawyer and belongs to the upper-middle-class. Their relationship consists of inside jokes and furtive embraces, but when they finally manage to consummate it, Carla loses interest. Not even Gonzalo’s painfully earnest teenage poetry can bring her back. A decade later, Gonzalo and Carla meet again at a nightclub. They hit it off, and their relationship achieves a new level of depth and comfort. There is, however, one practical obstacle: Carla already has a son, Vicente.

Vicente is not Gonzalo’s son, though Carla does have a bit of fun with him when she dangles the possibility that Vicente is the result of their teenage fling. It’s clear that the math doesn’t work out, though, and Carla knows precisely who the father is—a ne’er-do-well named Leon. Carla tells Gonzalo that she understands if he doesn’t want to continue the relationship, but he warms to Vincente. He moves in with them and, even though he and Carla don’t marry, he takes on the role of stepfather to Vicente with devotion and care. Such makeshift family structures are fairly common in Chile; individuals often distrust the institution of marriage without quite knowing what to replace it with. That makes sense, in a way: growing up in a dictatorship could make anyone skeptical of societal norms.

Gonzalo makes a modest living by teaching poetry and literature classes. He still retains his youthful literary ambitions, though he does little to pursue them. In a burst of creativity, however, he composes an entire collection of poetry titled Memorial Park, naming it after the park near the house where he lives with Carla and Vicente. The book is published in a very limited run, and Gonzalo personally gives copies to his local bookstore, Metales Pesados. (A real place, by the way—I bought many books there myself.)

Just as things seem to be settling into place, Gonzalo makes a decision that upends the domestic life he and Carla have jerry-rigged together. Without telling Carla, he applies for a fellowship in New York City—and he gets it. He tries to convince her that it might be a good idea for the three of them to go there together, but Carla is angered that he kept it from her, and she feels manipulated when he springs the news on her all at once. As swiftly as their relationship resumed, it ends again.

That’s the first half of the story. In the second half, Gonzalo recedes from the forefront, and Vicente steps forward to take his place. Inspired by the books Gonzalo left around the house, Vicente devotes himself to poetry with even more dedication than his would-be stepfather. He attends workshops, befriending fellow poets and immersing himself in the tendentious, tightly knit community of Chilean poets. He meets an American journalist named Pru, giving her the idea to write a piece about the country’s many poets. The whole episode appears modeled on Bolaño’s The Savage Detectives, where a chorus of friends and acquaintances give accounts of the author’s fictional alter ego.

Thanks to Pru’s introductions, Vicente lands a job at Metales Pesados. Scanning the shelves, he discovers—of course—Memorial Park. The book has sat there for years, unsold. But Vicente picks it up, reading Gonzalo’s book over and over, especially one poem that’s about Vicente himself. When Gonzalo, back from New York, walks into the bookstore, Vicente reestablishes their relationship. Vicente, Gonzalo has to admit, has become a better poet than he ever was. He was never quite a stepfather to Vicente, as he and Carla never married, but he was something better: a step-poet, giving Vicente a model to follow, and eventually surpass.

Lines of poetry on paper, rather than blood flowing through veins, connect Gonzalo to Vicente, and, it’s implied, to all other Chilean poets, from the celebrated to the obscure. It’s a moving image, especially for how it deftly folds in the sense of belatedness, of coming up short, that is woven throughout Zambra’s work. And for all the book’s Chilean specificity, it feels broad in its appeal, with the focus on literature and relationships recalling Ben Lerner crossed with Sally Rooney. At some point, everyone feels like they come up short. That’s when you need your loved ones, poets or not, at your side.

Life as a House