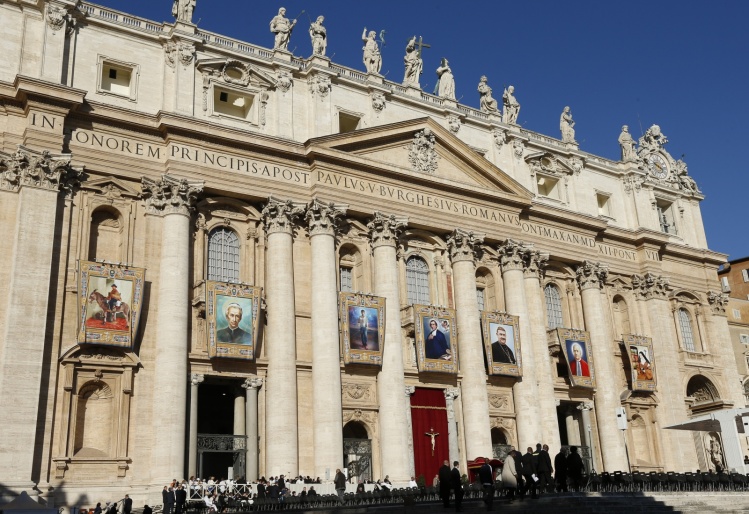 Tapestries of seven new saints hang from the façade of St. Peter’s Basilica before a canonization Mass.

In this well-researched and intricately argued scholarly book Donald S. Prudlo focuses on two complexly related concerns. First, that of reconstructing the development whereby, from the mid-twelfth to the late-thirteenth centuries, the popes came to play an increasingly pivotal role in the process of recognizing individual members of the faithful as exemplars of Christian living and of formally canonizing them, therefore, as saints. And what papal “canonization” meant, he tells us, was “an enrolling into the list of men and women recognized in public liturgical worship [throughout the universal church] as exemplars of Christ and intercessors in heaven.” His second (somewhat more fraught) concern, is to chart the growth in the thirteenth century of resistance by orthodox critics and heretical groups alike to the exercise of that papal role in canonization, as well as the way in which, in response, members of the Franciscan and Dominican mendicant orders, anxious to vindicate the authenticity of their saints, began to place great emphasis on the quality of “certitude” attaching to papal canonization. In so doing, they came increasingly to pose the question as to whether such papal canonization decisions were not indeed infallible in nature. To that question, by the early fourteenth century the affirmative answer had come among them to carry the day, and eventually, Prudlo claims, that view of the matter was to become “the common...opinion” among theologians and “Catholic thinkers of stature.”

As far as the former of these concerns goes, the narrative the author proposes is comparatively straightforward and clear. During much of the first millennium of Christian history, when it came to the recognition of sanctity, spontaneity seems to have been the order of the day. That is to say, the initiative was usually taken at the popular local level in Christian communities where cults of martyrs, confessors, and other saintly individuals had welled up and found expression in rituals and offerings at the tombs of the deceased or pilgrimages to reputedly holy sites. Official ecclesiastical sanction for such cultic practices was at first no more than sporadic. In the latter part of that era, however, local ordinaries increasingly undertook to exercise at least a supervisory role in relation to such saintly cults. And in a third phase, the one on which Prudlo focuses in this book, the high medieval quickening of papal centralization led to the growing papal domination of the process of saintly canonization, culminating in the fourteenth century with what almost amounted to papal monopolization of the whole business.  “Almost” because, as Prudlo prudently concedes, that development may not have been “fully completed” until Urban VIII in 1634 definitively reserved to the papacy the prerogative of canonization.

So far, so good. But the plot thickens a bit when the author comes to address his more challenging second area of concern—namely, the process whereby in the late thirteenth and early fourteenth centuries the mendicant champions of their orders’ papally canonized saints came to attribute infallibility to the pope’s canonization decisions. For it is his claim that the accumulating discourse pertaining to infallibility in canonization provided a new vocabulary and a new lexicon with which to carry on development of the infallibility discussion into the Counter-Reformation and beyond. It is true that when the First Vatican Council came finally to define the dogma of papal infallibility it made no mention of infallibility in canonization and focused exclusively on the broader issue of ex cathedra papal doctrinal definitions on matters of faith and morals. But recondite though the canonization-infallibility nexus may be, Prudlo’s findings are directly and significantly pertinent to the ongoing debate about the historical origins of the infallibility dogma and any historians working henceforth in that conflicted field will certainly have to take those findings into account.

In that connection—and although Prudlo is at pains to emphasize that his own specific claims are limited to the matter of infallibility in canonization and do not extend to the issue of infallibility at large—the development of his argument almost inevitably leads him to intersect with debates pertaining to that larger issue. Thus he is led to call into question some of the more general claims about the roots of the infallibility dogma advanced in 1972 by the distinguished medievalist Brian Tierney in his book The Origins of Papal Infallibility: 1150–1350. In that powerfully argued if admittedly controversial work, Tierney made no mention of infallibility in canonization but limited himself to trying to identify the precise historical origins of the dogmatic claim attaching infallibility to ex cathedra papal definitions pertaining to matters of faith and morals. And in that, presumably, he was taking his cue from Vatican I’s own definition of the infallibility dogma, which is equally silent on the canonization issue. But in the teeth of Vatican I’s insistence that in defining the infallibility dogma it was “faithfully adhering to the tradition received from the beginning of the Christian faith,” Tierney, basing himself on the historical evidence, concluded that the doctrine was in fact a late-medieval novelty, originating in the late-thirteenth century among dissident Franciscans and explicitly formulated for the first time by Pietro Olivi (1248–98). He argued, moreover, that the doctrine had been advanced with the goal not of enhancing papal power but of limiting it via the insistence that popes were bound by the inerrant, irreformable teachings of their predecessors. It is not surprising, then, that Pope John XXII (1316–34), no theologian but a canonist of distinction, seeing the insistence on papal infallibility as an infringement upon the pope’s sovereignty, described it as a “pestiferous doctrine” and treated it accordingly as some sort of dangerous novelty.

Having stressed the salience “for decades” of the claim for infallibility in papal canonization and, accordingly, “the long maturation of the infallibility question” across the years from the mid- to late-thirteenth century, Prudlo quite understandably takes exception to Tierney’s argument. In so doing, however, he betrays an unfortunate edge of condescension toward the work of a fine scholar to whom we are all indebted—Prudlo himself, I would wager, not excluded. He rejects Tierney’s interpretation of what Bonaventure and Aquinas had to say on the matter of papal infallibility, and takes particular exception to the remark that “Aquinas’s usual clarity deserted him” when he addressed such matters as the papal teaching authority. But about all of this, given the tangled nature of some of the arguments involved and the ambiguities present in some of the pertinent writings, I am really not so sure. The less so, indeed, since Prudlo somehow manages  to accuse Tierney (incorrectly it turns out) of “entirely omitting” discussion of Aquinas’s Quodlibet IX, qu. 8 (a locus classicus on the topic that I must confess doesn’t strike me as notably clear) on one page, while on the next page denouncing Tierney’s interpretation of that very text as “especially tendentious.” The upshot? I would advise any reader intent upon pursuing this intricate issue to acquaint himself directly with Tierney’s argument rather than relying on what Prudlo claims Tierney said.

One final observation. It concerns the assertion that over the centuries it was to become “the common theological opinion that the pope is infallible when solemnly canonizing saints.”  In fairness, it should be noted that Prudlo may have been intent on hedging or qualifying that claim when he also noted that as of 1965, “no Catholic thinker of stature had denied infallibility to the pope in canonization since the 1600s.” But if that is indeed “the common theological opinion,” our theologians seem of late to have been even more circumspect about mentioning it than the popes themselves have been about exercising their prerogative of infallibility in the century and a half since it was officially defined. And perhaps wisely so, given the micropolitics surrounding the choice of some of the candidates for canonization and given, too, the tricky evidentiary issues that have dogged some of those candidacies. After all, as recently as 2002, Pope John Paul II, in choosing solemnly to canonize Juan Diego of Guadalupe was inserting into the calendar of saints a figure of myth and legend about whose actual existence historians continue to harbor grave doubts.