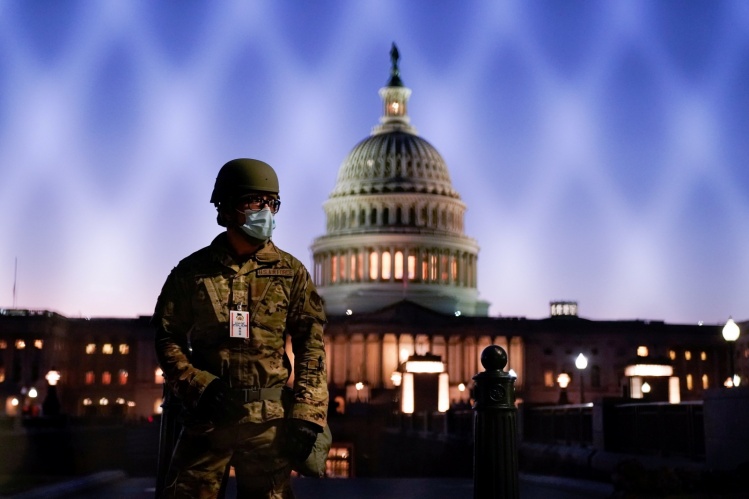 “The United States is strong and big. / When it shakes there is a deep tremor / through the enormous vertebrae of the Andes.” So writes the Nicaraguan poet Rubén Darío in “To Roosevelt,” an ode against imperial hubris. The poem was published in 1903, five years after the United States routed Spain, seized both Cuba and Puerto Rico, and, under Theodore Roosevelt, established itself as the behemoth of the Western Hemisphere. It was the early days of an empire. For Latin America, the aftermath of the Spanish-American War made clear once and for all that U.S. influence would become a fact of life.

And it still is. Anything that happens here in the United States still sends tremors down south. Now, however, what people in Latin America fear is not the strength of a rising power to the north, but what appears to be its decline. “Can you believe this is happening in the United States?” is a question friends and family from Latin America have been asking me for more than four years. They learned about what was happening here in translation, from the sober analyses of foreign correspondents, news blasts on CNN International, hard-to-interpret video clips on WhatsApp, or social-media memes. How could the United States, which had always presented itself as the great political stabilizer of Latin America, itself become so unstable? The empire that has guest starred in the histories of so many Central and South American nations, always butting in in the name of democracy, seemed on the brink of destroying its own democracy.

What I notice now, in the wake of the Capitol riot, are the virtues folded into that smug meme my friend sent me and implicit in the Latin American schadenfreude: humility and resilience. My friend also sent me a picture of the front page of a Paraguayan daily newspaper with the headline “THE REPUBLIC IN FLAMES.” Three years ago in Asunción, a rogue group of legislators seized the parliament, locked the doors, and tried to force an amendment on presidential term limits in the Paraguayan constitution. Protestors reacted to this authoritarian move by storming the parliament and setting it on fire. That was different from what happened in January in Washington D.C. In some ways it was the opposite: the Paraguayan rioters claimed to support the established rules and opposed  those who would have changed them. I interpreted this second message from my friend to mean: what the U.S. is suffering, we have suffered before. No one is exempt. Nothing human is alien to me, or to you, or to the United States. All of the things that have happened down south—fascism, coups, tyranny, torture, insane mass movements—can happen in the United States, too.

The United States has more in common with other American countries than most of its citizens might assume.
sharetweet

In the tense days following the riot in Washington, I heard people here asking the same question my friends and family in Latin America had been asking before: “Can you believe this is happening in the United States?” Perhaps we find it harder to believe than they do. Perhaps people in Guatemala, Mexico, and Brazil can more easily imagine it happening because they’ve seen similar things happen before in their own countries. And the knowledge that such things can happen anywhere confers both humility and resilience.

We should remind ourselves that, despite its superpower status, the United States is just one of many American countries. South of the Río Grande, everyone in the Western Hemisphere is considered an “American.” And the United States has more in common with other American countries than most of its citizens might assume: a legacy of slavery and the persecution of indigenous peoples, the challenge of governing large areas with sprawling populations, high levels of religious belief. These features make us more like our neighbors to the south than like the European countries we’re more used to comparing ourselves to. American countries all bear the imprint of their colonial past: they are works-in-progress, multinational social contracts with a European co-signer.

It is normal for a country to police its borders, but Trump’s border wall has always been a nationalist fantasy disguised as an infrastructure project. It reflected the idea that what goes on south of the border can somehow be safely separated from what happens here. In this view, North America is “advanced,” while Latin American countries are relatively backward, ruled by a dictator, or at risk of revolution, or still “developing.” This idea once had a religious dimension: the north was Protestant (and enlightened), the south Catholic (and superstitious). The truth is that, as an empire, the United States has for a long time been everywhere in Latin America, while Latin America has been everywhere within the United States—not only as a source of cheap labor, but also as part of its cultural heritage.

The idea of a clear-cut cultural frontier between the United States and Latin America has always been dubious. Consider the names of some of the major U.S. cities: Los Angeles, San Francisco, San Diego, Santa Fe, Las Vegas. A large chunk of what is today the United States was Mexico before the Mexican-American War. The culture in this large part of the United States will always be a combined inheritance of the Anglo-American settlers and the indigenous and mestizo who preceded them. The United States also counts more than 3 million Puerto Ricans as U.S. citizens, though they still lack voting representation in the federal government. Culturally and economically, Latin America extends well into the United States.

But the United States has yet to embrace its neighbors to the south, or even to contemplate what such an embrace would entail. Instead, we have seen the Trump administration cruelly mistreat Latin American refugees, separating children from their families. It is telling that, for a few politicians, the Capitol riot occasioned the horrifying thought that “we are becoming like them.” “This is how election results are disputed in a banana republic—not our democratic republic,” as George W. Bush put it. “We are witnessing absolute banana republic crap in the United States Capitol right now,” said Wisconsin Rep. Mike Gallagher. To be fair, I have heard Latin Americans make similar comparisons, though usually without using the neocolonialist term “banana republic.” “Trump is a Latin American politician,” one eminent South American professor told me. The theory that Trump is best understood as a kind of caudillo—a strongman in the Latin American mold—has become a cliché, at least in my experience. North Americans make such comparisons with disgust; Latin Americans, with a mixture of shock and dread. But the real problem is that, until very recently, so many people assumed that the United States was permanently immune to the kind of social and political problems that plague a so-called banana republic.

Perhaps our recent political traumas can teach us some humility—the humility that comes with accepting our place within history (no empire lasts forever) and from accepting that we are, after all, just one of many American nations, and not so different from the rest of them as we once imagined. A year after writing “To Roosevelt,” Darío composed another, more appreciative poem about the United States, “Salutation to the Eagle.” “And from your ethereal heights you contemplate, O divine Eagle / the combative agitation of our living globe.” In the aftermath of the Trump presidency, it may be time for the United States to fly down from those “ethereal heights” and back to earth.