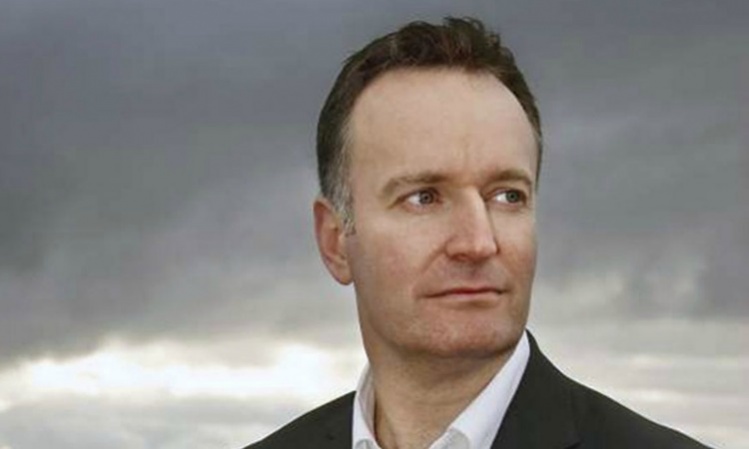 True personality floats beneath surface consciousness, obscured by the fog of dementia—or the fog of war—and to meet what one truly is can either affirm or destroy. This theme works its way ever so deftly through the parallel developments of two characters in Andrew O’Hagan’s latest novel The Illuminations, serving both as an analysis of mental experience and as a structuring principle of the narrative. O’Hagan studies twinned souls and fates separated by two generations and considerable family discord. Anne Quirk resides in a nursing home on the Scottish coast, west of Glasgow, while Luke Campbell, her grandson, soldiers for a Scottish regiment in Afghanistan. Their self-recognitions, both respectively and jointly, shape the climax of the novel’s plot; hence the title, The Illuminations, the name of the grand lighting-up of the English seaside resort of Blackpool.

O’Hagan is a writer of many voices. In prior novels he has impersonated Marilyn Monroe’s dog (in The Life and Opinions of Maf the Dog, and of his Friend Marilyn Monroe), and a pederast priest in Be Near Me, a work that renders the complexities of the priest’s career without exonerating or condemning him. The third-person narrations in The Illuminations offer us a poignant view of the failing Anne, who is portrayed through fragmented speech and in carefully observed gestures and facial movements. O’Hagan takes on our fear of the blank of demented senescence. In Anne we see what a visitor to any loved one in a nursing home witnesses—the pieces of a former whole, the furtive self-glimpses of a mind confused by its own reflection. There is dignity in that faltering consciousness. O’Hagan offers a conditional hope mediated by the memory of a life lived before.

His male protagonist is a soldier, an officer committed to his men if not to his mission. Luke Campbell’s fractured self comes alive in marvelously sustained dialogue, the “slagging” vulgarity that constitutes the verbal shield under which his squad operates amid the ambushes, the haze of marijuana, and the deceits of the Afghan war—and again after the return home, in his fractious exchanges with uncomprehending civilians. The novel alternates its scenes between Lochranza Court, Anne’s nursing home, and a mountain road in Afghanistan where Luke and his men are in convoy on an ostensibly humanitarian mission. The venture ends in massacre and disgrace, including the ignominious fall of Luke’s mentor, Major Scullion, and Luke’s own disillusionment.

What bobs to the surface in the interplay of the novel’s two main characters is Anne’s earlier life as a pioneering woman photographer and Luke’s childhood tutelage at her side. From the get-go he appreciated color—“light on fire”—and with Anne’s encouragement he developed a poet’s view of life, one that addressed “the world not as it was, but as it might be”; his choice of soldiering reflects allegiance to the legacy of his father, killed in action in Northern Ireland decades before. As the plot brings the two characters together, Luke unearths his grandmother’s trove of photographs and a revelation of what broke her happiness and estranged her from her daughter Alice, Luke’s mother. Gradually Luke begins to see as Anne saw, the past reclaimed in the uniqueness of her photographic skill. This reclamation is complicated by what he learns of his Grandfather Harry’s weakness and infidelity.

Eventually Luke helps Anne salvage a few final days of recollection amid familiar surroundings, with the help of Sheila, a gregarious Blackpool landlady who has guarded Anne’s possessions—and secrets—for decades. Through Sheila’s account of Anne’s life thirty years before, Luke finds reaffirmation of what he himself had known as a younger man: the need to live “a life proportionate to his nature.” There is no sentimentality in the recognition of genius left unfulfilled through betrayal and tragedy. Anne might win posthumous fame—her photography is to be exhibited—but she is incapable of living on her own. As a further casualty, Luke’s mother, Alice, has lived estranged from the very kinship she sees between her mother and her son. The concluding scene has Luke watching Anne on the seaside in Blackpool, laughing with Sheila, but at the mercy of the playful winds even as she reaches for the sun.

The Illuminations derives narrative tension from a remarkable contrast between scenes of domestic routine in the nursing home—the Memory Club meetings that provide both a stimulus for Anne’s remembrances and a useful device for exposition—and the battle scenes in Afghanistan. The darker extension of the conflict is the suicide of Major Scullion, whose career moves from idealism to despair, a path Luke chooses not to follow. O’Hagan broaches another theme here, the saving love of literature, poetry in particular, shared by Luke and his mentor, Scullion. The major’s wounds cause him to rally his physical resources; he saves himself from death by singing an old ballad. But all the poetic power of literary tradition cannot shield him from the desolation of failure.

O’Hagan’s rendering of the feel of a nursing home and that of a tawdry club where Luke surrenders to music, sex, and drugs offers a powerful contrast. O’Hagan gets exactly right the feel of Luke rejoined with his demobilized men in tentative drunken intimacy. He also conveys Luke’s complex train of thought as he turns the delicate leaves of Anne’s long-hidden letters and finds the woman who shaped him. Underlying all of Luke’s worries is his fundamental concern for the men he commanded, the nineteen-year-olds who put their fates into his hands, and to whom, in the end, he has little to say. Only in his rediscovery of himself in the person and the artwork of his now-dependent grandmother can he find a life that has “proportion to his gifts.”

O’Hagan is a remarkable storyteller, one who can’t write a bad sentence. In The Illuminations, he uses his gifts to get beneath the surface of two lives estranged from their own past.