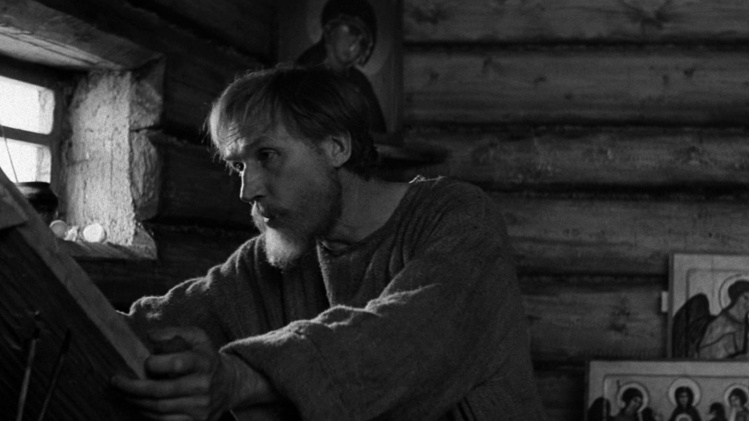 Among the great religious films in cinematic history, from Carl Theodor Dreyer’s The Passion of Joan of Arc (1928) to Xavier Beauvois’s Of Gods and Men (2010), the least known to American audiences is probably Andrei Tarkovsky’s Andrei Rublev. An ambitious epic of Russia set in the early fifteenth century, it is told in a formally experimental series of episodes, in which the great icon painter sometimes figures in the center of the story but just as often lurks in the background. The film was completed in 1966, but its release (except for a single Moscow screening) was initially blocked by censors. A version was also shown at Cannes in 1969, where it won the FIPRESCI prize. Only in 1971 was it widely released in the Soviet Union, with no advertising whatsoever. Wherever it was shown, though, houses were packed.

Listed often among the one hundred greatest motion pictures of all time, a restored version came to deservedly new attention in the United States last year following a brief run at the Film Society of Lincoln Center in New York (albeit to regrettably sparse audiences). The original version was 205 minutes long, but Tarkovsky also signed off on the 186-minute cut shown in New York.

Shot almost entirely in black and white, Andrei Rublev opens with a prologue (dated 1400, entitled “The Balloon”) in which a dreamer named Yefim manages to get a hot-air balloon aloft. Soaring above the landscape, he cries out “I’m flying!” The whimsical tale, a parable of artistic aspiration and creativity, is followed by a first episode (also dated 1400) in which we meet the eponymous title character and two of his fellow monks, Daniil and Kirill. All three are icon painters, and have just left the Andronikov Monastery in Moscow to paint. Seeking shelter from a driving rainstorm (rain symbolizes human affliction throughout the film), they enter a barn where a jester entertains the local townsfolk. The scene, a unique comic interlude in the film, nevertheless levels a searing criticism of the aristocratic boyars, laying bare their indifference to the peasants’ plight. Things don’t end well for the jester, who receives a beating before being carried off to prison by soldiers of the local prince.

In subsequent episodes Tarkovsky introduces us to Theophanes the Greek, a successful icon painter with whom Rublev has a long, strained artistic relationship (1405-06). Following that is a section depicting Rublev’s resistance to painting a “Last Judgment” scene, intercut with a mysterious reenactment of Christ carrying his cross to Calvary (1408). Next comes a prolonged pagan celebration of Midsummer Night, which draws Rublev into voyeuristic observation of nude love-making (1408).

Part Two begins with the local prince’s encampment with his armed entourage (1408). Soon a band of Tatars arrives. Together, with unspeakable violence, the Tatars and Russians sack the city of Vladimir, violating its citizens and desecrating its cathedral. Rublev, who happened to be painting there, is horrified. (He also kills a man to spare a woman—an “idiot fool”—from rape). “Silence,” the sixth episode (1412), finds Rublev back in the Andronikov Monastery. Famine has struck, and he maintains a vow of silence, undertaken as a penance for killing the would-be rapist. He has brought with him the “idiot fool” Durochka (played by Irma Raush, Tarkovsky’s wife at the time). At the monastery he is reunited with Kirill, who confesses his earlier jealousy of Andrei and urges him to make better use of his God-given pictorial talent.

The key to the whole film is Episode 7 (dated from spring 1423 to spring 1424), which tells the story of “The Bell.” It’s a kind of “film-within-the-film” in which a young man, Boriska (Nikolai Burlyayev), persuades the Grand Prince’s representatives that he has learned the secret of bell-casting from his deceased father (though it’s not actually true). Against all odds, he then oversees a grand—and gripping—project to cast a massive bell that at last rings with clarion clarity.

Tarkovsky’s mastery of the medium of film in “Andrei Rublev” is complete—and completely original. He is extraordinarily adept at close-ups and medium shots of characters, rendering them lastingly real to us—there’s the unforgettable Rublev himself, played by Anatoly Solonitsyn (with profound interiority), or the young bell-caster Boriska (Nikolai Burlyayev), who can display fierce energy or the threat of despair equally with the flash of his young eyes. (These shots also remind us of Ingmar Bergman, who considered Tarkovsky the greatest of all directors.) Tarkovsky became especially famous for his “long takes,” which simultaneously dissolve and (paradoxically) deepen time. Tarkovsky often raises his camera dramatically to the sky in shots that encompass whole landscapes—such as the topography that Yefim sees from his balloon, the city of Vladimir and its people suffering from the savage Tatars and traitorous Russians, or the crowds thronging to see Boriska’s great bell. This is indeed the noble tradition of Russian cinema, in which Tarkovsky proves himself a more than worthy successor to Sergei Eisenstein.

Tarkovsky was born on April 4, 1932, on the shores of the Volga River east of Moscow. After various vocational experiments, he enrolled in 1955 at the Gerasimov Institute of Cinematography (VGIK), the major Soviet cinema institute in Moscow. He came to international attention in 1962, with Ivan’s Childhood, a film he was (somewhat surprisingly) chosen to direct after its original director was fired. In the late 1950s, films such as Mikhail Kalatozov’s The Cranes Are Flying and Grigory Chukhray’s Ballad of a Soldier had alerted western audiences to both the sufferings and hopes of ordinary Russians during World War II. Ivan’s Childhood is even more personal (and visionary), focusing on an orphaned boy whose parents were killed during the German invasion. At the time of its release, Tarkovsky said that he wanted to “convey all my hatred of war” and chose childhood because that’s what contrasts most with war.” The film went on to win the Golden Lion at the Venice Film Festival and Best Director at the San Francisco Film Festival.

After the even greater acclaim of Andrei Rublev, and despite a deeply strained relationship with the Soviet film system, Tarkovsky managed to direct three major feature films during the 1970s: Solaris (1972), Mirror (1974), and Stalker (1979). In Solaris, based on a science fiction novel by the Polish writer Stanislav Lem, the psychologist Kris Kelvin leaves Earth for a space station orbiting a planet called Solaris. He discovers that the water on Solaris functions as a kind of medium, bringing out repressed memories and obsessions. (Steven Soderbergh also adapted Lem’s novel in 2002.) Mirror, the most autobiographical of Tarkovsky’s films, centers on a dying poet. He remembers not just important moments from his own life, but also key historical events from the twentieth century, significant for the entire Russian people. (The film includes poems by the director’s father, Arseny Tarkovsky, and a cameo of his mother, Maria Vishnyakova.) In Stalker, shot in Tallinn, Estonia, the eponymous hero is an eccentric guide who leads a writer and a science professor through the ruins of post-war society to a strange site known as the “Zone.” There, they visit a so-called “Room of Desires,” purportedly able to fulfill visitors’ deepest longings.

In an interview after Stalker opened, Tarkovsky said that “in this period of the destruction of faith, what’s important to the Stalker is to light a spark, a belief in the heart of people…. He’s a prophet who believes that humanity will perish for lack of a spiritual life.” Earlier, while working on “Solaris,” he had said that “the dramatic form of my films is a token of my desire to express the struggle and the greatness of the human spirit.” Similar to Vasily Kandinsky’s denunciation of the materialism of modern life, articulated in his famous 1912 essay “On the Spiritual in Art,” Tarkovsky’s artistic philosophy held that Russian artists were entrusted with the “enormous task” of “resurrecting spirituality.”

The task continued as he left Moscow for Italy in 1982 to direct a joint Italian-Soviet production. The film, Nostalghia, was released a year later, telling the story of a Russian writer traveling to Italy for the first time to research the life of an eighteenth century Russian composer. There, he meets a beguiling interpreter named Eugenia, and then a kind of mad saint named Domenico. Accompanying themes of Russian nostalgia and Dostoyevskyan compassion, music plays a major role in the film (Tarkovsky thought it the highest form of art), as do the frescoes of Piero della Francesca.

After announcing in 1984 that he would not return to the Soviet Union (his request for an indefinite stay in Italy had been denied), Tarkovsky traveled to Sweden in 1985 to shoot his final film. Sacrifice (with the great Sven Nykvist as cinematographer) opened in 1986, and is perhaps the artist’s second most clearly religious work. It’s the story of a former actor turned social critic, Alexander, who literally burns down his beautiful house by the sea as an offering, meant to persuade God to avert a nuclear holocaust. Tarkovsky worked on the final editing as he lay dying of lung cancer in a Paris hospital in 1986.

Agreeing reluctantly to an interview after Sacrifice opened, the artist demurred on the question of whether he was a “Christian filmmaker.” Instead (as is often the case with artists), he directed the interviewer to consider the work itself. The purpose of art, Tarkovsky held, was “to prepare the human soul for the perception of good.” If icons in the early fifteenth-century spoke directly of the divine, today art is effectively religious in an allusive, indirect way. With relish Tarkovsky recalled asking his father, when he was very young, “Does God exist—yes or no?” “And he answered me brilliantly: ‘For the unbeliever, no, for the believer, yes!” And yet, in the end Tarkovsky seems to have made up his mind. Toward the conclusion of the same interview, he stated: “Faith is the only thing that can save man, that’s my deepest conviction.”

Reflecting on this great, puzzling man and his aching search to make art capable of reviving the human spirit, I keep coming back to the final sequence of Andrei Rublev. In the final black and white scene, as Rublev breaks his silence to comfort the stricken Boriska, Tarkovsky offers us a Pietà-like image of exquisite compassion, one meant to remain in the viewer’s heart long after the film is over. Scaffolding and pulleys raise the enormous bell (adorned with the image of Saint George), indirectly evoking the raising of Christ’s cross. As the bell begins to toll, the aged artist cradles the exhausted young man, whose audacity has just redeemed Rublev’s faith in his own art. “We will go to Moscow, to the Cathedral of the Holy Trinity,” he declares. “You will cast bells. I will paint icons.” Just as the scene (shot, like the entire film up to this point, in black and white) ends, the screen explodes into vibrant color for a ten-minute closing sequence. Tarkovsky’s camera pans across Rublev’s paintings, lingering especially on the famous icon of “The Holy Trinity.” The reverential tone of these slow shots is heightened by a soaring orchestral accompaniment by Vyacheslav Ovchinnikov, Tarkovsky’s regular composer.

By film’s end, fifteenth-century Russia—savage, oppressive and famine-stricken, but Christian to its core—has been joined with heaven itself. It’s an ecstatic finale—and the emblem of a searching spirituality woven into Tarkovksy’s work throughout the last two decades of his life.