How to Worry about Selfie Sticks 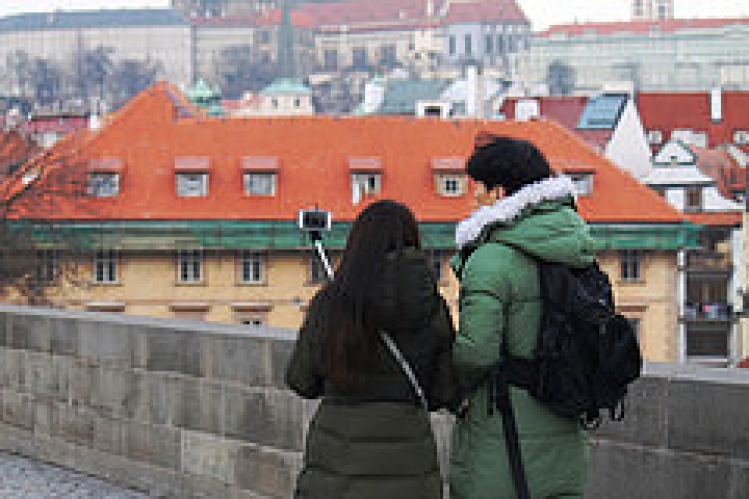 There is a passage by Iris Murdoch from The Sovereignty of Good where she describes joy in teaching herself the Russian language. “Attention is rewarded by a knowledge of reality,” she writes. “Love of Russian leads me away from myself towards something alien to me, something which my consciousness cannot take over, swallow up, deny or make unreal.” Because the rules of Russian grammar are difficult to master, learning the language pushes Murdoch’s full attention into a humble posture. She’s describing devotional attention, in other words, and its devotional character is what’s most true about it because it makes one’s body and mind confront something you’re not meant to just use, but see.

Matthew Crawford uses Murdoch’s lines in both his books, Shopclass as Soul Craft, and his latest The World Beyond Your Head (reviewed here in Commonweal) where he takes up the issue of “distraction.” His broader argument hinges on this idea that how we train—or don’t train—our focus, even more than what we set it on, shapes whether or not we become the kind of people who can make free and meaningful choices. It’s a philosophical stab at a moral, social, and economic problem: How can we be more than consumers, but free individuals? We can’t, really, if we hand over our focus to whoever and whatever wants it.

Attention, reality, consumerism—worrying about these things now means thinking about digital technology, especially since a lot of us carry a small machine seductively designed for infinite distraction in our pocket. Rand Richards Cooper recently wrote on how Smartphones allow us to check out from where we’re standing. He writes, “Technology is a majestic human story, and the benefits we’ve gotten from farming out our tasks to machines are incalculable. But what happens when what we’re farming out is consciousness itself—the ability to be ourselves, with ourselves, amid the glories of creation?”

Indeed, where can we begin? I was sitting with a group at a bar after work this week when the conversation drifted to iPhone apps. The crew’s ages ranged from early twenties to late thirties, and we had different levels of comfort with certain popular apps. No, even more—we had varying levels of comfort with the idea of certain apps. While I have an ambivalent relationship to the devices and habits I already have, assuming I have a handle on them, some newer ones make me squint my eyes, suspect they’re a pernicious waste of time, and stop listening. I, a “Millennial”, still have to restrain myself from muttering about “young people” and their selfie sticks. Which are bad (the selfie sticks, not the young people). Can we all agree that they’re bad? Yet it's useless to make an argument about that unless we have an accompanying, compelling recommendation for how public space should look, and why. And we can’t be anywhere else but a world where this argument is necessary.

Social critiques negotiating technology matter and we need more of them, not less. But as soon as that critique compels me to start reaching for an overarching categorization for a lack of virtue that applies to them (“narcissism” is a popular one), I’ve likely stumbled into an area where I can only dig in my heels and become unhelpful. That move would be a little too comfortable, and I can be sure I'm missing the point. If we’re going to grapple with the subject of our attention (and other people’s attention) amid technology, a place to start would be to admit that “technology” doesn’t exist like a bench or an iPhone or even a text message exists. As a piece by Jacob Silverman in The Baffler says, borrowing a line from Rachel Law, "The Internet Doesn’t Exist." Silverman puts an even finer point on it:

“The more we write about what takes place online as if it occurred in some other world the more we fail to relate this communication system, and everything that happens through it, to the society around us. To understand the Internet, we have to destroy it as an idea.”

I take this, in practice, to recommend harder thinking. We need to apply the attentive consciousness digital technology is supposedly robbing us of to these technological developments themselves in the routines of those who use it, which is almost everyone in different degrees.

How can we live in full attention outside digital technology if we cannot attend fully to the concrete stuff of digital technology? Socially, digital technology comes in the form of physical habits in specific bodies in real space. To think about the technology itself, we can begin from any angle that knows it breaks down to 0s and 1s, asking questions like: how are algorithms channeling our attention in ways that serve specific corporate interests?

The task ahead for anyone else concerned about how humans can be fully human will be one of devoted attention to the mechanics of those lives they are given to love. The "internet", "digital technology", or "millennials" are all terms too abstract to provide traction for this work. This means breaking these ideas into parts and learning them as something other than us. In our own bad habits, like one I have where I sleep very near my phone because it’s also my alarm clock, it means having enough respect for a device’s influence to freely set limits on it.

As Katherine Schmidt notes in responding to Rand, critiques of technology are often hidden critiques of youth culture from those outside it. So if paying attention to this means reckoning with youth culture, so much the better for our edification to have to listen seriously to something new. We can figure it out the way Iris Murdoch learned Russian.

A Visit to The Museum of Feelings