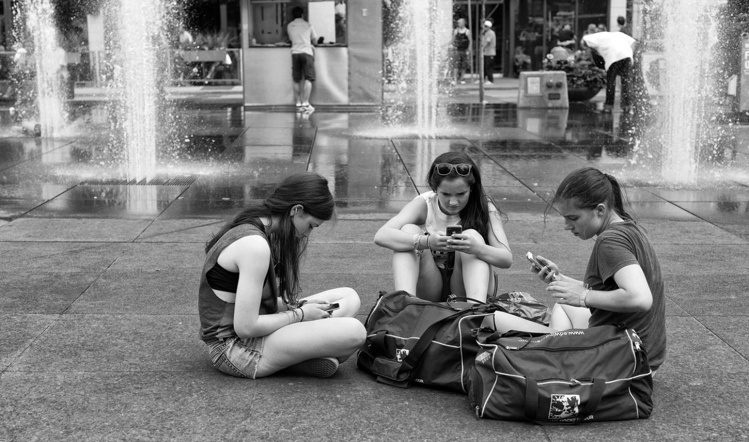 A recent article in the Washington Post profiled a photographer with the pleasingly gangsterish name of Babycakes Romero, who photographed couples and friends in public places immersed in their separate handheld devices—together, but alone. Romero’s project, “The Death of Conversation,” was cued by his frustration at how “smartphones are becoming a barrier to communication in person.” He describes feeling dissed when someone he’s talking with checks a smartphone—“it is a form of rejection,” he comments. Our digital devices, he says, “basically allow people to withdraw rather than engage.”

You go, Babycakes! I feel that way constantly. It’s strange. I consider myself a middle-of-the-road guy in most ways, but when it comes to cellphones I’m the proverbial voice shouting in the wilderness. Now, I’m no techno-Luddite by any reasonable definition. I gladly use On Demand; at my desk I download songs and go online to pursue some useful bit of knowledge or play a game of chess. I’m connected, in other words. Yet the universal desire to be connected everywhere and all the time leaves me baffled.

My main gripe, like Romero’s, is that smartphones damage conversation. Vacationing with friends on Cape Cod a couple of summers ago I was the only phone-free person, and felt awkwardly out of sync. Picture four Red Sox fans sitting in a living room watching baseball, and three of them busy with their handhelds—checking in with work, texting, chasing down Red Sox trivia.

They weren’t quite entirely there.

But that’s America these days: people everywhere with their heads bent, fingertips flicking at their screens. Couples in restaurants, silently flicking. A schoolbus full of teenagers, heads bent as if in prayer. Flick, flick, flick, it never ends. At a political forum I saw our mayor here in Hartford, Connecticut, Pedro Segarra, sitting in the audience, and noticed how frequently he consulted the iPhone in his lap. I get that: you’re mayor of an American city; someone always wants a piece of you, and you have to give it up. But who, other than a politician, would want that kind of life?

Most people, apparently. We now are all mayors, ruling over our virtual municipalities—compulsively checking in, checking back, giving up pieces of ourselves. We worry something might be happening without us. But what, and where?

Meanwhile, our here is disappearing. And not just our conversations. The other day I was driving across town on an errand. As I drove I found myself musing over a parenting book I’ve been reading. Nothing earth-shattering was going on, just one of those little daily interludes where you perform an unconscious activity—in this case, driving—while working out some thoughts in your mind. I stopped at a light, and when it went green the car in front of me failed to move...and I recognized, with annoyance, just how often these days you have to give that little “Stop Texting and Drive” beep to jostle a driver from his smartphone.

A bit later I passed a guy walking his dog. This was a blustery November day, dramatic sky, swirling colorful leaves—the perfect day for walking your dog and taking in nature’s theatrics while letting your thoughts roam. But what was this particular dog-walker doing? The same thing every dog-walker does now. Flick, flick.

These idle moments when we used to be alone with our thoughts—they’re being decimated. A casual but crucial meditative dimension in our lives is disappearing; soon there will be almost no lull, just a ceaseless stream of input. Occupied nonstop with taking things in, we’ll have no time or place to mull things over. Eventually we’ll lose the ability.

Technology is a majestic human story, and the benefits we’ve gotten from farming out our tasks to machines are incalculable. But what happens when what we’re farming out is consciousness itself—the ability to be ourselves, with ourselves, amid the glories of creation? Our portable digital guides have brought us to a strange and futile pass in human relations: when we’re with others, we want to be alone; and when we’re alone, we crave connection. We are constantly bailing out—escape artists, using digital wizardry to gratify our urgent need to be elsewhere.

I know that my friends tire of my diatribes on this subject. But why worship a technology that enslaves us to its near-constant use while diminishing our capacity to be together with our friends and alone with ourselves? Why does everyone think this is such a great idea? I honestly, honestly don’t get it.