How We Got the Good Book 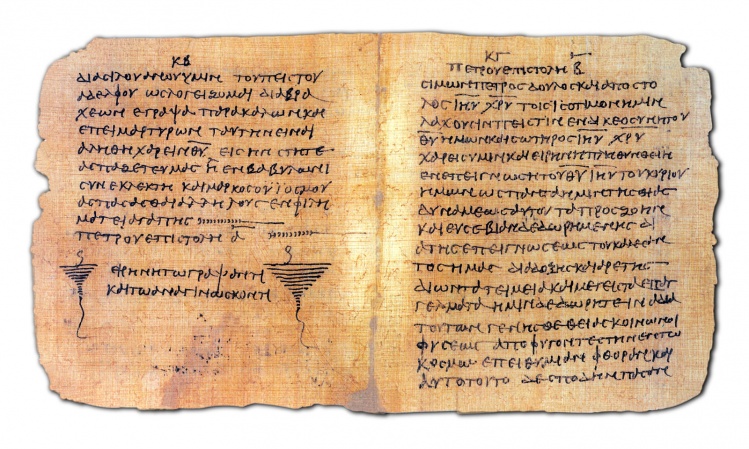 Only two biblical topics reliably receive attention in the mainstream media: new versions of “the historical Jesus,” and the discovery of ancient manuscripts by archaeologists. When these two topics converge, headlines trumpet the event and interviews ensue, followed by claims and counterclaims from opposing camps of scholars, as for a frenzied few moments the press bestirs itself from its customary lethargy concerning religion (apart from scandal and Vatican politics). The post–World War II era saw the shock created by the discovery of the Gnostic writings at Nag Hammadi in 1945 and the Jewish library at Qumran in 1947. More recent instances include the 1996 claim by Carsten Thiede and Matthew D’Ancona to have uncovered a mid-first-century version of the Gospel of Matthew, and the publication of the Gospel of Judas, which earned headlines in 2006.

Such excitement is understandable. In a field notoriously weak in hard facts, archaeology has scientific credibility; dealing with real things and evidence, rather than mere opinions, it is to biblical studies what DNA analysis is to forensic science. The material remains of Christianity, moreover—this most literary of religious movements—tend to be manuscripts, precious artifacts dug out of the desert sands that have preserved them for nearly two millennia. Even for Americans whose attachment to Christianity is tenuous and whose knowledge of the Bible is nugatory, the announcement of new evidence about Jesus or the Gospels can divert conversation, at least for a moment, from fantasy football or the latest Kardashian meltdown.

Brent Nongbri, an Australian scholar and author of many technical studies on ancient Christian manuscripts, now provides a more popularly accessible overview of “God’s Library.” Building on work done by Larry Hurtado and Roger Bagnall, he sets out to demystify the “discovery” of ancient writings, advancing a more sober and realistic framework for assessing the breathless claims and counterclaims that appear in the media. Nongbri’s instincts run toward a highly responsible form of debunking. He wants to show, from a careful analysis of specific finds, that actual field archaeology has had little to do with many of the “discoveries,” and that the provenance of many important collections is murky at best. He also seeks to show that while we can know a great deal about the actual artifacts now in our possession, we do not, in fact, have the sort of knowledge that is supposed to support academic and popular claims concerning them.

In his introduction, Nongbri identifies two tendencies that he seeks to counter. The first is press hysteria, a phenomenon he shows is anything but new. When the American businessman Charles Freer purchased four ancient manuscripts from an antiquities dealer in Egypt in 1906—a Greek manuscript with portions of Deuteronomy and Joshua, another containing the Psalms, a third with Paul’s letters, and a fourth with all four gospels—the find touched off such headlines as “Biblical Errors to be Corrected by Newly Found Manuscripts,” and “New Verse is Added to the Gospel of Mark.” The New York Times ran a banner headline, “Old Greek Bible Reveals Verses Lost for Centuries.” As God’s Library demonstrates, the actual details of the “discovery” had deliberately been obfuscated, and even today remain considerably in doubt.

Nongbri also seeks to correct the tendency to use ancient manuscripts for ideological purposes, especially through claims relating to the dating of those manuscripts. Critics of traditional Christianity like to champion the antiquity of apocryphal writings as a way of challenging the historical primacy of canonical compositions. Defenders of the canon also use manuscript dating in their arguments; Nongbri cites my own introduction to the New Testament, where I argue that a papyrus fragment of John dated to the early second century makes a late second-century composition of that Gospel impossible. Both sides tend to display a confidence in their position, Nongbri says, that is unwarranted by the available evidence.

His final chapter, “Fabricating a Second-Century Codex of the Four Gospels,” shows these two tendencies at their worst, examining the 1996 kerfuffle caused by the claims of Thiede and D’Ancona to have discovered a first-century version of Matthew’s Gospel—a claim abetted by the self-aggrandizing posturing of well-known scholars and inflated by precipitous publication and publicity. In Nongbri’s view, “the main point to take away from this episode is that the first step toward the production of reliable knowledge about these early Christian manuscripts is to be honest about what we do not know” (original italics).

As a start toward a better basis for knowledge, Nongbri provides in his opening chapters a chastening overview that will be especially valuable for those approaching the subject cold. “The Early Christian Book” leads the reader through the basics of ancient manuscript production: the materials used; the process of writing by hand; the details of binding and covering (which sometimes used other manuscript fragments as filler for the covers of a codex). It all serves as a reminder that even in the best cases, scholars are faced with daunting tasks of identification and decipherment. “The Dating Game” walks the reader through the means of placing a manuscript chronologically, including handwriting analysis (paleography), ink analysis, and radiocarbon analysis. The latter two methods are scientific, but provide only a broad chronological framework, while paleography is not an exact science even in the hands of the best practitioners, as widely divergent “expert” pronouncements on specific manuscripts make clear. This dating game, like the real-life version, has as many misses as hits.

The chapter titled “Finding Early Christian Books in Egypt” is equally instructive, showing how little genuine archaeological science—and how much entrepreneurship by antiquities dealers—has figured in the various manuscript “discoveries.” Dealers, in fact, have been the source of most major collections of texts, and they have a well-documented interest in obscuring the sites and circumstances of their acquisitions. “The main thing to be learned from this overview,” Nongbri concludes, “is that reliable knowledge about discoveries of early Christian books is extremely difficult to come by.” Buyer beware, in other words—and scholar, too.

Having warned about the ambiguous role of archaeology in manuscript acquisition, Nongbri turns in the second part of his book to the archival evidence concerning three of the great caches of ancient Christian writings. He begins with the Chester Beatty collection, consisting of a large number of biblical manuscripts acquired in 1930. Nongbri recounts the process of acquisition, highlighting the difficulty in reconstructing the exact circumstances of the discovery, and provides a complete catalogue and analysis of the manuscripts. He follows the same procedure with the “elusive collection” called the Bodmer Papyri, the bulk of which appeared in the library of the Swiss collector Martin Bodmer in the 1950s—once more, without a clear or convincing account of their actual finding. Pulling together manuscripts from diverse collections and grouping them as “Bodmer Papyri,” Nongbri lists them with their contents, styles of writing, and probable range of dating.

In contrast to the Beatty and Bodmer collections, whose origins are archaeologically uncertified, the manuscripts deriving from Oxyrhynchus come from a genuine archaeological exploration, led by the redoubtable British scholars Bernard Grenfell and Arthur Hunt, who in 1896 struck gold while digging in a town dump in Egypt. So vast is the number of manuscripts they found—perhaps half a million, spanning centuries and languages, only a small portion of them Christian—that their publication, begun in 1898, had reached seventy-seven volumes by 2011. Nongbri provides a helpful catalogue of all the Christian writings identified to date.

Overall, Nongbri suggests, there is every reason to think that more manuscript evidence will emerge in the coming years, not only from new archaeological digs but also from a reexamination, through “museum archaeology,” of holdings already hidden away in libraries. Meanwhile, for those wanting to know something of the material basis for the world’s most published (and possibly, read) book, Nongbri’s own book is a gift. It illustrates how good scientific method, patiently applied, can yield significant results even in an area that is maddeningly obscure. And almost as helpful as its illustrations, maps, and catalogues is its frank admission of the all-too-human motives and machinations that so often lie behind the sensational headlines.

The Myth, the Monk, the Man