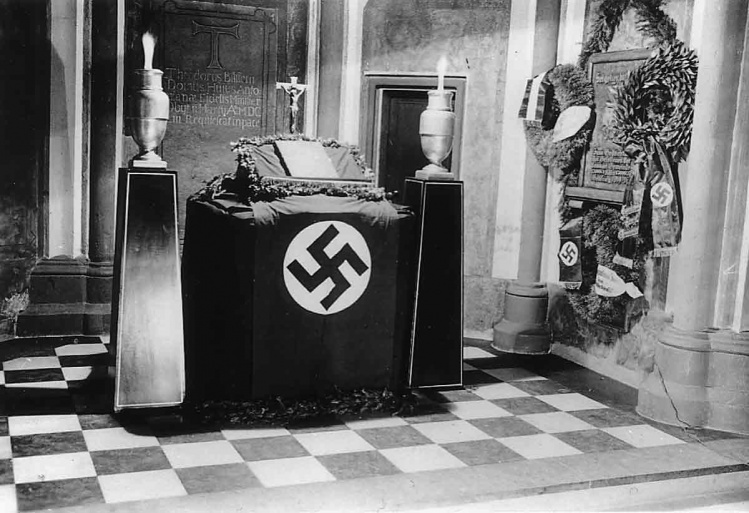 Side altar at the Antoniter church, 1935

The greatest obstacle for Christian anti-Semites has always been Christ’s Jewishness. Or so it would have seemed. As Susannah Hesch­el shows in her unsettling new book, Protestant theologians in Nazi Germany worked hard in a well-organized effort to deny that Christ was Jewish. Heschel’s archival journey takes her back to 1939 and the founding of a theological research institute with the frank name, Institute for the Study and Eradication of Jewish Influence on German Church Life (Institut zur Erforschung und Beseitigung des jüdischen Einflusses auf das deutsche kirchliche Leben). Located in Eisenach—the city where Luther once translated the Bible—the institute published treatises arguing not only that Christ descended from non-Semitic stock, but that his entire mission had been directed against the Jewish people. Christ, in effect, was an ur-anti-Semite. Like many terrible ideas espoused in Nazi Germany, this was not entirely new; the nineteenth-century philosopher Ernest Renan (author of the influential and demythologizing Life of Jesus), for instance, had argued that Jesus stood against the Jewish people. Yet in the Third Reich this old view, now merged with other ideas and agendas, gained a political, scientific, and theological potency that indeed was new.

Who were these Christians who flourished under Nazism? What can explain their obsession? Heschel identifies a toxic mix of religion and politics, along with important churchmen who drank deeply of it. Her lead figure is the director of the institute at Eisenach, Walter Grundmann (1906–76), an early Nazi Party member and a theologian who had studied with Germany’s leading figures. Grundmann advanced rapidly after the Nazi seizure of power in 1933, becoming a seminal figure in the effort to de-Judaize Christianity and marry the faith to Nazism. Other figures at the institute similarly combined theological and political credentials; some were even bishops. These Nazified Christians—the so-called German Christians—vied for influence in German Protestantism with liberal figures like Martin Niemoeller and Dietrich Bonhoeffer.

Some readers may find Heschel harsh when she writes that these more liberal “Confessing Church” Christians, some of whom risked their lives opposing Nazism, were “just as sympathetic to anti-Semitism” as members of the Eisenach Institute, who strove to please the Nazis. But she is certainly right that historians have overdone the distinction between “religious” and “secular” anti-Semitism in Germany. As Heschel notes, both branches of German Protestantism shared “assumptions about the evils of Jewishness.” Distinctions were of degree rather than of kind: Bonhoeffer’s followers would have opposed Germany’s “ridding” itself of Jews by sending them to death camps, yet supported the idea that German Jews had to give up their Jewishness through baptism; they shared the view that Jews as Jews were intolerable.

Such assumptions made the Holocaust possible. So too did the belief, widespread among Christians, in deicide: the notion that Jews lived under a historic “curse” for killing Christ. Sobering evidence of the pervasiveness of this belief among Catholics comes in the 1938 draft written by John LaFarge for the “hidden encyclical” against racism, commissioned by Pius XI, but never released. LaFarge, a lifelong opponent of racism and much-loved preacher in his time, saw the Jews as “this unhappy people, destroyers of their own nation, whose misguided leaders had called down upon their own heads a divine malediction, doomed, as it were, to perpetually wander over the face of the earth.” Such utterances make clear that Christian belief did not permit a compelling refutation of anti-Semitism precisely because anti-Semitism itself was seen as one more trial sent to the Jews.

The Aryan Jesus assesses Christian anti-Semitism of this period as an intellectual formation, an ideology that shaped the views of people as different as Grundmann and Bonhoeffer. Nazism launched a crisis of conscience among Protestants like Bonhoeffer and Karl Barth, or the Catholic Karl Thieme, the later theological director of the Freiburger Rundbriefe. Their eventual break from anti-Semitism was propelled by years of internal conflict and a growing sense that ideology kept them from realizing the larger good they desired. Heschel reveals how their search for a way out of the immorality of anti-Semitic ideology led them deeper into Scripture, especially to a rediscovery of Paul’s letter to the Romans, with its talk of God’s unceasing love for the Jewish people.

By contrast, when the “German Christians” got to work de-Judaizing Christianity, they found Scripture so full of positive references to Judaism that they had to rewrite it. In 1940 Grundmann and his associates published their own, bowdlerized version of the Bible, called The Message of God (Die Botschaft Gottes). Missing from it were the Old Testament, John’s Gospel, and all references to Jesus as servant or lamb of God. The institute argued that supposedly original understandings of Christ as warrior had predominated “in a lost original Gospel whose message had been distorted.” Thus the Sermon on the Mount appeared, but with no blessing for the merciful. In the hands of Grundmann and his colleagues, Christian teaching was warped to fit Nazi obsessions: the need to meet hatred with hatred; the virtues of manliness; and above all, the dark powers of the Jews to subvert the German people. Where Paul was a solution for anti-Nazis, as a Jew he was a problem for Christian racists, who argued that he “distorted” an originally Hellenic Christianity. In 1942 Grundmann proclaimed that “a German faith cannot be based upon Paul, because it would be deformed by his Jewish system of coordinates.” Two years later a Thuringian pastor called for removing Paul altogether in order to focus faith upon Jesus, who had gone to death “in battle against Judaism.” The hierarchy rejected these calls—fearing that such radical revisions would bolster the arguments of those who said that German Christians were not really Christian—and postponed them until some future time after the war had been won.

As we know, Germany lost the war, and Paul, instead of disappearing, grew in prominence. As for Grundmann, readers will doubtless assume that his career and others like it must have ended with his patrons’ annihilation in 1945. Yet a trip to my university library discloses no fewer than twenty-four titles appearing under the authorship of “Walter Grundmann,” with three-fourths of them published after 1945. And (another surprise) the great majority of his works appeared not in West Germany, the supposed haven for former Nazis, but in the German Democratic Republic, a nation created by antifascist Communists and Social Democrats.

How did this happen? Who would want to read or even publish an old Nazi anti-Semite? Heschel sheds light on the cursory nature of the attention paid to Nazi sympathies and commitments after the war’s end. Like many others, Grundmann was quickly “de-Nazified,” thanks in his case to recommendations by anti-Nazi Protestants more concerned with institutional coherence than with anti-Semitism. In fact, the charge was never raised against Grundmann, even as he rose to high positions in the East German Protestant Church. Like the church’s own anti-Semitism, this aspect of his past became invisible.

Is there a key to understanding the chameleon Grundmann, able to move seamlessly from Hitler to Marx? Perhaps while Karl Barth was reading chapter 11 of Paul’s letter to the Romans, with its message of salvation for all God’s people, Grundmann was reading chapter 13, and thereby following in a long tradition of Lutheran subservience to the “authorities.” What’s clear is that loyalty that had led him to support the SS in 1934 now benefited the East German secret police, the Stasi, which Grundmann served so obsequiously that his reports were read with caution by Stasi officers who judged him (in Heschel’s words) a “typical academic: desperate for admiration and with an inclination to intrigue.”

Despite such obsequiousness, or more likely because of it, Grundmann’s career flourished under Communists just as it had under the Nazis, and in time he was accorded the highest privilege given to Germans living behind the Wall: the right to travel to the West. Presumably he had friends to visit there, since other institute members who had settled in the West after de-Nazification did equally well, advancing to professorships and control of important churches. Several even received high state honors. Like Grundmann, they now claimed that they had actually opposed the Nazi regime, thus hiding behind, and helping to enlarge, a self-serving fiction—that this “spiritual bulwark of faith,” as Heschel puts it, “had kept Christians from submitting to Nazism.”

The Aryan Jesus lays bare a widespread collusion of Christians in postwar East and West Germany to carry on as if nothing had happened, beating back nagging questions with a “discourse” of the supposed incompatibility of the church and the Nazi regime. Heschel dissolves every element of this narrative. Crimes were committed not despite religious belief, but because of it. Christians were racists; Nazis became Communists; and anti-Semitism continued after the Holocaust, with the old perpetrators training generations of students and pastors for careers under democracy and dictatorship alike. In the book’s final pages, Heschel strikes a more optimistic note, recognizing the efforts of some younger theologians to deal with a tragic legacy. But her overall tone is one of instructive vigilance. No force in Germany was sufficient to root out the evil of the past; indeed, hardly anyone cared to recognize its existence.

This is not a book about Protestantism, but about Christianity. German Catholicism likewise has dark chapters in its past; Karl Adam, Alois Hudal, Wilhelm Schmidt, and others all continued their work into the postwar years without rupture, a continuity we know a great deal about, thanks to the efforts of such historians as Hermann Greive, Georg Denzler, Lucia Scherzberger, and Dagmar Pöpping. And while there was no bowdlerizing of the Bible in Catholicism, there was racism, and an insistence that God could not love Jews as Jews. The authors of the recent U.S. bishops’ “Note on Ambiguities Contained in Reflections on Covenant and Mission” would do well to take Susannah Heschel’s book in hand when wondering why Jews react forcefully to invitations to baptism (especially the “most subtle” kinds). History teaches few clear lessons, but one is this: attempts to eradicate Jewishness ultimately target Jewish men, women, and children; as the Vatican II statement on the Jews, Nostra aetate, made clear, there is no Judaism without the Jewish people.