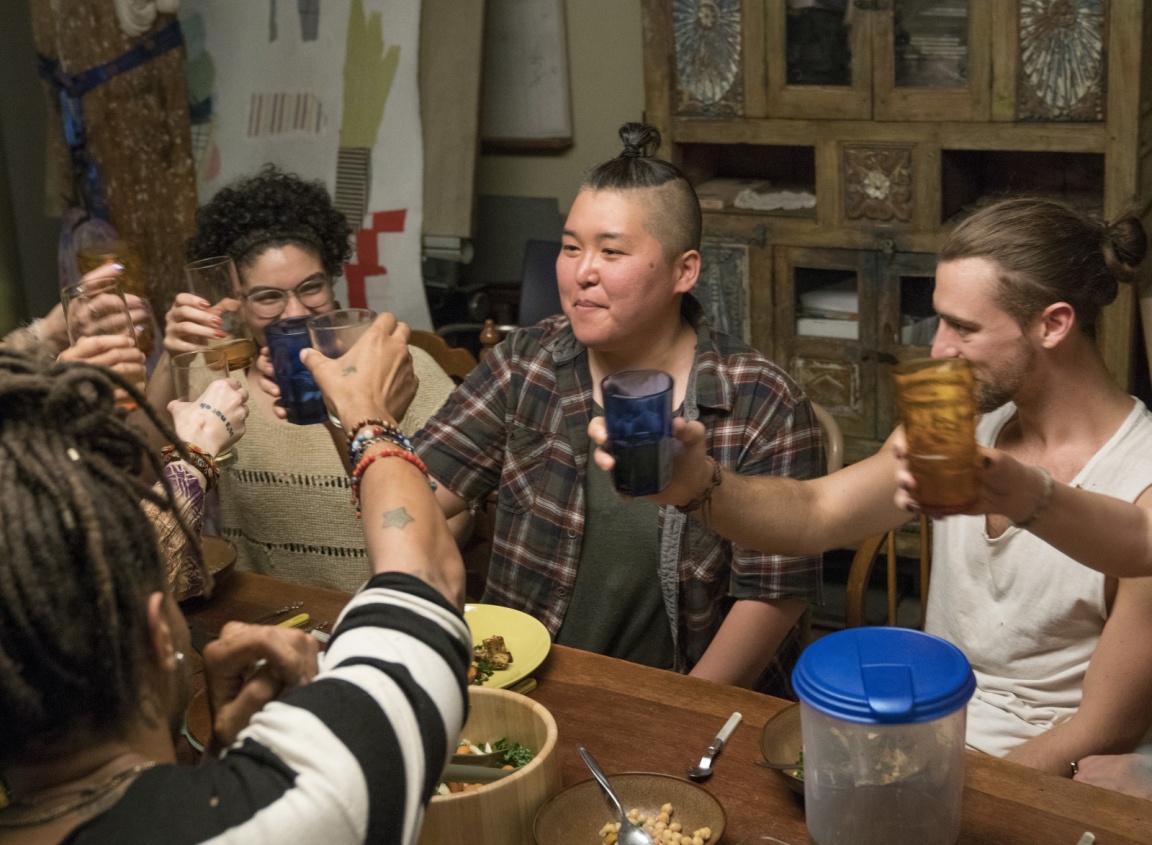 A still from ‘High Maintenance,’ courtesy of HBO

Things (and people) are interesting. That’s the simple and surprising thesis of High Maintenance, the loosely structured anthology series that just concluded its second season on HBO last month. The show chronicles the exploits of a Brooklyn pot dealer, a mellow, bearded thirty-something known only as The Guy, as he bikes around the city delivering weed to a never-ending, ever-changing stream of clients. Sometimes appearing on screen for only a few moments, he’s the thread that links the show’s otherwise disconnected episodes, stand-alone stories that each focus on a different set of characters. It’s an ingenious mechanism that enables co-creators Katja Blichfeld and Ben Sinclair (who also plays The Guy) to paint an inviting, immersive portrait of New York City — one that encourages us to slow down and pay closer attention to the rich, often hilarious texture of everyday life.

Critics have long admired High Maintenance for its singular blend of hipness, realism, and humanity. It began as a web-only series on Vimeo in 2012, with short episodes shot on a budget of just one thousand dollars apiece. Gradually attracting a cult following, the series made the jump to HBO in 2016, and has since been renewed for a third season. It’s uproariously funny, but unlike other stoner comedies, High Maintenance exhibits a seriousness of artistic purpose that makes it as thought provoking as it is entertaining. The writing consistently demonstrates the same detailed characterization, dramatic intrigue, and creative plot twists of literary short stories and graphic novels, while the energetic cinematography recalls great moments in the history of documentary film — roving tracking shots of Brooklyn neighborhoods evoke the “city symphonies” of the 1920s (silent avant-garde films, like Dziga Vertov’s Man with a Movie Camera, that aimed to capture the frenetic rhythms of urban life), while intimate interior shots bring to mind the candor and warmth of 1960s cinema verite. It’s also a remarkably diverse show, featuring a broad cross-section of New Yorkers, who each turn to The Guy (whose flannel shirts, fixed-gear bike, and designer helmet epitomize Brooklyn coolness) for a sympathetic ear as they grapple with a variety of problems, some silly, some sad.

This last point especially has led critics to argue that the show’s power lies in its compassionate, nonjudgmental depiction of its all-too-human characters. To a certain extent, that’s true. The Guy’s easygoing, egalitarian vibe enables him to forge instant connections with his customers, becoming all things to all people as he looks past their idiosyncratic weaknesses, anxieties, and eccentricities. Characters as varied as a cross-dressing stay-at-home dad, a lonely agoraphobe living with his mother, and a distraught comedian regularly receive The Guy’s unconditional moral support (which often comes in the form of hugs, encouraging advice, and complimentary pot-laced edibles). Occasionally, The Guy also pitches in with housework, taking out the trash for a pair of neurotic parents, and even responds to medical emergencies, rushing to buy ice cream to save a stranger from diabetic shock.

Characters as varied as a cross-dressing stay-at-home dad, a lonely agoraphobe living with his mother, and a distraught comedian regularly receive The Guy’s unconditional moral support
sharetweet

But such a focus on the accepting, empathetic nature of The Guy obscures the fact that High Maintenance does indeed pass judgment on a certain class of characters: self-centered people oblivious to the negative effects of their thoughtlessness on others. The show reserves harsh treatment for cynical figures like Lainey and Max, two codependent twenty-somethings who spend an evening bashing an absent artist, or the neglectful, career-driven owner of a dog named Gatsby. Other episodes document the obnoxious superficiality of Anja, an aspiring journalist who is obsessed with social media and shamelessly exploits her contacts for scoops. All of these characters violate the deep ethical imperative that lies at the heart of the show: the moral obligation to look past oneself in order to forge meaningful connections with others. As David Foster Wallace once reminded a group of graduating seniors at Kenyon in 2005, the false notion that each of us constitutes the center of the world is “our default setting, hard-wired into our boards at birth.” It’s a lazy tendency that High Maintenance insists we not indulge, instead urging us to go out and build community.

The show’s most recent season, which pointedly addresses the spiritual maladies of division and loneliness, drives this home. It offers an insightful response to the moral challenges of the Trump era, with its nearly daily examples of egoism and discord, by shifting our attention to the communal structures that offer us connection and support. The first episode of the season, in fact, opens in the aftermath of an unnamed disaster that shocks the city into unity, while the final episode closes with a shared viewing of the 2017 solar eclipse, both events that stress collective experience over individual alienation. In between, we observe the range of forms community can take, such as a gathering of feminists preparing for the Women’s March, a support group for ex-Hasidic Jews, and an eclectic housing cooperative. One touching scene, emblematic of the entire series, depicts a group of weary strangers seated in a subway car late at night. At first indifferent to each other’s presence, they are suddenly drawn into fellowship as a playful child begins an impromptu game with a balloon, suggesting that community can unexpectedly spring to life even in the most mundane, ordinary settings. 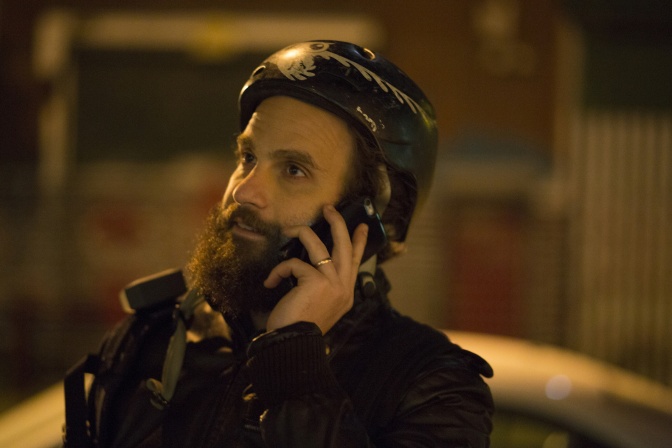 While High Maintenance remains optimistic about our capacity to live together, it also attests to the real difficulty of overcoming the pain of loneliness. It’s a truth the show’s co-creators know well from personal experience — formerly married, Sinclair and Blichfeld divorced in late 2016, a development they unflinchingly write directly into the second season. Here for the first time, The Guy himself becomes the focus of several episodes, shedding his idealized, anything-goes image and displaying the same vulnerabilities and neuroses as his clients. He also suffers pain. In Episode 5, titled “Scromple” (The Guy’s nickname) he is injured in a bike crash and confined to a bed in a crowded emergency room with no one to care for him. His physical distress is mirrored by the emotional affliction of his ex-wife Julia, a photographer struggling to kick her weed habit and build a relationship with a new partner. Though Julia and The Guy come together for a moving moment of hazy communion in the hospital, the majority of the episode details their individual struggles with the lonely, nostalgic ache that hangs over from their divorce.

What keeps this storyline from becoming myopic or sentimental is the way such solitude is set within broader forms of belonging. “Scromple” implies that relationships alone do not ensure happiness — full flourishing also requires membership in a concrete community, whose absence can be a hidden source of pain and confusion. Early in the episode, we discover that Julia was raised Catholic and attended Catholic school, though she stopped praying and attending Mass long ago. Yet as she witnesses an unconventional church service in a Brooklyn congregation, where she has volunteered to curate the group’s website and social media, she momentarily emerges from her sadness and begins to cheer up. Noticing the clear-eyed happiness of the worshippers and inspired by the young female pastor’s dynamic preaching (the sermon invites listeners to praise both “the miracle and the mess” of their lives), Julia snaps beautiful photos of faces, hands, and children’s art — images of the togetherness she longs for. She then lingers at the post-service coffee hour, where her clouds of depression momentarily break. Seeing now becomes an act of liberation and a first step towards healing, as she finally lowers her camera and enters into conversation with the community.

Of course, one could argue that the regular use of a drug like marijuana itself constitutes an act of withdrawal from community, making High Maintenance part and parcel of the self-absorption it sets out to critique. As some drinkers use alcohol to self-medicate, so do some pot-smokers rely on marijuana, and the small “communities” that form around weed’s ritualized use can further enable social avoidance or depression. It’s a problem the show has begun to acknowledge, as in Episode 6, “Googie,” where The Guy takes a hard look at his life and momentarily questions his profession (he even streams HBO’s The Wire, a show about the drug trade’s harmful effects on inner-city communities in Baltimore). Ultimately, though, High Maintenance is less a show about stoner culture (which is rarely depicted on screen) than it is an observational study of human life in a broad, holistic sense. The vast majority of The Guy’s clients aren’t stoners—they’re regular people struggling with ordinary human problems. As the same pastor from “Scromple” tells Julia later in the episode, “we all have our vices.” The point is not to dwell on our minor moral lapses, but rather to learn to see each other whole. “Besides,” the pastor declares, “I think God’s dealing with bigger things these days.”

It’s the world’s “bigger things,” like sorrow and pain, beauty and joy, that High Maintenance urges us to see. Against our ingrained indifference and hasty judgment, our capacity to notice lets us enter into deeper communion with our neighbors. The show doesn’t quite call this grace. But the warmth and affection with which it treats its characters teaches us to behold the people around us with the same careful, loving attention—not for what they can do for us, but simply because they are.