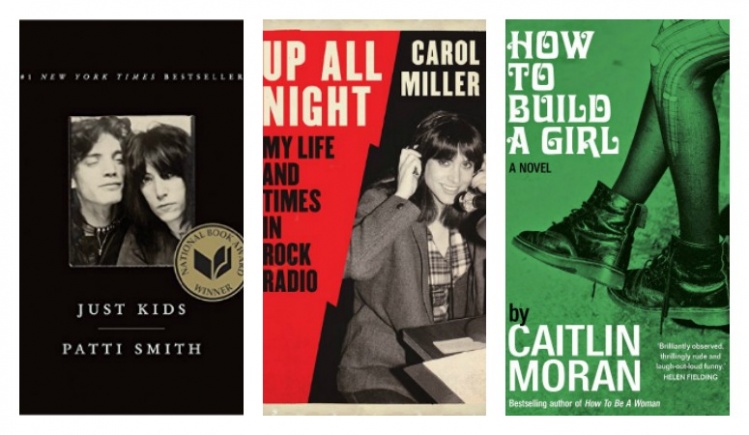 I will never be a performance artist, a radio personality, or the funniest woman alive. My own artistic dreams were not musical but definitely theatrical. Turns out every adolescent has a flair for the dramatic. The college stage brought my secret aspirations up short, but it is nice to imagine alternate realities.

Here are three excellent reads on the road less traveled, young women who stepped off the path and made their way, machete in hand, to a career based on their own passions. All three heroines are survivors, the soundtrack is rock ’n’ roll—Bob Dylan to Aerosmith to the Smashing Pumpkins—and every plot begins with a jailbreak from family.

Early in the performance artist, musician, and songwriter Patti Smith’s autobiography, Just Kids (HarperCollins, $16, 320 pp.), she describes her childhood dream of being, “Frida to Diego, both muse and maker.” Just Kids is organized around her longtime relationship with the controversial photographer Robert Mapplethorpe, and their parallel development as artists. Along the way it provides a window into the downtown New York scene of the late ’60s and ’70s. The book is full of small gossip, fun if you recognize the now famous painters, writers, and musicians, but best when she evokes the energy of an artistic community, the bonds of friends and lovers that fuel the strength to be creative.

Patti Smith is a wordsmith and this is a beautiful book. There are difficult subjects here, notably Mapplethorpe’s own sexual awakening as a gay man. She is forthright about her confusion and self-perceived shortcomings in the face of this event. The book ends with Mapplethorpe’s death in 1989 and the book is her memorial for Robert, but what resonates after is her survival and her song.

Patti Smith and Carol Miller cross paths just once in Carol Miller’s Up All Night: My Life and Times in Rock Radio (HarperCollins, $26.99, 272 pp.). They are at the famed Manhattan watering hole Elaine’s and it does not go well, a good reminder that none of us is as nice as our autobiographies claim.

And who, might you ask, is Carol Miller? If you grew up in New York City in the late ’70s, she was the preeminent female DJ on the FM dial. She narrated the soundtrack of my high-school homework and she can still be heard, rocking hard, on satellite radio.

Turns out Carol Miller is a nice Jewish girl from Queens who was supposed to grow up and be a doctor, or maybe a lawyer, picking up a husband and some children on the way. But safely tucked away in her room studying, radio waves found her and introduced her to a much different world. The pull between Miller’s passion for rock ’n’ roll and her family’s expectations around a serious occupation informs the whole of this book. Even as she builds a hugely successful career, she continues to question her choices and assumes that it is all temporary fun.

The New York Patti Smith describes is there in Up All Night, but the ’70s are now in full swing, hard rock is king, and the partying has gone glam. Miller loves the music, she loves the medium, but the corporate politics and groping hands, not so much. For readers under a certain age, this book will be an education on what an “enlightened” working environment once looked like.

Carol Miller is a survivor in every sense and she documents the bumps in the road as well as the amazing “luck” that allowed her to pursue her passion. Desire and talent still require hard work and determination.

To be perfectly clear, How to Build a Girl (HarperCollins, $26.99, 342 pp.) by Caitlin Moran is a novel, not an autobiography. Just to drive the point home, Moran’s dedication reads, “To my mother and father, who thankfully are nothing like the parents in this book.” And yet the components are familiar to readers of her other books, How to be a Woman, or Moranthology. So, our heroine Johanna Morrigan is not Caitlin Moran. Nonetheless, like the author the protagonist is the oldest girl in a large and chaotic family growing up in council housing in Wolverhampton in the West Midlands (fifth worst city in the world according to a 2009 Lonely Planet survey). Johanna—not Caitlin—is a very precocious teenager who decides to save her family from financial ruin by becoming a music journalist. Johanna creates an alter ego, Dolly Wilde, who is everything she is not—a brazen, overconfident, chain-smoking, opinionated hussy. She is fifteen. Of course her “Da” has to drive her to her first professional gig, reviewing a Smashing Pumpkins show (not a fictitious band), and much hilarity ensues. After the hilarity comes the hangover, but there is always another day and another gig at 7p a word.

Reading How to Build a Girl, I cleared all the seats around me on a rush hour express train laughing like a mad woman. Need I say more? Possibly, a trigger warning: If you are a current—or recovering—father of an adolescent girl, you probably shouldn’t read this book, unless you need reassurance that you are not in fact the worst parent in the world.

Gabrielle Steinfels is not a star of stage or screen, but produces plenty of drama as the mother of two in New York City.