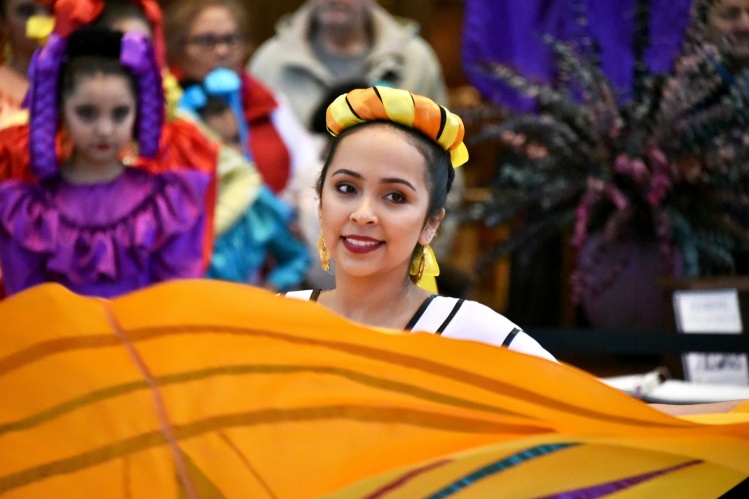 St. John the Evangelist Church in St. John, Indiana, after a bilingual Mass celebrated in honor of Our Lady of Guadalupe (CNS photo)

The U.S. Conference of Catholic Bishops is encouraging celebration of the Feast of Our Lady of Guadalupe on December 12 as a day of solidarity with immigrants. Dozens of events based on that theme are being held around the country.

It’s a good time to recall that Our Lady of Guadalupe is not only the patroness of Mexico, homeland to the largest U.S. immigrant group, but also the patroness of all the Americas—patrona de todas las Américas. Or as Pope Pius XII declared in an October 12, 1945 radio message, the patroness of the holy faith “en Méjico y en todo el continente americano.”

Yes, it’s a special day for Mexicans, one that touches the place in a country’s soul where religious cult meets culture. But it’s also a day of unity for all Catholics of the Americas. Pope Francis struck that theme in a “message to the Americas” in St. Peter’s Square on the eve of the feast in 2013:

When the image of the Virgin appeared on the tilma [cloak] of Juan Diego, it was the prophecy of an embrace: Mary’s embrace of all the peoples of the vast expanses of America—the peoples who already lived there, and those who were yet to come. Mary’s embrace showed what America—North and South—is called to be: a land where different peoples come together; a land prepared to accept human life at every stage, from the mother’s womb to old age; a land which welcomes immigrants, and the poor and the marginalized, in every age. A land of generosity.

It is a generosity we in the United States don’t seem especially inclined to extend, whether to human life at its earliest stages or to unauthorized Mexican immigrants who encounter a legal system in which they can be jailed without a lawyer to represent them and held for months, if not years. Mexicans, according to a leading study, are the least likely of the major immigrant groups to have a lawyer help them navigate notoriously complex U.S. immigration laws. The study by Ingrid Eagly and Steven Shafer of UCLA Law School, published in 2015 in the University of Pennsylvania Law Review, found that just 21 percent of Mexicans had representation in cases decided from 2007 to 2012. They were followed closely by Hondurans (23 percent) and Guatemalans (30 percent). In contrast, 92 percent of Chinese immigrants had lawyers.

Policing criminals is an obvious duty of any state, but stigmatizing large groups of people is not
sharetweet

The low rate of representation for Mexicans is the result of an immigration-court system that does not provide counsel for those too poor to afford a lawyer—a  Constitutional right in criminal cases, including minor ones. This is so even though the immigration courts send detainees to some of the same jails that house accused criminals.

The study found that Mexicans were also the nationality most likely to be detained when served with a deportation notice: 78 percent, compared to 4 percent of Chinese immigrants. The authors write: “These findings raise compelling questions as to whether Mexicans and other Latinos are being disproportionately targeted for immigration detention. Research into other aspects of immigration enforcement has shown that the availability of detention and deportation can incentivize law enforcement to engage in racial profiling of the Latino community.”

This study covers a period that ended several years before Donald Trump announced his candidacy for president with these words:

Policing criminals is an obvious duty of any state, but stigmatizing large groups of people is not. The Virgin of Guadalupe, the Mary of the Magnificat, pulls American Catholics away from such division and toward unity. Archbishop José Gomez of Los Angeles described this in a speech he gave July 27 to the Napa Institute:

Our Lady of Guadalupe reminds us that the Church was established to be the vanguard of a new humanity and a new civilization—one family of God drawn from every race and every nation and every language.

Right now in our country, and even in the Church, we see signs that we still have problems with nativism and racial prejudice. So we need to pray and we need to work harder to overcome our divisions.

The saints of the Americas show us that holiness knows no color. Beyond the color of our skin or the countries where we come from—we are all brothers and sisters. All children of one Father. And the Mother of God is our mother.

This is the message of Guadalupe.

The archbishop’s subject was the “de-Christianized” U.S. culture. Although the current surge of nativism has a great deal of support among white Christians, including white Catholics, it is indeed a facet of that “de-Christianized” culture. The mestiza Our Lady of Guadalupe, patroness of all the Americas, in contrast, opens her arms, speaking to St. Juan Diego in his Aztec language:

Am I not your mother?
Are you not under my shadow and my gaze?
Am I not the source of your joy?
Are you not sheltered under my mantle, under the embrace of my arms?