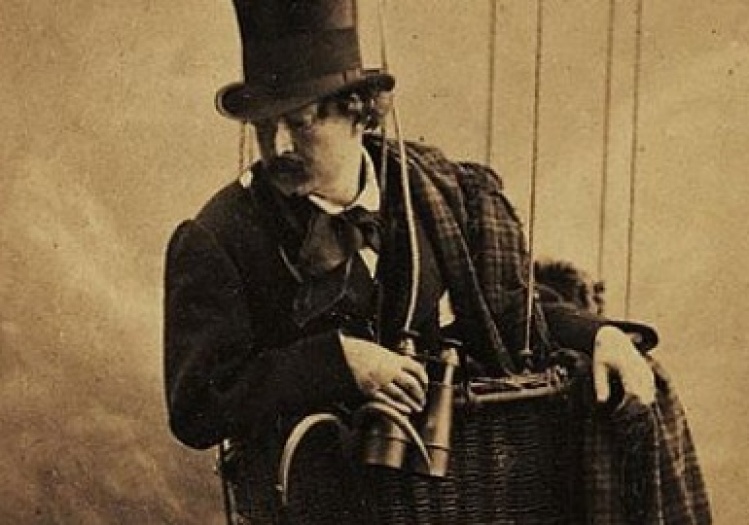 Levels of Life consists of an essay, “The Sin of Height” (twenty-eight pages), a story of sorts,  “On the Level” (thirty-six pages), and an elegy, “The Loss of Depth” (fifty-seven pages). The essay is an account of the nineteenth-century phase of hot-air ballooning, exemplified by Colonel Fred Burnaby of the Royal Horse Guards, who took off from the Dover Gasworks on March 23, 1882, and landed halfway between Dieppe and Neufchâtel; Sarah Bernhardt, who took off from the center of Paris in 1878 and landed near Emerainville in the département of Seine-et-Marne; and Félix Tournachon, better known later as the great photographer Nadar, who took off from the Champ de Mars in Paris on October 18, 1863 and crash-landed near Hanover. The main point of this essay is to introduce motifs of earth and sky, up and down, ballooning as vehicle of freedom, and the moral emblem of our looking at ourselves from afar, “with increasing truth.”

The first sentences of the essay read: “You put together two things that have not been put together before. And the world is changed. People may not notice at the time, but that doesn’t matter. The world has been changed nonetheless.” Barnes does not go on to remark that the figure of such putting-together in literary discourse is metaphor. The first person who looked at a ship under sail and thought of it as ploughing the sea created a new way of thinking. Without this invention, Sir Thomas Wyatt could not have written: “They flee from me, that sometime did me seek / With naked foot stalking within my chamber.” Nor Shakespeare:

That time of year thou mayst in me behold,

When yellow leaves, or none, or few, do hang

Upon those boughs which shake against the cold,

Nor Barnes, who has been putting untold things together since Flaubert’s Parrot and A History of the World in 10 1/2 Chapters. The first part of his novel The Sense of an Ending has Tony Webster living a circumstantial life, the second has him examining it, in sad retrospect. Nadar, the hero of “The Sin of Height,” put together “two of his three emblems of modernity: photography and aeronautics.” (The third was electricity.) As Walter Benjamin noted of him in “Paris, Capital of the Nineteenth Century,” “Nadar’s advance over his professional colleagues is characterized by his undertaking to take photographs in the sewers of Paris.” Barnes apparently holds that Nadar “first put two things together,” the two being hot-air ballooning and photography.

“On the Level” retains Barnes’s three characters, describes their flat, daily existences, and imagines a romance between Fred Burnaby and Sarah Bernhardt. The imagining is perfunctory; one is not sorrowful when it ends. There is an amount of easy talk about the aspiring motive of love: “So why do we constantly aspire to love? Because love is the meeting point of truth and magic. Truth, as in photography; magic, as in ballooning.” But neither of these is correct: photography is fiction, ballooning is science.

“The Loss of Depth,” an elegy on the death of Barnes’s wife Pat, is the best part of the book. Patricia Kavanagh was born on January 31, 1940, in Durban, South Africa. She moved to London in her early twenties and soon became one of the most successful literary agents, with a long list of top-line authors. She met Julian Barnes in 1978 and married him in 1979. She died of a brain tumor on October 20, 2008: “We were together for thirty years. I was thirty-two when we met, sixty-two when she died. The heart of my life; the life of my heart.”

I believe the last phrases, but the first sentence is evasive. It is common knowledge that sometime in the mid-1980s Pat Kavanagh left Barnes and went to live with the novelist Jeanette Winterson. The knowledge is common because Winterson disclosed it in an interview. After some time—I don’t know how long, except that the relation with Winterson ended in 1989—Kavanagh returned to Barnes and resumed their marriage. They remained together till she died. There is not a word about this episode in “The Loss of Depth.” Barnes may feel it’s none of our business. True, but then “The Loss of Depth” contains several privacies that are also none of our business. I think he should have dealt with it, giving us the rough with the smooth.

Pat Kavanagh was sixty-eight when she died. My father died overnight, I assume of a heart attack, when he was sixty-nine. I have never thought his death untimely. My father was lower-middle-class. I don’t think he ever consulted a doctor, or needed to. Nowadays, upper-middle-class people, or couples like Barnes and Kavanagh with two incomes, can easily afford medicines, specialists, hospitals, and if necessary nursing homes. They confidently expect to live well into their late eighties or early nineties. So Barnes finds it an outrage that his wife died at sixty-eight. Or perhaps that she would ever die. If Barnes believed in God—he doesn’t—he would denounce Him for the injustice. As it is, Barnes foists his denunciation on something he calls Life or “the universe,” finding it guilty of “stuff.” This word, repeated more often than necessary, comes to sound like Donald Rumsfeld’s famous explanation for looting in Baghdad: “Stuff happens.” Near the end of “The Loss of Depth,” Barnes says: “It is all just the universe doing its stuff, and we are the stuff it is being done to.” The only hope, apparently, is that, after the universe has done its stuff to someone we love, a northerly wind may blow our balloons to Barnes’s beloved France.

Meanwhile, Barnes grieves, as he is entitled to. Emily Dickinson has a poem that begins: “As imperceptibly as Grief / The Summer lapsed away.” It is not true of Barnes’s grief, which has not lapsed away, nor passed the time imperceptibly. He has detained it and surrounded it with broodings on dreams, memory, loneliness, pain, the work of mourning. Nor is it true, as another of Dickinson’s poems has it, that “The Missing All—prevented Me / From missing minor Things.” Barnes will not be prevented. Anything is sufficient provocation. Once or twice, he feels that Pat is indeed slipping away:

A widowed colleague of hers assures me that this is not unusual, that my memories will return, but there are few certainties left in my life, and nothing follows a pattern, so I am skeptical. Why should anything happen when everything has happened? And so it feels as if she is slipping away from me a second time; first I lose her in the present, then I lose her in the past. Memory—the mind’s photographic archive—is failing.

Barnes’s broodings are designed, I take it, to keep his wife alive by presenting her in many contexts—not just those they actually shared but new ones, new thoughts, new images, many places of fame and elegy.

Mostly these broodings are intelligent, often eloquent, and just to the elegiac occasion. But Barnes is sometimes hard. I wince when he tells of a “dinner-table conversation” in a restaurant “with three married friends of roughly my age.” Each, he says, “had known her for many years—perhaps eighty or ninety in total, and each would have said, if asked, that they loved her”:

I mentioned her name; no one picked it up. I did it again, and again nothing. Perhaps the third time I was deliberately trying to provoke, being pissed off at what struck me not as good manners but cowardice. Afraid to touch her name, they denied her thrice, and I thought the worse of them for it.

And I think the worse of him for putting his friends through such a horrible test, a morbid game. Obviously and decently, they didn’t know whether to speak of Kavanagh or not, and decided it would be safer not to. I would have done the same. But the most indecent part of the passage is “they denied her thrice.” Barnes would not use the word “thrice” in conversation. He would say “three times,” as he said  “the third time.” “Thrice” is an allusion to the rebuke Christ delivered to Simon Peter: “Verily, I say unto thee, that this night, before the cock crow, thou shalt deny me thrice” (Matthew 26:34). The allusion is impudent, far too weighted for such a trivial social failing, if failing it was.

Elegies are hard to read. We don’t know what distance we should try to keep. If the elegist tells us every detail, opens his privacy to us, we are gratified yet resentful, or at worst embarrassed: we didn’t ask to be so invited. If, like Barnes, the elegist keeps something back and we find it out elsewhere, we resent his secrecy. Reading an elegy, we are in the position of a reader of a novel, as Benjamin describes it in “The Storyteller”:

The novel is significant, therefore, not because it presents someone else’s fate to us, perhaps didactically, but because this stranger’s fate by virtue of the flame which consumes it yields us the warmth which we never draw from our own fate. What draws the reader to the novel is the hope of warming his shivering life with a death he reads about.

What draws the reader to an elegy is the same hope, darkened by the squeamishness we know awaits us.

Denis Donoghue holds the Henry James Chair in English and American Letters at New York University. His most recent book is Irish Essays (2011).