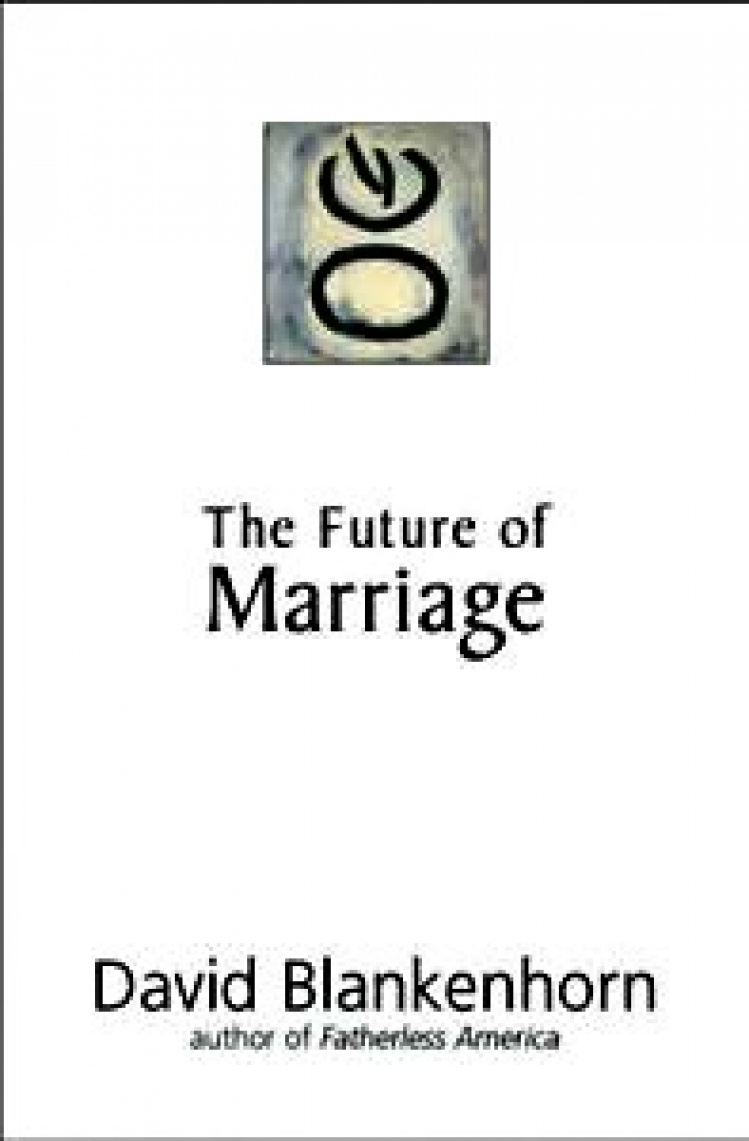 Just the other day, it seems, same-sex marriage was unthinkable—or even if thinkable, nonexistent, its anthropological and historical evidence rare, fragmentary, and usually explainable in other terms. Now, however, gay couples are being married or civilly united in several European countries and the United States, and criticism of same-sex marriage has become virtually unthinkable for Americans of a liberal disposition. Advocates of same-sex marriage have thoroughly appropriated the rhetoric of civil rights, nondiscrimination, and liberty, leaving others without a vocabulary to express their reservations. Caught between vociferous advocates who see themselves as successors to the civil-rights movement of the 1960s (and who tend to equate opposition with homophobia), and equally adamant opponents from the religious Right, many people of good will don’t know what to say about their unease over the rapid pace of change. They don’t know how to express their reservations in a way that will prevent accusations of bigotry.

The value of David Blankenhorn’s The Future of Marriage lies less in his debatable argument against legal recognition of same-sex marriage than in his reorientation of the debate itself, one which provides a much-needed vocabulary for principled critique and disagreement. Blankenhorn shows that the debate has been impoverished by a reductionist conception of marriage that ignores its actual social function, and distorted by an exclusive focus on individual rights rather than on marriage as an institution vital to the optimum development of children. Writing in a respectful tone, and conveying a genuine desire to find common ground with his opponents, Blankenhorn insists that the debate over same-sex marriage is not a battle between good and evil, but an example of what Isaiah Berlin called “goods in conflict.” As The Future of Marriage shows, the operative definition of marriage used today by American courts, legislatures, bar associations, journalists, and scholars is oddly sentimental. The usually hard-nosed journalist Gregg Easterbrook defines marriage as “more than anything else, the expression of love.” A New York State judge opines that marriage is “the utmost expression of a couple’s commitment and love.” The usually sober American Law Institute (of which I am a member) brings the news that marriage is an “emotional enterprise,” one defined uniquely by each couple. Such definitions not only emphasize the emotive character of marriage, but insist upon its malleable and private nature-even as they radically separate marriage from procreation. In its opinion requiring the legislature to redefine marriage to include same-sex couples, the Supreme Judicial Court of Massachusetts primly declared that any attempt to associate marriage and procreation would be “inappropriate.” Andrew Sullivan has commented that the “essence of a good marriage is not breeding” (emphasis added). There are serious problems with these new definitions of marriage, David Blankenhorn argues. What they fundamentally ignore is marriage’s identity as a social institution, by which he means a socially constructed way of living intended to meet social needs, and not merely the personal predilections of the individuals involved.

The Future of Marriage marshals anthropological and historical evidence to show that the “primary cross-cultural purpose of marriage as an institution is to ensure, insofar as possible, that the man and woman who make the child through sexual intercourse are there for the child, as social parents, and are there for each other.” Marriage developed to keep fathers linked to mothers and children through social and legal obligations. This universal function of marriage existed in both matrilineal and patrilineal societies, and has persisted throughout the many variations that the form of marriage has taken in different cultures. As Blankenhorn points out, an institutional definition of marriage entails certain key values. It assumes that marriage is intrinsically connected to sex and to bridging the male-female divide; to bearing and raising children; and to maintaining the unity of natural, legal, and social parenthood. It reflects a fundamental belief that children are better off with both a mother and a father. Once wholly uncontroversial, such assumptions are now widely rejected as benighted, as historical baggage from a bygone era. For example, it is often emphasized that many heterosexual married couples choose not to have children-so why should “breeding,” as Andrew Sullivan sneeringly calls it, be essential to marriage? Single motherhood, meanwhile, has become an option bearing little social stigma. And what’s so wonderful about having both a mother and father, anyway? As Philip Larkin famously announced, “They fuck you up, your mum and dad / They may not mean to, but they do.” Such arguments, Blankenhorn responds, conclude illogically that because marriages don’t always do what they are intended to do, the norm itself is invalid. In his view, marriage has always functioned primarily as an institution intended to give children the best possible chance of flourishing. That some couples do not procreate and others fail to help children flourish means only that it is a human institution, imprecise and imperfect. It does not mean that marriage must be recast as a private emotional arrangement with a merely vestigial or incidental social function. For Blankenhorn, therefore, the debate over same-sex marriage should be about not only whether there is a “freedom to marry,” or whether people have a right to marry whomever they choose regardless of gender; it should also address the question of whether providing access to marriage to gay couples will be good for marriage as an institution.

So The Future of Marriage redefines the argument as one not just about same-sex marriage but also about marriage itself, and as one not just about rights but also about the consequences of recognizing (or not recognizing) same-sex marriage for the functioning of a fundamental social institution. This redefinition of the debate illuminates a central, ironic question in the battle for same-sex marriage. If marriage is merely a subjective, emotional, privatized relationship, divorced from procreation and the raising of children, why should anyone fight to defend it or struggle to gain access to it? Why should anyone care about the public sanctioning of private, subjectively defined relationships? Why not be content with civil-partnership statutes that give partners the legal standing and practical benefits of married couples with respect to health care, pensions, property ownership, inheritance, taxation, and similar issues? One answer is that for many same-sex partners who want to marry, marriage is very important as a social institution-particularly for those who value stable relationships, want to have children, and see marriage as a public, legal means of claiming a legitimacy equal to that of married heterosexuals.

Even Blankenhorn, a self-described “marriage nut” who believes that marriage is the institution most important to the welfare of children, might concede that what he calls the “domestication” of gay relationships through marriage is good not just for same-sex couples, but for the institution of marriage itself and the welfare of children. He is not ultimately comforted, however, by that possibility. For every hopeful dimension in the same-sex marriage movement, Blankenhorn sees far greater threats. Some of the most ardent ideologues of gay marriage, he shows, are in fact hostile to marriage, attacking it from a feminist, Marxist, or queer-theory perspective as a fundamentally oppressive and outmoded institution that needs to be toppled from its privileged place in society. It should be replaced, in their view, by legal and social recognition of virtually any kind of family-like relationship that people of any sex, number, or character freely choose to create. For many antimarriage academics and activists, gay marriage is just the opening wedge of a full-blown assault on marriage. Blankenhorn quotes the feminist writer Ellen Willis, who predicts that “conferring the legitimacy of marriage on homosexual relations will introduce an implicit revolt against the institution into its very heart,” and law professor David Chambers, who touts same-sex marriage as a way of making inroads against the “hegemony of the two-person unit and against the romantic foundations of marriage.” Even as Blankenhorn condemns the cynicism and opportunism of antimarriage activists who exploit the same-sex marriage movement as a stealth means of undermining marriage, he fears that they may be right-that recognition of same-sex marriage will lead to a radical destabilization of traditional marriage and its essential social function. This concern, while not fanciful, may be exaggerated. To be sure, in 2006 several hundred public intellectuals and prominent cultural figures issued a statement titled “Beyond Same-Sex Marriage,” in which they asserted that “marriage is not the only worthy form of family or relationship, and it should not be legally and economically privileged above all others.” But does their enthusiasm for group marriages, polyamory, polygamy, and yet undeveloped forms of relationship really reflect the views of those ordinary gay and lesbian couples flocking to the altar, who mostly seem interested in something pretty conventional? Furthermore, the practical difficulties of developing a workable legal framework for an ever-shifting panoply of group “marriages” and “families” is likely to slow such developments dramatically. Family law for traditional male-female marriages is already dauntingly complex and contested. The legal instability created by the “families” contemplated by “Beyond Same-Sex Marriage” could have negative practical consequences that would make those options unpopular. Blankenhorn may be worrying too much, and pressing too hard on the slippery-slope argument as a justification for opposing same-sex marriage. His argument against same-sex marriage also relies too heavily on debatable conclusions about the relationship between legal recognition of same-sex marriage and the decline of marriage in general. Data about numbers of marriages, divorce rates, out-of-wedlock births, and fatherlessness from European countries that have recognized same-sex marriage may show some correlation between that recognition and the general weakening of marriage. But it is difficult to assume a causal relationship, especially given other reasons for the instability of marriage in Europe. Indeed, much of the debate over The Future of Marriage has been precisely over this point: Do the data support Blankenhorn’s conclusion that allowing gay and lesbian couples to marry will weaken marriage as an institution? At this point, his case is not yet proved. Another of his cautionary predictions, however, has already come to pass. As constitutional nondiscrimination principles are extended to sexual orientation in general and same-sex marriage in particular, a collision between those new rights and religions’ First Amendment rights is inevitable. In Massachusetts, the conflict over Catholic Charities’ refusal to place children for adoption with same-sex couples resulted in the organization’s decision to end its entire adoption program rather than comply with the state nondiscrimination requirement. Of course, many Catholics disagreed with the policy in the first place; yet the case exposes the limits on religious institutions’ ability to rely on the First Amendment to protect faith-based practices that discriminate on the basis of sexual orientation. When the right to religious freedom collides with the new constitutional rights of gay people, their rights will trump in most cases. Is that a reason to oppose same-sex marriage, as Blankenhorn would conclude? Perhaps not. Still, little comfort should be drawn from characterizing this battle as a matter of “goods in conflict.” The triumph of one good may lead not to an erosion of marriage, but to an erosion of religious freedom. And that would not be good at all.