‘When Two Feathers Fell from the Sky’
By Katherine Lucky
Fiction 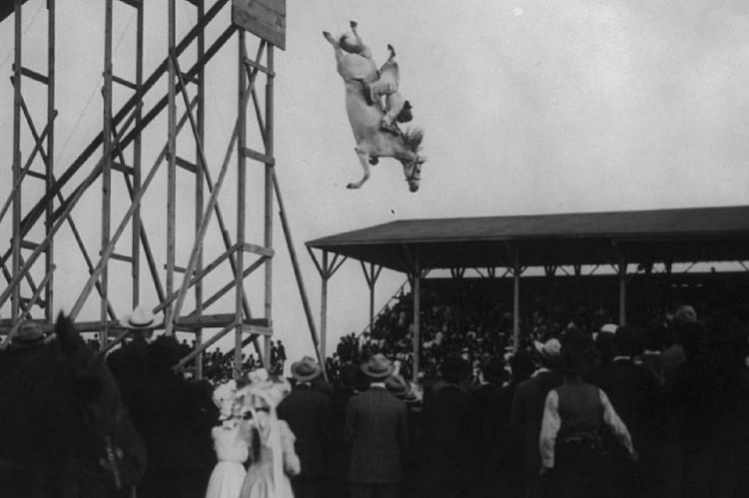 But in some contemporary literature, Brogan argues in her seminal article “American Stories of Cultural Haunting,” ghosts take on new meaning. Writers of color—Louise Erdrich, Toni Morrison, Cristina García—use phantoms not to symbolize threat but to “recreate ethnic identity through an imaginative recuperation of the past.” Their characters’ ancestors were subjugated, colonized, and displaced. They suffered bloody deaths and were buried in unmarked graves. It’s no wonder their spirits still roam the earth. But they aren’t necessarily malicious, at least not forever. These books follow a “movement from possession to exorcism—or more accurately, from bad to good forms of haunting.”

When Two Feathers Fell from the Sky, Margaret Verble’s new novel, is just this kind of ghost story. It follows Two Feathers, a visiting horse diver at Nashville’s Glenville Park Zoo in the summer of 1926. One day, her routine—diving from a high platform into a pool of water, on the back of a horse—goes terribly wrong. The rest of the book is consumed with Two’s recovery from injury, her reckoning with a sinister zookeeper, and the stories of other people who live on the park’s property. Near the novel’s close, the zoo’s animals come under threat. It’s an unusual structure that saves major plot points for the beginning and end, with a middle designed to process what’s happened and worry about what’s to come.

Two loves these creatures, communing with the bears and buffalo. She “smudges,” burning cedar and sage to cleanse tainted spaces. She hears her grandmother’s voice, though she lives miles away on an Oklahoma ranch with the rest of Two’s extended family. And she’s haunted—protected by the ghost of a Cherokee brave named Little Elk who was killed centuries ago in a skirmish with white settlers on Glenville’s property. The ghost scrounges for tobacco; he gets jealous and petulant. He wants to be acknowledged and remembered. And he isn’t evil.

Verble writes these characters skillfully, emphasizing their humanity without dismissing their racism.
sharetweet

The same can’t be said for the novel’s flesh-and-blood characters: namely, a white, red-headed zookeeper named Jack, who has a fetish for Indian culture and a sinister obsession with Two Feathers. Calling himself “Strong Red Wolf,” he desecrates native graves for artifacts to sell and stalks Two around the park. He tries to gain her favor with ice cream and flowers. When he’s snubbed, he takes revenge. Little Elk calls him the “murderous night-going witch.”

Jack’s transgressions are sexual as well as racial. As a child, learning that his parents’ farm sat on Cherokee land, he makes a mistake: “Instead of concluding the land had been stolen, he decided the Cherokee must be his tribe.” This original sin has made him brazen and entitled.

But Jack’s crimes are only the novel’s most explicit manifestations of the prejudice held by many of the people living and working at the park. Verble writes these characters skillfully, emphasizing their humanity without dismissing their racism. Mrs. Hampton, the kindly dorm mother for female performers, sets aside sandwiches for her charges. She longs for romance. She also doesn’t “know if Two should be treated like a white or a Negro. And that was important. Standards had to be maintained.” (Mrs. Hampton eventually softens; putting her arm around Two’s shoulders, she’s surprised by her tenderness, finding it “both odd and natural.”) Then there’s the zoo’s wealthy owner, Mr. Shackleford. At the close of the Civil War, his slave-holding family endured poverty and near-starvation, suffering from what he calls “the brutality of morally righteous victors.” He’s a sympathetic man, and also a bigoted one. He’s unsure if Two should be taken to the “good” hospital after her accident, and uneasy about one of his employees, Crawford—son of a respected Black family who’s possessed of an authority that doesn’t sit right with Shackleford.

White characters aren’t the only ones attuned to subtle distinctions of skin color and class. Two notices that Crawford, her closest friend at the park, is “lighter than a brown paper bag.” But she’s “used to people being mixed and had never asked about his ancestry.” Her own family are “mixed and modern Indians,” farmers and ranchers with “a lot of white ways.” Crawford is in love with the daughter of another prominent Black Nashville family, but the two clans have never married into each other. “The Boydstuns were somewhat darker in shade,” and in their estimation, “the Crawfords, as a family, didn’t do enough for the race.”

Two worries for her own race’s future: “Her children wouldn’t be Cherokees; born after the allotment rolls were closed, they’d be white people by law. Like her profession, her tribe, her people, her history, were fading and narrowing to nothing.” Smudging, writing letters home, recognizing the spirits of caves and rivers and animals, eventually rejecting alcohol—through all of these rituals, she preserves her endangered culture. What a comfort, then, to have Little Elk close by for a time, flickering in and out of view, offering war whoops to the sky. At first she’s unsure of him—he may be a witch in disguise. But her instinct says he’s friendly. “Haunting,” Kathleen Brogan argues, “is necessary to the maintenance of historical meaning.” A world without ghosts would be a lonely one, a “loss of significance” for people who have already lost so much.

You’re in the thick of things with the characters, trying to figure out what’s important.
sharetweet

When Two Feathers Fell from the Sky is a heavily plotted novel. There’s a freak accident, a rescue, some murders, and some mystery. The book has sex scenes and a hippo and a lemur on the loose. It’s a novel crowded with noise and color, hot and sticky as a Nashville summer—scented with popcorn, lit by electric lights, roaring with crowd noise.

And yet, Two Feathers doesn’t read like a thriller. It’s too long. It’s slow. It takes its time talking about the logistics of turtle races and walking routes, offering backstories and conjectures and context. At times, this is a tedious read, bloated with details of time and place. From the Scopes Trial to the evangelist Aimee Semple McPherson, from tycoons to James K. Polk, the book is almost overly situated in history. It’s packed with secondary characters’ love plots and familial tensions and money troubles and traumas, not all of which are satisfactorily resolved. Conversations move slowly, sometimes repeating themselves or wallowing in irrelevancies. As a reader, you never have a privileged vantage point. You’re in the thick of things with the characters, trying to figure out what’s important.

Perhaps it’s best to conceive of When Two Feathers Fell as a novel of ambience, just as interested in setting a mood (Tennessee, 1926) as in telling a story. And that mood—despite instances of camaraderie, romance, and ultimately, victory—is grief. Little Elk isn’t the only ghost stalking Glenville’s grounds. There’s a World War I soldier shot in the trenches who haunts a caretaker suffering from PTSD. A Confederate soldier clanks around in loud boots; Mr. Shackleford’s wife, May, hears his stomping, and remembers the wounded and sick of both sides. At this tumultuous moment in history, not far removed from wars and enslavement and the Trail of Tears and a flu pandemic, everyone is living with loss, tending to shared pains and private injuries.

People can exist only in their own time. Even ghosts, arrived from the past to avenge and protect, vanish when their “unfinished business” is completed. But the land remains. When Two Feathers Fell begins with an elegiac ode to the zoo’s grounds. It’s lined with old buffalo traces, and pocked with mass native graves pillaged for arrowheads and pot shards, then exhumed in order to provide a twirling calliope and picnic grounds for the people of Nashville. This story takes place “long after the buffalo thundered toward the great salt lick in lines,” and “after the braves stalked game every fall and winter, won an occasional scalp in a fray.” It takes place after “bones were broken and tossed,” and “loot enriched several universities, museums, and private collections.” But the past is entirely the present in this place: “after” might as well be “during.” Two worries that the “hidden deaths of the park” have been “wiped out of memory, completely erased.” It turns out nothing could be further from the truth.