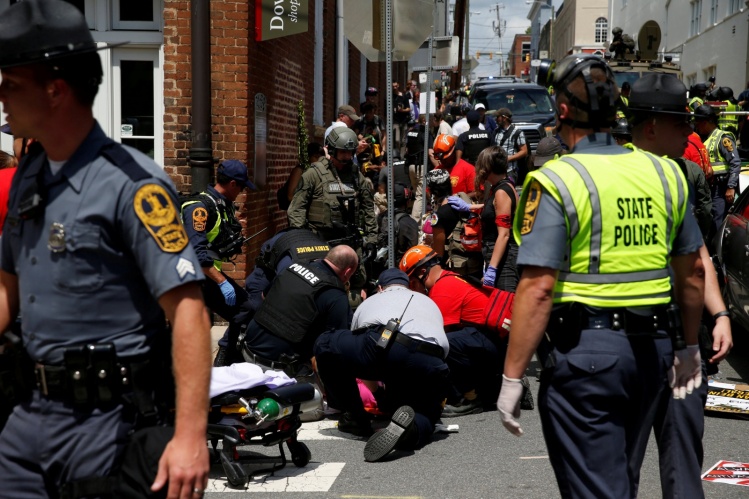 Rescue workers assist people who were injured when a car drove through a group of counter-protesters during a white nationalist rally in Charlottesville, Va., Aug. 12. (CNS photo/Joshua Roberts, Reuters)

The heavy weaponry in the hands of angry far-right protesters provided an ominous context for the deadly rally in Charlottesville on August 12. The local police chief had warned about it when the city sought to redirect the rally from Emancipation Park to another locale he said could be policed more easily, but that concern was brushed aside when the American Civil Liberties Union of Virginia (ACLU) successfully urged a federal judge to let the extremists rally in the park of their choosing.

In an affidavit filed at a federal court in Virginia, Police Chief Al S. Thomas said that intelligence reports showed that participants in the rally would be carrying guns. “The risks associated with the presence of firearms would be exacerbated by holding a Rally with a large number of participants in the relatively confined area of Emancipation Park,” he wrote.

He said police had learned from far-right agitator Augustus Invictus that 150 “security personnel” from groups called the Alt Knights and the American Guard would participate. These groups delight in portraying themselves as a menace.

On their Facebook page, the Alt Knights sell a sort of uniform for rioting: black helmet, respirator, goggles and shin guards, black hoodie, Second Amendment sticker in the shape of skull and crossbones. Cudgel not included but clearly part of the look. The American Guard’s Facebook page is topped by an image of Daniel Day-Lewis in his role as the fearsome Bill the Butcher in the film “Gangs of New York,” wearing the Trump campaign’s signature red baseball cap marked “Make America Great Again.” In keeping with the butcher theme, the group’s shield features a pair of crossed meat cleavers. Bill the Butcher—William Poole—was a historical figure, a vicious Nativist gang leader who fought to the death against Irish-Catholic immigrants who had fled the Famine to settle in New York’s squalid Five Points section.

This is not the “well regulated” militia the Founding Fathers had in mind when they drafted the Second Amendment.

In its legal brief, the ACLU contended that since the city had allowed a large multicultural festival to be held in Emancipation Park, it could also accommodate a big crowd at the rally that was proposed for August 12. Not to do so showed a political bias on the part of the city government, the ACLU argued successfully.

But people were not toting assault rifles and wearing flak jackets at Charlottesville’s Festival of Cultures, “a day of free family-friendly fun with all-day entertainment.”  Nor did they arrive at the festival spouting Nazi-like propaganda and announcing that they were going to take over the town; the aim was “to create a space where all can meet, share in, and learn about each others’ cultures.”

The heavy weaponry put police at a distinct disadvantage as they tried to maintain safety.
sharetweet

The heavy weaponry put police at a distinct disadvantage as they tried to maintain safety. Chief Thomas denied that his officers were intimidated by the protesters’ weapons, but the armaments must have affected their strategy. That some of the counter-protesters also carried rifles—the Redneck Revolt, which styles itself after abolitionist John Brown—heightened the fear of a violent confrontation. The fatal weapon turned out to be a Dodge Challenger rather than a firearm. But from the start, firearms made the battle between rival protesters much more than a war of words, or even of fists and sticks. That set the stage for the attack that took the life of Heather Heyer and could well have claimed many more.

No country in the world protects the right to hate speech as strenuously as America, and as painful as that can be at times, it has served the nation well by providing a release valve that repressive societies lack. Such is the American commitment to freedom of  expression that  even hateful speech advocating violence is lawful unless it is “directed to inciting or producing imminent lawless action and is likely to incite or produce such action.” (In the 1969 ruling in Brandenburg v. Ohio, the Supreme Court threw out the conviction of a Ku Klux Klan leader who advocated violence.)

Free speech is a valuable right to protect, and we’re fortunate that courts have gone to great lengths to preserve it. But the semi-automatic weapons that protesters toted at the Charlottesville rally, along with a collection of shields, clubs and other riot paraphernalia, provided an actively threatening dimension to the violence-tinged speech being exercised—and that should not have been ignored. It was, though. Judge Glen E. Conrad’s ruling avoids the entire question of whether there was to be an incitement toward “imminent lawless action,” and makes no mention of the police chief’s concern about guns. Then again, court records indicate that the city of Charlottesville provided the judge with only sketchy details about the danger that firearms added to the Emancipation Park rally.

Still, the city did correctly predict violence. “We firmly believe there is a threat of violence if it takes place in Emancipation Park,” City Attorney S. Craig Brown told the judge the day before the rally, urging that the protest be moved to a larger park where it would be easier for police to do their job.

What can be done now?

A statement that numerous Catholic organizations issued on August 16—including Franciscan Action Network, major religious orders and their conferences, and Pax Christi—offers the path of vigorous, nonviolent resistance. This is how it concludes:

We are called by our faith to be bold witnesses to nonviolence, and to nonviolently resist any display of hatred and violence.

As Catholics, we uphold the finest traditions and examples of nonviolence, and commit ourselves, in Pope Francis' words, "to make active nonviolence our way of life." Our faith calls on us to accompany and protect our African American sister and brother, and all God's people, and to work for a day when the Beloved Community will become a reality, and hatred, intolerance, institutional racism, violence and injustice will find no place among us.

But we must be vigilant. Now is the time to be bold, to be public, and to let our voices be heard.