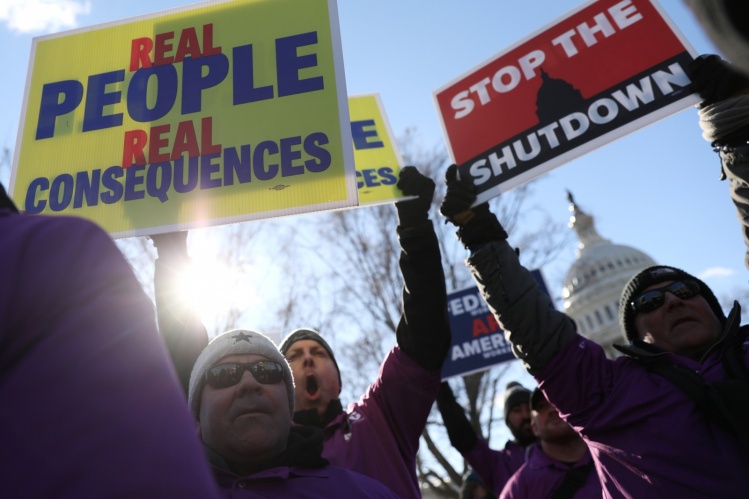 “The nine most terrifying words in the English language are, ‘I’m from the government, and I’m here to help.’’’

Ronald Reagan’s 1986 statement still invokes chuckles on the right and some nostalgia for the general good nature of his gibes.

But the sentiment behind it remains one of the most destructive forces in our politics.

If you bemoan the shutdown of so many federal agencies and regularly ask yourself why our two parties seem to be at sword’s point on just about everything, you will not find an adequate explanation for our troubles in vague claims that “both sides” have become “extreme.”

Underlying the contemporary conservative view is a belief that government is oppressive no matter what form a political system takes.
sharetweet

Our core problem is a dogmatic anti-government attitude, reflected in Reagan’s quip, that arose in the 1970s and 80s. This makes it impossible for us to have a constructive debate about what government is for, what tasks it should take on, and what good it actually does.

In truth, the whole anti-government thing is fundamentally fraudulent. So is the conservative claim to believe passionately in states’ rights and local authority.

In practice, conservatives regularly vote for lots of government—so long as it serves the interests they represent. Start with farm subsidies, massive defense spending, regulations that disempower unions, and measures that sharply tilt the tax code in favor of corporate interests and the wealthy.

As for the power of states and localities, conservatives regularly propose federal action to override state governments that issue safety and environmental regulations that business regards as too robust. Somehow, they think we need national “consistency” on these matters but not on, say, voting rights. And right-wing state legislatures regularly pre-empt laws passed by more liberal local governments.

Hypocrisy is troubling enough, but the anti-government ideology is the source of even more problematic habits. Recall another famous Reagan line: “In this present crisis, government is not the solution to our problem; government is the problem.”

The shutdown reminds us that government is not the problem but the solution, or at least part of it, when it comes to many aspects of our common life.

We can see the damage done to the air transportation system, bureaus that gather useful economic statistics, the Internal Revenue Service, the FBI, the Drug Enforcement Administration and the Bureau of Alcohol, Tobacco, Firearms and Explosives. Add in the Coast Guard, Customs and Border Protection, the Forest Service and the Weather Service. And this is a very partial list.

The glee with which President Trump has talked about a shutdown for months reflects an old conservative trope: Government is so bad, plodding and, well, useless, that people won’t mind if it disappears for a while. This faith explains why Republicans were equally cheerful when they shut down the government in the mid-1990s during a budget fight with Bill Clinton’s administration.

Their assumption was as wrong then as it is now. Underlying the contemporary conservative view is a belief that government is oppressive no matter what form a political system takes.

Dick Armey, the Republican House majority leader during the Clinton-era shutdown, was as candid as anyone in revealing the hidden radicalism that serves a straitjacket on our politics.

“Beneath our New Deals and New Frontiers and Great Societies,” Armey wrote in a book published in 1995, “you will find, with only a difference in power and nerve, the same sort of person who gave the world its Five Year Plans and Great Leaps Forward—the Soviet and Chinese counterparts.”

Sorry, but no. FDR, JFK and LBJ were not Stalin or Mao, nowhere close. Only by examining the anti-government view in its unabashed form can we understand why our two parties can’t be seen as equivalent and why rational negotiations are so difficult. Trump’s utter indifference to the basics of his job makes matters even worse, but the conservative neuroses toward government long predates his rise.

Some on the right are willing to call a halt to an argument that is serving us so badly. The work of both Jerry Taylor and Samuel Hammond at the libertarian-leaning Niskanen Center has aroused great interest because it faces up to what has long been true: Many “big government” countries (in Scandinavia, for example) are also among the freest nations on earth. It is time, Hammond argues, to blow up the “ideological axis” that runs from “‘small government’ libertarian’“ to “‘big government’ progressive.”

So it is. Sweeping aside misleading ideas won’t guarantee us better politics. But abandoning them is a precondition to escaping the trap we’re in—and ending the madness of shutdowns.