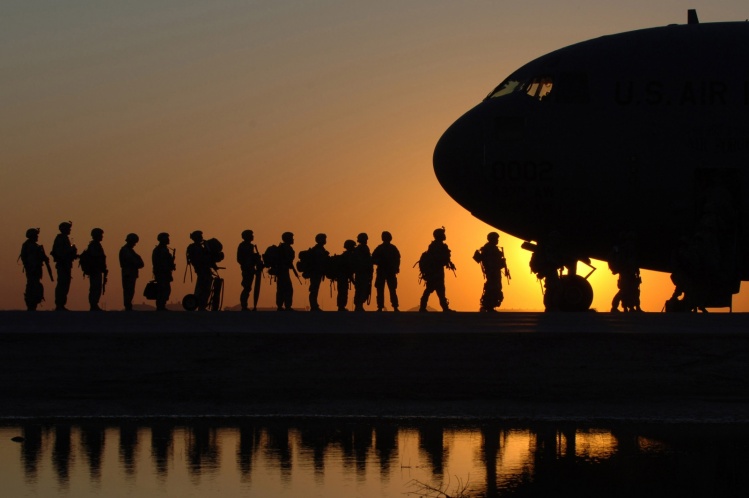 Earlier this year, when President Biden announced his intention “to end this forever war,” he was referring specifically to Afghanistan. The events of August fulfilled Biden’s wish, even if not quite as neatly as he might have hoped. Twenty years after it began, the Afghanistan War concluded with an unambiguous victory for America’s adversary. The Taliban fought to expel all foreign occupiers; they accomplished their aim. By comparison, the United States came up empty-handed.

Yet despite this setback, little evidence exists to suggest that the larger conflict of which Afghanistan was a part will end anytime soon. Indeed, hardly had the Taliban regained power in Kabul than the Pentagon was pivoting back to the forever war’s point of origin.

Recall that, in the hierarchy of substantive U.S. interests, impoverished and landlocked Afghanistan has never ranked especially high. By comparison, for decades now, policymakers in Washington have obsessed about the oil-rich Persian Gulf.

On that score, the forever war actually dates not from September 2001 but from January 1980. That’s when President Jimmy Carter used his State of the Union Address to issue a manifesto of sorts. Henceforth, Carter announced, any “attempt by any outside force to gain control of the Persian Gulf region will be regarded as an assault on the vital interests of the United States of America.” Lest anyone misunderstand his meaning, he vowed that “such an assault will be repelled by any means necessary, including military force.”

President Carter’s dictum stands in relation to the forever war as Adam’s first taste of forbidden fruit does to the fallen state of humankind: it is the Original Sin.

This Carter Doctrine, as it came to be known, derived from two crucial assumptions: first, that the American way of life depended on ensuring unfettered access to Persian Gulf oil; second, that the best way to ensure that access was through the concerted application of U.S. military power.

Even today, regardless of the serial disappointments and complications encountered since Carter drew his line in the sand, the prospect of fighting in or within some proximity of the Persian Gulf remains a centerpiece of U.S. grand strategy. While the identity of the presumed enemy has changed over time, the Carter Doctrine itself remains firmly in place.

In 1980, the “outside force” to which Carter alluded was the Soviet Union. A decade later, as the USSR disintegrated, Saddam Hussein’s Iraq emerged as the primary threat. Today, with Hussein long gone and after a protracted interval of conflict against various tribes, sects, militias, and jihadist groups, the Islamic Republic of Iran provides a continuing rationale for the Carter Doctrine.

While the Persian Gulf may qualify as a vital interest for some nations, it should not rank among the vital interests of the United States.
sharetweet

So it was that just days prior to the twentieth anniversary of 9/11, the Pentagon raised the curtain on what may well be the forever war’s next chapter: The U.S. Navy announced the formation of Task Force 59, as part of the Fifth Fleet, headquartered in Bahrain. According to a breathless Pentagon press release,

Task Force 59 will be the U.S. Navy’s first employment of unmanned aerial systems (UAS), unmanned sea vessels (USV), and unmanned underwater vehicles (UUV) in numbers that combine their capabilities with manned platforms for multidomain operations in all areas of the maritime battlespace from air to below the sea with the goal of using unmanned systems that have not been used before.

Unpacking that jargon is not a task for the faint of heart. But this much seems certain: as an instrument for enforcing the Carter Doctrine, Task Force 59 is on deck to play a leading role in the forever war’s next iteration. In that regard, it joins a long list of enforcement mechanisms, frequently referred to as “doctrines” in their own right, but which actually amount to little more than methods of implementation.

After 9/11, the Bush Doctrine of preventive war emphasized invasion pursuant to regime change. The results fell well short of satisfactory. Much the same applies to the 2.0 version of the Bush Doctrine, which embraced counterinsurgency in a vain effort to restore stability to countries that the United States had destabilized. Next came the Obama Doctrine with its emphasis on airstrikes and special-operations forces to reduce U.S. casualties. Now we can look forward to “multidomain operations in all areas of the maritime battlespace.” Surely, some enterprising newspaper columnist will detect in the references to UAS, USV, and UUV the makings of a distinctive Biden Doctrine.

Let me suggest that we do indeed need a Biden Doctrine. But before the Fifth Fleet unleashes Task Force 59, the Biden administration would do well to address a prior question: Does Jimmy Carter’s characterization of the Persian Gulf as a vital U.S. interest still hold water? In 1980, the United States was dependent upon imported oil. Today, it leads the world in oil production. In 1980, oil lubricated the American way of life. Today, preserving the American way life requires urgent action to curb the use of oil and other fossil fuels. So while the Persian Gulf may qualify as a vital interest for some nations, it should not rank among the vital interests of the United States.

The United States absolves itself of further responsibility for policing the Persian Gulf. That task properly belongs to the countries in and around the Gulf itself. The United States encourages those countries to collaborate in pursuing policies of peaceful coexistence. Should they choose otherwise, the consequences will be theirs.

Going forward, we will prioritize matters that pose an immediate threat to American freedom and democracy. In that regard, we have more than ample work right here at home.

Theologians contend that Original Sin is indelible—once committed, it cannot be removed. That principle need not apply to the Carter Doctrine. Outright absolution for sins committed pursuant to the Carter Doctrine might not be possible. But contrition and a sincere commitment to make restitution and sin no more should suffice.

As for all those expensive UAS, USV, and UUV, perhaps the Pentagon could find alternative uses. For example, with the prior agreement of affected Latin American nations, the Pentagon might consider repositioning Task Force 59 within the Amazon River Basin. For years now, the planet’s most important carbon sink has suffered from various forms of abuse, including widespread deforestation. Perhaps all those high-tech platforms could be deployed to track down the culprits and repair the damage they have done—an alternative approach to multidomain operations.