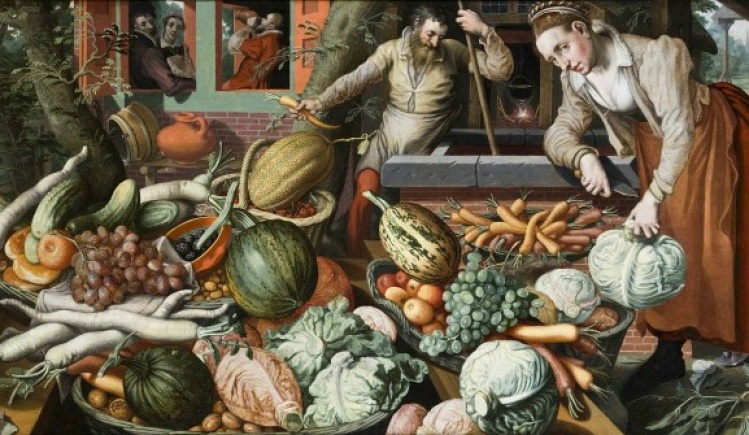 The slogan “the personal is political” traces to student-protest and feminist movements of the 1960s, and was an attempt to close the gap between public and private politics—between one’s theoretical commitments to society and the daily power dynamics of workplace and family. More recently the sentiment has dovetailed with identity politics, in the process migrating from such nuts-and-bolts questions as Who does the housework? to unexpected issues... like food.

Our relationship to what we ingest—that most personal of relationships—has become broadly politicized. Class, nutrition, and school lunches; the sins of industrial food production; the struggle for fair treatment of restaurant workers and farm laborers; the ongoing controversies over genetic modifications, force-fed geese, or animal rights more generally: bit by bit we have enlarged the “seeing beyond the table” dimension of culinary life. A good deal of this is salutary, in my opinion anyway.

Then there’s the identity-politics part, and the increasingly large role that what we eat—and don’t eat—plays in our self-understanding. Columnist Roger Cohen, in a mildly snarky New York Times essay last fall titled “This Column is Gluten-Free,” set out to tweak what he considered the potential for self-indulgence in this trend. He noted the explosive rise in diagnoses of celiac disease in recent years “among the global middle class,” and continued:

Special dietary needs are all the rage. Allergies, real or imagined, multiply. One in five Britons now claim some form of intolerance, yet a 2010 Portsmouth University study found the claims were often unfounded. The narcissism of minor differences finds expression in the food-intolerance explosion: Having a special dietary requirement is one way to feel special in the prevailing “me” culture.

“Where people wanted to change the world, now they want to change their bodies,” Cohen concludes. “The epidemic of food intolerance has gone way over the top.”

Do you agree? I’m certainly tempted.  I know, I know, I can hear the outrage—where do you get off, criticizing people’s allergies? And yes, clearly there exist true sufferers who experience intestinal misery when they eat gluten. But the contrarian in me sees how food choices in our culture have become  badges of political affiliation, moral status claims, even rerouted hopes for salvation. If politically you’re the sort of pre-postmod citizen who focuses on such, well, lunch-pail issues as equal pay, economic inequality, the gutting of labor unions, racial discrimination in hiring and housing, and so on, the therapeutic wing of the progressive American sensibility may seem misguided and even precious, and especially when it comes to food.

I should mention that I’m a restaurant reviewer for the New York Times, was for years a writer for Bon Appétit, and am an avid cook and restaurant habitué. Yet I wince when the excellent Times food writer Kim Severson praises the “philosophy” of famed Chez Panisse chef Alice Waters for holding “that the most political act we can commit is to eat delicious food that is produced in a way that is sustainable, that doesn’t exploit workers and is eaten slowly and with reverence.”

The most political act we can commit—eating delicious food? Certainly there’s something askew in that. And what is askew relates to large trends in our culture. While gluttony is generally held to consist in morbid overeating, it’s worth reminding ourselves that historical conceptions of this vice, including the Catholic Church’s, have been more expansive, including not only eating too much but also, as Aquinas noted, too eagerly. Gluttons are overly preoccupied with food, to the point of glorifying it; as Paul says in Phillippians, “their god is their stomach.” And—from the cult of the chef to the fifteen-course tasting meal that costs an average worker’s weekly pay—there’s a lot of that going around these days.

One can view the politicized-food phenomenon as a cultural iceberg whose uppermost tip consists of such challenging and rewarding texts as Michael Pollan’s The Omnivore’s Dilemma, David Foster Wallace’s classic on killing lobsters, Jonathan Safran Foer’s 2009 polemic, Eating Animals—or B.R. Myers’ sarcastic, barbed broadsides against foodie excesses in his Atlantic essays, “Hard to Swallow” and “The Moral Crusade Against Foodies,” in which he issues blasts of mockery against what he calls “the idolatry of food.” These texts exist in productive and sometimes abrasive conversation with one another.

Far, far below this textual tip of the iceberg, at the mundane level of What We’re Doing This Weekend, is the challenge of organizing a dinner party. Here, the already formidable problem of trying to find a night when everyone can get together has been greatly compounded by the detailed list of dietary restrictions, avoidances, objections, concerns, and plain old dislikes that dinner guests now freely issue.

Recently I set out to host a small dinner for Molly, myself, and three other couples. Having expended several emails and deployed Venn diagrams in order to discover the unique overlapping free night in the next ten weeks of everyone’s packed schedules, I circulated an email inquiring about “any culinary restrictions or aversions.” Oops! What I got back from the three invited husbands sounded like Bachelors # 1, 2, and 3 introducing themselves in some crazed Culinary Dating Game. Number 1 listed “mushrooms, zucchini, eggplant, shrimp, shellfish, any meat with bones, broccoli, artichokes, and [for his wife] avocado, red beans, raw onions.” Number 2 offered that he eats “fish, cheese, eggs, legumes, but not order mammalia,” while his wife “suffers from mild oral allergy syndrome, so raw vegetables or anything tartar would not be to her preference. And mayonnaise is verboten.” Finally, Number 3 informed me that “I am not a red meat or pork eater, and my wife is allergic to avocado.” He added that if I made red meat, he’d be happy to just eat extra veggies, and offered the hope that "this doesn’t sound too fussy."

Too fussy? No, just impossible! These guests include some of my very best friends, people whose company I enjoy and whose kindness, loyalty, wit, and other stellar qualities I can vouch for. But reading their emails, I found myself laughing helplessly. More and more these days, the beleaguered host throws up his hands. How ever to design a meal around the finicky predilections of the dairy-free, gluten-free, lactose-intolerant, vegetarian, vegan, shellfish-spurning, sugar-avoiding, order-mammalia-worshiping herd of Morris the Cats that make up the American dinner party these days?

When it comes to your friends and their food intolerances, where is the line that demarcates necessary sympathy from sensible skepticism on this issue? And whatever happened to simply eating what is on your plate?