'Finale: A Novel of the Reagan Years' 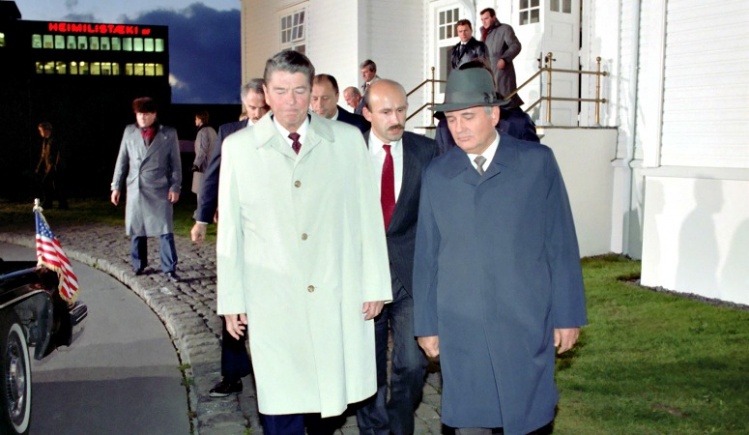 The acknowledgments page may seem an odd starting point for assessing a novel, but in the case of Thomas Mallon’s Finale, set during Ronald Reagan’s second term as president, it is a useful place to begin. “I have operated along the always sliding scale of historical fiction,” Mallon writes, reprising a declaration he made regarding Watergate, his previous book. “The text contains deviations from fact that some readers will regard as unpardonable and others will deem unworthy of notice. But this remains a work of fiction, not history.”

Let that be a warning to those who, having lived through the Reykjavík nuclear-arms summit and the Iran-Contra scandal, might seek in Finale yet one more reason to worship the fortieth president—or to indict him. Such revelations, one way or another, just aren’t there. But then, neither is the man himself, or not really anyway: Mallon’s Reagan is like a vaporous planet that comes only periodically into view, its existence proven mostly by the moons in its orbit. This obscure quality, this personal blankness, has the effect of making both Reagan the character and Reagan the person a sympathetic figure. Perhaps it wasn’t so easy after all to be the screen onto which so many people projected their hopes, fears, and crackpot visions of America’s role in the world.

Many such people find their way into the pages of Finale; the novel’s dramatis personae comprise a 1980s Who’s Who of politicians and political advisers, mothballed Hollywood B-listers, and partying party donors. Some have cameos, some get extended speaking roles, and most will be recognizable to anyone who was paying attention back then. Do you recall, for instance, Joan Quigley—Nancy Reagan’s astrologer, whose readings influenced such critical diplomatic efforts as the Iceland summit with Mikhail Gorbachev? Such strangeness at the pinnacle of power makes for material that one imagines few novelists could improve upon.

Yet Mallon does—and in a highly entertaining manner, by putting readers in the heads of his numerous historical players. It’s great fun being privy to the thoughts of the exiled Richard Nixon as he watches the 1976 Republican convention on TV; of journalist Christopher Hitchens (Mallon’s friend in real life) as he skewers Georgetown socialite and Democratic fund-raiser Pamela Harriman; of Jimmy Carter as he attempts to persuade someone, anyone, that his accomplishments as president deserve as much recognition as his failures. These inner musings, diverting in themselves, also fill in the novel’s political timeline. Nixon’s bolt of insight on that night in August 1976, his recognition that Reagan would soon return to glorious political life (“This blankly genial, overappreciated son-of-bitch...was heading not for a pasture but a short stretch of wilderness, on the other side of which lay something vast”), hints at the weird disbelief many will feel four years later. In working as a novelist, and not a historian, Mallon turns these real-life figures into characters whose interactions dramatically push the narrative to its peak.

Historical fiction needs good fictitious characters, as well, and Mallon serves them up—like Anders Little, a thirty-something deputy director in defense programs and arms control at the National Security Council. An earnest true believer whose mentor is the hawkish former U.N. ambassador Jeanne Kirkpatrick, and whose network includes Nixon along with a number of behind-the-scenes Beltway players, Little exists in close connection with the real-life events unfolding in 1986. It’s through his eyes that we get glimpses of Fawn Hall and Oliver North of Iran-Contra fame, of George Schultz and Donald Regan, and of the tense negotiations between Reagan and Gorbachev in Iceland.

But Little is no mere eyewitness or proxy for the reader; rather he’s a flesh-and-blood character whose sneaking suspicions about the administration trigger disillusionment and a reckoning over his own purpose and identity. As the events unfold, he is often paired with the fictional Anne Macmurray, a character brought back from Mallon’s 1997 novel, Dewey Defeats Truman. Now an antinuclear activist, she emerges as a sort of mother figure to the searching Little, though it’s further testament to Mallon’s fiction-writer instincts that he limns their relationship with something more deeply mysterious.

If one character dominates Finale, it might be Nancy Reagan, whom Mallon has Pat Nixon acidly describe as “a Fabergé egg that talks.” Talk she does, and not only about just saying “no” to drugs. We also hear the First Lady plot, ruminate, and brood, an anxious inner cataloguing of the plans and fears she has for her “Ronnie.” Mallon illustrates how the assassination attempt in 1981 would explain her dread, without minimizing the dangerous absurdity of her consulting astrological charts to keep her husband safe—or even, as the winds of the illegal Iran-Contra arms deal began to swirl, to help him decide whom he should fire.

Throughout, the personal mystery of Reagan remains, and many of the characters in Finale acknowledge the famous difficulty of truly knowing or understanding him. “There was no agreement even as to what instrument was required to read him, a microscope or a telescope,” Anders Little thinks. Nancy Reagan is no less mystified, admitting to herself that “she didn’t know who he was, and she never had.” Finale, Mallon reminds us, is a fiction. Perhaps that’s an appropriate treatment for its elusive subject, the real-life star of a much grander fiction.