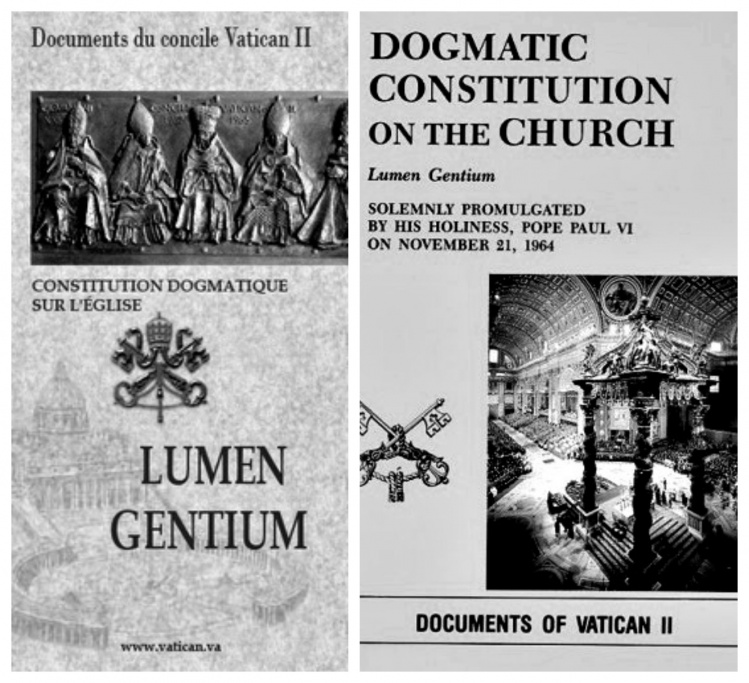 Tomorrow will be the fiftieth anniversary of the promulgation of Lumen gentium, Vatican II’s Dogmatic Constitution on the Church, which by some standards can be said to be the most important document issued by the Council.

Everyone expected that the Council would attempt to redress the imbalance in ecclesiology caused by the premature closing of the First Vatican Council which prevented that body from issuing the full statement on the Church that had been planned. The only document produced on the Church defined the supreme jurisdictional primacy of the pope and the infallibility of certain exercises of his teaching role. This restricted focus guaranteed that subsequent ecclesiology would be skewed, and it contributed to what Fr. Yves Congar called “the incredible inflation” of the papal teaching role. Vatican II, it was hoped, would redress the balance, particularly by rehabilitating the role of bishops as something more than “legates of the pope.”

One of the most important aims of the Council, illustrated in almost all of those debates, was to recover the word “Church” from its identification with the hierarchy (ecclesiology reduced to “hierarchology,” as Fr. Congar called it) and to make it apply to the whole body of believers. Thus Lumen gentium begins with two chapters devoted to the entire Church before it moves to a discussion of various groups within the Church (hierarchy, laity, religious), while the common call to holiness is treated before the religious life. The first two chapters, divided in two lest a single chapter be too long, discuss the mystery of the Church in the great ark of the divine plan of salvation, from creation to eschatological fulfilment, and then turns to the mystery of the Church as realized in the life and work of the People of God between Ascension and Parousia.

Not all of the issues that surfaced in the conciliar deliberations were settled definitively by the Council. In some cases, the bishops were content simply to state the elements that need to be taken into account in any integral and adequate ecclesiology, leaving a fuller resolution of tensions to later theological clarification and canonical determination. I must say that on many of them not a great deal of progress has been made; in fact, there has even been a tendency to regard the statements of Vatican II as if they were definitive solutions and also selectively to champion one set of elements and to ignore the other or others.

Lumen gentium, of course, was not the only conciliar text on the Church; Karl Rahner, in fact, said that he thought all sixteen of the documents had to do with the Church. Among the more important of the other texts were the Decree on Ecumenism, promulgated the same day as Lumen gentium, the Decree on the Church’s Missionary Activity, which some commentators regard as expressing the most mature ecclesiology of the Council, after the “apprenticeship” the bishops underwent, and the Pastoral Constitution on the Church in Today’s World. I have published two articles on the ecclesiology of Vatican II, which can be found here.

I was a curate at St. Bartholomew’s Church in Yonkers, N.Y., when Lumen gentium was promulgated. Knowing a good deal about the pre-history of ecclesiology and the debates that marked the document’s journey, I was eager to have it read and discussed by the members of a reading group of lay couples that met once a month. I was very disappointed when their reaction was one of boredom. They didn’t share my enthusiasm; they found it dull. When, decades later, I encountered that reaction among my students, undergraduate and graduate, I would remind them that to some degree they reacted in this way because they were the children of the Council and took for granted habits of thought and activity that Vatican II had struggled to legitimize and to spread throughout the Church.

I would not be surprised that many readers might feel the same way about Lumen gentium today, fifty years later. But even though no one should expect that it will address or illumine all questions about the life and work of the Church today, I think it is worth a reading, or re-reading, and a moment of grateful prayer would be in order to God and to the popes and bishops of Vatican II.

Agony in the night