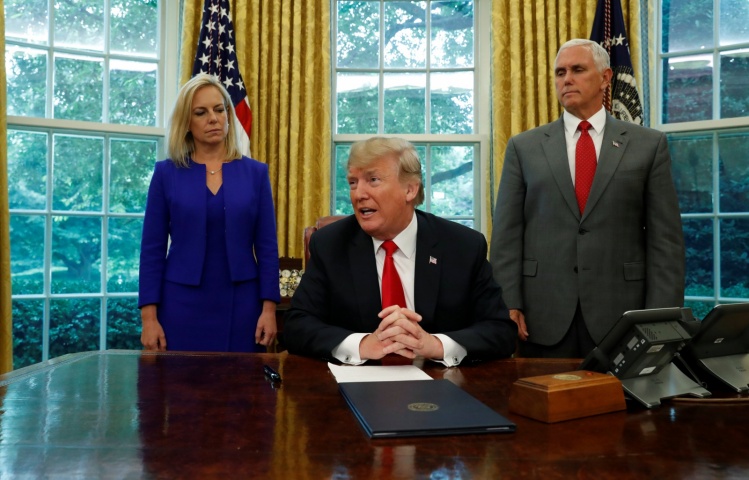 Kirstjen Nielsen assured a congressional committee shortly before Christmas that Jesus, Mary, and Joseph would be eligible for asylum in the United States if they were fleeing from King Herod today. Her remark on the Holy Family headlined news coverage of the December 20 House Judiciary Committee hearing during which Rep. Luis Gutierrez, a Chicago Democrat, told her that the Trump administration would have consigned the child Jesus to Herod’s henchmen. “Thank God there wasn’t an administration like this or he would have perished,” Gutierrez declared. “Maybe I haven’t gone a lot to Bible school, but I know that part.”

Then the congressman walked off before Nielsen, Secretary of the Department of Homeland Security, could respond to his monologue. Under more friendly questioning later on, she evidently applied the immigration law’s “credible fear” standard to the Holy Family’s imagined asylum request. Nielsen determined that there was indeed reason to fear persecution from Herod who, according to the Gospel of Matthew, had ordered the slaying of all boys two years and under in Bethlehem.

It does seem an open and shut case in favor of asylum, given the political nature of Herod’s persecution of the holy innocents of Bethlehem: a pogrom aimed at eliminating the “newborn king of the Jews,” as three visitors from the East fatefully put it when they met the paranoid seventy-something monarch.

Like any other asylum applicants, the Holy Family would almost inevitably have been imprisoned.
sharetweet

Herod the Great was a master builder who had dallied with Cleopatra, Antony, and Octavius in his better days. But he was also the proverbial bully who was really a coward—he had an elaborate network of spies to protect himself, and he would go about in disguise to see what was being said about him, according to the Anchor Bible Dictionary. He forbade public assemblies so that groups couldn’t gather against him. By the time Jesus was born, he was an old man unraveling in the way that bullies often do—consumed by his own fear. His dissolution had begun when, awash in passion and jealousy, he ordered the execution of his beloved wife Mariamme. Scripture scholars tell us that the infancy narratives of the Gospel can be read more as stories that communicate theological truths rather than as history, but either way, Herod was capable of the massacre attributed to him in Matthew 2:16–18.

I am not as sure as Nielsen is that Jesus, Mary, and Joseph would have found an open door at U.S. border, especially if they arrived via Mexico. Nielsen more or less acknowledged this at another point in the Judiciary Committee hearing when Rep. Jerrold Nadler, a New York Democrat who now chairs the panel, asked her if it was true that anyone seeking asylum nowadays could expect to spend years in detention before a decision was made.

“It takes years now because the numbers [of cases] are so substantially higher,” she said.

What Nielsen didn’t say, though, is that under the Trump administration, it has become far more likely that asylum applicants will wait out their requests behind bars—even those who have persuaded asylum officers in an initial interview that they have “credible fear” of persecution at home. A lawsuit focusing on five offices of U.S. Immigration and Customs Enforcement—Los Angeles, El Paso, Detroit, Newark, and Philadelphia—noted that the share of paroles granted to those found to have “credible fear” of persecution dropped from 92 percent between 2011 and 2013 to under 4 percent in 2017.

“The numbers here are irrefutable,” Judge James Boasberg of the U.S. District Court in Washington, D.C.  wrote in granting a preliminary injunction in favor of the plaintiffs, nine people who were waiting in prison for an asylum ruling even after demonstrating that they had fled persecution. The judge said ICE was not abiding by its own procedures: “To mandate that ICE provide these baseline procedures to those entering our country—individuals who have often fled violence and persecution to seek safety on our shores—is no great judicial leap.”

The Justice Department is continuing to defend the case, albeit with a delay because the federal government has no money to pay its lawyers.

It’s possible that if Joseph and Mary had sought asylum in the United States at El Paso between February and September of 2017, they would have quickly passed their “credible fear” review and been allowed to enter the country pending further hearings. Or, like all 349 parole applicants during that period, they would have been denied.

Yes, like any other asylum applicants, the Holy Family would almost inevitably have been imprisoned.