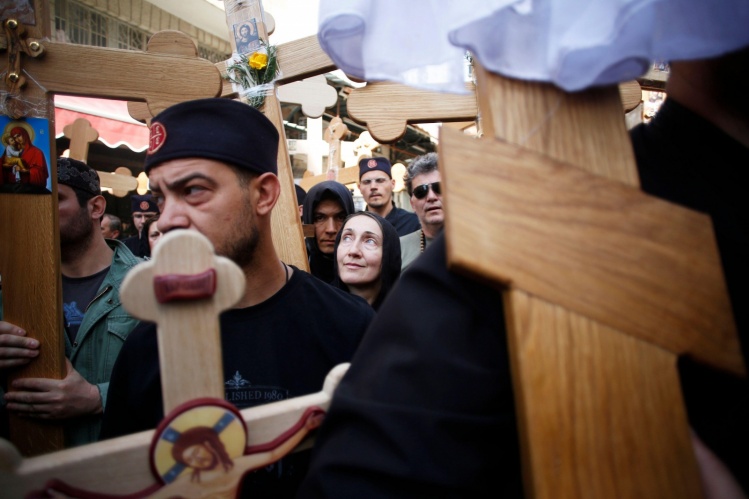 Orthodox Christians from Bosnia before a Good Friday procession in Jerusalem’s Old City, May 3, 2013 (REUTERS/Baz Ratner)

In The Politics of Persecution, Mitri Raheb, a Lutheran Palestinian pastor from Bethlehem, makes clear the aim of his thought-provoking book: “Evangelical Christians and Western political forces want to frame the story of Middle Eastern Christians as one simply of persecution. This study clearly demonstrates that the story is one of struggle, resistance, social involvement and resilience.” This is the writing of a supposed victim—according to the categories too often imposed by outside observers—who rejects the category of victimhood, insisting that he and his community are resilient actors in the events that unfold in the Middle East today. Raheb is not only a pastor but also the founder of the Diyar Consortium, a group of ecumenically oriented educational and social institutions serving the Bethlehem area. He was elected in 2018 to the Palestinian National Council, which serves as a kind of parliament that represents all Palestinians inside and outside Palestine.

Raheb gives an insider’s perspective on Middle Eastern Christians that provides historical context, contemporary analysis, and critical reflection standing in sharp contrast to much of the discourse on Middle Eastern Christians heard in the West. Raheb uncovers the genealogy of much of that discourse, which describes Christians as victims and Muslims as persecutors. As Raheb shows, this way of speaking developed in the wake of the European intervention in the countries of the Ottoman Empire and is intimately tied to European involvement in the region. Raheb convincingly demonstrates how European powers used discourse about Christian persecution to further their own interests, a prefiguring of the discourse and practice of right-wing politicians in the United States in our own time.

At the outset, Raheb points out that “Middle Eastern Christians have often been orientalized, victimized and minoritized.” He seeks to move the focus from persecution to the resilience, resistance, and creativity of Christian communities, which are committed both to their heritage and their homeland. European powers, and later the United States, have presented themselves as protectors of the minorities in the Middle East, which justified their interference in the affairs of the region. Raheb admits that at least some Middle Eastern Christians, including ecclesiastical leaders, welcomed this interference and the privileges it brought them. But his narrative reveals that their enthusiastic embrace of Western involvement was shortsighted.

Raheb shows that the Europeans brought not only modernization, education, and a renaissance of Arabic culture—indeed a blessing for the region—but also Zionism, European-style nationalism, and colonialism, planting the seeds of the ongoing conflicts that have torn the region apart in recent decades. Christian mission schools, set up by various Western Christian denominations throughout the Middle East, educated but also alienated as they instilled an allegiance to the culture and patria of the missionaries, further igniting sectarianism and thus weakening social cohesion. Until the nineteenth century, Islam had “provided the backbone, the glue” that kept the multicultural, pluri-religious Ottoman Empire together. Although non-Muslims did not have equality, they functioned within a flexible and pragmatic administrative structure which provided a large degree of stability and continuity as well as opportunities for prosperity. With the arrival of the European diplomats, merchants, and missionaries, this system was increasingly strained. The European powers imposed themselves as spokespeople for the various minorities, promoting their rights and offering them protection. The prosperity and privileges of these protégés provoked fears among Muslims and their traditional leaders that their lands were being transformed without their control or consent.

The resulting fragmentation weakened Middle Eastern society. The new order emphasized denominational distinctions between Christian communities in the region (Latins and Protestants), which furthered Christian disunity. But, even more important, it further separated Muslims, Christians, Jews, and other religious sects. Raheb attributes great significance to the 1860 massacres of Christians by Druze in Mount Lebanon, a watershed in the history of intercommunal relations. In the reports diffused in the West by a British diplomat, the Orient was depicted as barbaric: “Islamic, irrational, anti-Christian, and stuck in a primitive mindset.” These massacres seemed to prove that Christians in the region needed special protection, and proffering that protection became a way for the European powers to impose their influence on the region.

The author valiantly attempts to summarize the complex history of how European involvement in the Middle East affected Christians there. He covers the collapse of the Ottoman Empire in the aftermath of World War I, the carving up of the region by the French and the British, the promotion of the Zionist movement by the British, and the mass migrations of European Jews to Palestine. In this period, Christians and Muslims underlined their shared Arab identity to promote identification with developing Arab nationalism. In the aftermath of World War II, the establishment of the state of Israel led to further destabilization, and the Arab regimes fell one after another; the question of Palestine’s status has festered ever since. Arab nationalism produced regimes that were overwhelmingly totalitarian, and many chose to make their homes elsewhere, leading to the mass emigration of Jews and Christians. These regimes often presented themselves as protectors of “minorities,” a position they used to legitimize their rule and to excuse brutality toward opposition, especially from Islamic movements that challenged them.

Too many Western political commentators seem to prefer a discourse that is stark and apocalyptic, ready to bury the Christian presence here and now.
sharetweet

In the last decades of the twentieth century, the riches raked in from vast oil wealth were ultimately squandered in the wars that have plagued the region. The Middle East was torn asunder in the fighting between Sunni and Shia Muslims, and in the violence resulting from U.S. involvement in the region, almost always done in close collaboration with the Israeli government. Raheb points out that these petrodollars “were used to destroy three ancient civilizations and to displace millions of ordinary people, including nearly two million Christians.” Furthermore, he argues that Christians were not the prime target of supposed Muslim aggression and persecution, but rather the casualties of violence that pitted Muslims against Muslims, often manipulated by forces outside the region: “In the past three decades, Middle Eastern Christians were not active players or the direct targets of oppression, but they paid collateral damage for an intra-Muslim sectarian divide, conflicts over oil, and a hawkish U.S. neoconservative policy.”

The concept of persecution has been a tool of public diplomacy and international politics. The pattern throughout is clear: Christians of the Middle East are victims of Islamic persecution. This discourse is part of an orientalist perception that persists in framing the Middle East as a backward, barbaric and intolerant region with long-standing sectarian conflicts: between Christians and Muslims, between Arabs and Jews, and between Sunni and Shia. The fact that the Middle East has, for more than nineteen centuries, been one of the most diverse regions in the world—religiously. ethnically and culturally—is ignored.... All these religious sects and ethnicities were able to coexist, not without challenges, but it was possible for the past fourteen hundred years within the framework of Islam. In most cases, albeit with a few exceptions, Middle Eastern Islam proved tolerant towards Christians even if it stopped short of granting them full equality.

Raheb’s book is one in a long series of attempts by educated and activist Christians to influence the discourse about their communities in the Middle East. There is a profound sense of frustration that Western policy makers (and the journalists they rely on) are not listening. Headlines scream that “Middle Eastern Christians are disappearing” or “Christians are being driven out,” and wonder about the future of “the cradle of Christianity without Christians.” Those working constantly, courageously, and insistently to make sure that Christian communities in the Middle East remain vibrant oases of life, faith, and hope resist this gloom-and-doom discourse. This frustration is a resounding chord throughout this book. Instead of reflecting on the surprising vibrancy of Christian life in the Middle East or the resilience and creativity of these communities in the face of difficulties, too many Western political commentators seem to prefer a discourse that is stark and apocalyptic, ready to bury the Christian presence here and now. Raheb does not deny that challenges and threats exist, but he recognizes that a discourse of despair and resignation risks becoming a self-fulfilling prophecy.

In “Pray for Peace in Jerusalem,” his pastoral letter to the Christian faithful in the Holy Land, Emeritus Latin Patriarch of Jerusalem Michel Sabbah wrote, “Your first duty is to be equal to the situation. However complicated or difficult it is, you should try to understand it. Take all the facts into account. Consider them objectively, calmly but courageously, and resist any temptation to fear and despair.” Any discussion of the situation of Christians in the Middle East must take seriously the fear that has gripped many Christians in the light of the events of recent decades. However, fear is a bad teacher. A first consequence of fear is the tendency toward isolation, withdrawal, and migration. Today, Christians often isolate themselves in their own neighborhoods, institutions, and clubs, and aspire to migrate. Overcoming fear takes Christians out of their self-imposed ghettos to encounter all those within their society who are similarly threatened by the monolithic totalitarian, religious, or ethnocentric visions that threaten the very composition of Middle Eastern society.

One particularly vibrant response to the reality of the Middle East today are the hundreds of Christian schools, universities, hospitals, orphanages, homes for the elderly and the handicapped, and other institutions spread across the region that offer social and educational services. They are characterized by their devoted service to the societies in which they were established and by their openness to one and all. These institutions reveal the face of a Christian presence that seeks to serve not only Christians but the society at large. They represent a very important Christian outreach beyond the hold of fear and isolation. It is through these institutions that Christians can and do leave their mark on society.

Christian institutions at the service of the entire population go hand in hand with the development of an appropriate Christian discourse about the world in which Christians live. Raheb’s book is an excellent contribution to this. It is this discourse that must also distinguish the Christian as a voice for justice, peace, pardon, reconciliation, and selfless love. Fear often provokes the development of a discourse that is reactive and insular, closing Christians off from their neighbors. Those who stay in their ancestral homelands are not the only ones who inspire others by their courage, determination, and faith. There are also those who, like Mitri Raheb, contribute to a conversation that recognizes and strengthens the Christian vocation to be a leaven in society. Their voices need to be heard.

David Neuhaus, SJ, is the superior of the Jesuit community in the Holy Land.