Should We Hear Their Stories?
By Paul Baumann
Sexual-abuse Crisis
U.S. Catholicism
Priesthood 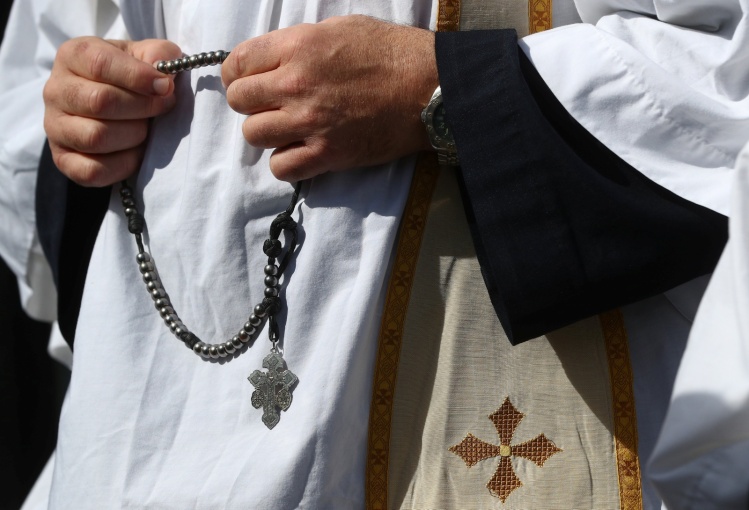 A priest holds a rosary outside the Pastoral Congress at the World Meeting of Families in Dublin. (CNS photo/Hannah McKay, Reuters)

Speaking about the church’s sex-abuse scandal at a September conference on the “Catholic Imagination” at Loyola University in Chicago, the essayist Richard Rodriguez said a very brave thing. “What do we know about these priests? We know nothing about the burden of these fallen priests,” Rodriguez said, according to articles in the National Catholic Reporter. “We don’t know their stories. What do they think they were doing?…. We have no idea who they were, or what they suffered…. Our imaginations have gone dull.”

Evidently Rodriguez’s remarks were prompted to some extent by the 2016 death of his friend, the Notre Dame theologian Virgilio Elizondo. Elizondo had been accused of abusing a minor, and appears to have committed suicide. He had denied the charges.

Rodriguez was criticized by some for showing concern and even sympathy for priests most people regard as monsters deserving nothing but condemnation and social oblivion. Such priests, and the bishops who hid their crimes, remain exhibit Number 1 in the case against a corrupt, hopelessly patriarchal, and arrogant institution. Who, after all, wants to be seen expressing interest in such people, let alone offering them comfort? Doesn’t doing so just retraumatize victims?

The wishes, well-being, and confidentiality of victims need to be placed first and foremost. But does that mean we have nothing to learn from the offending priests about the causes and consequences of the crisis? Criticism of Rodriguez seems misplaced to me. It took real courage for Jason Berry to break the sexual-abuse story in Louisiana in 1985. Early on, Thomas Doyle, OP, showed the same fearless determination in demanding that the hierarchy stop turning a blind eye to the victims and the crisis. In 2002, the Boston Globe took risks in exposing the grotesque failure of Cardinal Bernard Law and the Boston archdiocese. But at this late date, simply damning the church is too easy, especially in light of the well-documented steps the church has since taken to protect children. Rodriguez makes an important point. Is it possible to understand the sexual abuse if the stories of priest-abusers are regarded as untouchable and irrelevant? Will such ignorance help us prevent future abuse? Don’t journalists have an obligation to pursue such stories, no matter how unpalatable?

If we allow disgust to keep us from hearing such stories, we are protecting no one but ourselves.
sharetweet

What Rodriguez appears to be calling for on an imaginative level is no different from what Truman Capote accomplished by writing In Cold Blood. In order to make some sense of the brutal and seemingly motiveless murders of the Clutter family, Capote had to show who the murderers were. He didn’t diminish their culpability or the horror of the crime; he painted a broader and deeper picture of the tragic collision between two different sides of 1950s American life, each largely and tragically ignorant of the other.

Andrew O’Hagan does something similar in Be Near Me, a novel about a priest who violates sexual boundaries with an adolescent. O’Hagan complicates, but doesn’t absolve his protagonist’s actions. As Hilary Mantel wrote in her review in the Guardian, Be Near Me “is a nuanced, intense and complex treatment of a sad and simple story. Read it twice.”

Earlier this year, I received an email from a priest who has long been confined to restricted ministry because of his sexual abuse of a minor. He and some priest colleagues have been trying to launch a project that would complicate what he calls the “dominant narrative” of the clergy-abuse story. I told him that in the current climate he was not going to have much luck on that score. Some aspects of what he was proposing seemed morally evasive—for example, describing pedophilia as a “public-health problem.” But he was right to insist that the actions of Catholic priests cannot be understood without taking into account the much larger societal problem of sexual abuse. No institution that deals with adolescents and children is immune, and there is little evidence that the Catholic Church was worse than other organizations in this regard. Unfortunately, there is also no evidence that it was any better.

My email correspondent’s proposal relied on the often-neglected John Jay reports commissioned by the bishops. “What do the reports tell us about the psychological states of the offending clergy, their seminary formation, their understanding of their offenses, and the contextual causes of their offending?” he writes. “Did offenses result more from ignorance and weakness or from clerical power and arrogance…. What do we have to learn from listening to the offenders themselves?” Research into the harms done to victims, he notes, did not begin until the late 1970s. Did most abusers have an understanding of the damage they were doing? Paraphrasing the John Jay reports, he writes, “The abusive clergy were in many ways adolescents themselves, and most of their offenses consisted of fumbling efforts at intimacy.” Most abusers were not serial predators: more than half of them were alleged to have had one victim.

As Peter Steinfels has written, the John Jay reports raise serious questions about what my correspondent called the “dominant narrative,” which casts the typical offender as a serial rapist who acted out of power and arrogance. I have some personal knowledge of two priests accused of sexual abuse. One was a friend from graduate school. Accused, he readily confessed to having abused an adolescent boy and was eventually laicized. What did he think he was doing? My few attempts to contact him over the past seventeen years have been futile. Though he was in his twenties when the abuse occurred, my sense is that in many ways he was an adolescent himself, psychologically immature and sexually confused. It seems possible that he acted out of weakness, ignorance, and misplaced affection. But that is speculation on my part. It would be helpful to hear his story.

The other case concerns a deceased priest who was in all likelihood motivated by power and arrogance. But I can’t be sure. As Richard Rodriguez urges, it would be good to know more about both stories, provided of course that the privacy of victims is protected. If we allow disgust to keep us from hearing such stories, we are protecting no one but ourselves.