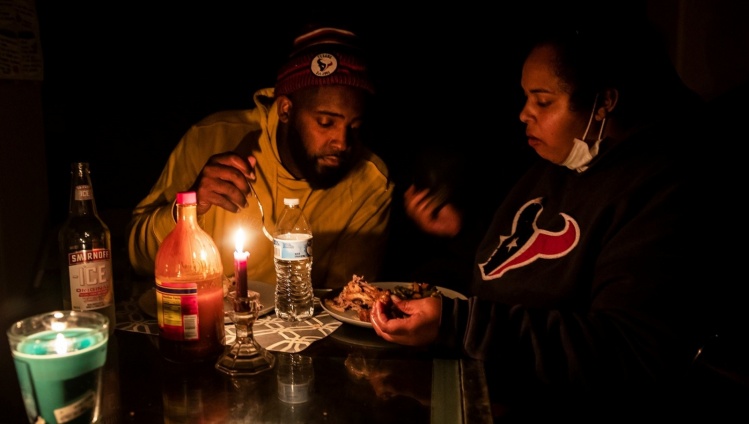 Eating dinner by candlelight in Hutto, Texas, during a power outage caused by a winter storm (CNS photo/Ricardo B. Brazziell, American-Statesman, USA Today Network via Reuters)

Soon after the power went out early Monday morning of last week, and the temperature inside my Dallas home dropped below 50 degrees, I started thinking about Henry David Thoreau.

In Walden, the neck-bearded author’s account of his “experiment” living in a cabin in the woods, Thoreau writes that “the grand necessity, then, for our bodies, is to keep warm, to keep the vital heat in us.” Everything else we do, whether observing wildlife, sounding the depths of a pond, or taking another Zoom call, depends on bodily warmth. And I was freezing. The things I relied upon to maintain my vital heat, from the electric grid to my uninsulated house, were failing.

The massive power and water outages in my state stemmed from a breakdown of reliability. It’s tempting to respond by striving for greater self-sufficiency, just as Thoreau sought to survive “by the labor of my hands only.” Laudable as his attempt was, he couldn’t really do it. And neither can Texans—or Texas. Thoreau’s life is a lesson not in self-reliance, but in discerning whom and what to rely on, whether you’re one person or a state of 29 million.

Thoreau may seem like an unlikely guide to living in Texas. He vehemently opposed the Mexican-American War (1846–48) that kept the fledgling Lone Star State in the union. He was a radical abolitionist at a time when nearly a third of the population of Texas was enslaved. And he complained in Walden that the country was “in great haste to construct a magnetic telegraph from Maine to Texas; but Maine and Texas, it may be, have nothing important to communicate.”

Despite this, Thoreau’s spirit of independence actually does reflect Texans’ self-mythology. Texans are proud of their state’s brief history as an independent republic. Talk of secession still comes up in our lunatic politics. And as we now know all too well, Texas has its own electrical grid, barely connected to the rest of the continent.

The Texan vision of self-reliance too often turns cruel. Texans mocked the country’s dependence on their petroleum during the mid-1970s push for a national 55 mph speed limit by applying bumper stickers to their cars that read, “Drive 80, Freeze a Yankee.” (So maybe Thoreau was right about the telegraphs.) Last week, the now-former mayor of a small city in West Texas posted on Facebook that families without power needed to “sink or swim.” He wrote, “It’s your choice! The City and County, along with power providers or any other service owes you NOTHING.”

Of course, the power companies and grid managers really do owe us something. We rely on them, and because they weren’t ready for temperatures near zero degrees Fahrenheit, they defaulted. Reliant, the company from which I purchase my electricity on the deregulated energy market, was not true to its name. Neither was the Electric Reliability Commission of Texas, which controls the state’s power grid. I didn’t even know ERCOT existed until this week. Its failure underscores our total dependence on a fragile energy infrastructure we barely notice in ordinary times.

It’s wrong to think wisdom consists in cutting oneself off from others in a fantasy of independence.
sharetweet

Thoreau criticized early industrial society for making us ever more dependent on technology and exploitative trade. Americans in the mid-nineteenth century, he claimed, “have become the tools of their tools.” What’s worse, they relied on subjugated laborers: the poor, immigrants, and slaves. None of them had a fair chance to realize their human potential. “Life’s finer fruits cannot be plucked by them,” Thoreau wrote. “Their fingers, from excessive toil, are too clumsy and tremble too much for that.” If each of us relied on ourselves more, he argued, we would need other people to labor less, and all of us would enjoy greater freedom.

Critics like to point out that Thoreau wasn’t as independent in the woods as he makes himself out to be in Walden. He built his cabin on Emerson’s land. He frequently went into Concord and ate at his family home. His mother and sisters did his laundry. He complained about the post office, but used it to correspond with many close friends.

None of this negates Walden’s social critique. Rather, it shows how we don’t really have to cut our ties to other people to resist the forces of dehumanization. We have to manage our reliance on others, not end it. Thoreau was suggesting that you break your addiction to coffee and tobacco to help end slavery, but still visit your mother. Economize so you don’t have to sell your labor, but spend your time wildly with those you love.

I was able to warm up because my wife and I were taken in by good friends who, by some inscrutable stroke of fortune, never lost power. We spent two nights at their house, eating, drinking, and playing games to keep our minds off our possibly frozen plumbing. While COVID-19 remains rampant, it’s risky to stay under one roof with people from a different household. But we trusted that these friends had been careful in avoiding the pandemic, and they trusted us. We knew they were reliable.

Thoreau thought the mark of a philosopher was the ability to “maintain his vital heat by better methods than other men.” He was right about the value of practical wisdom. But it’s wrong to think wisdom consists of cutting oneself off from others in a fantasy of independence. There are more ways to be a philosopher than sitting atop a lonely mountain.

A philosopher ought to know when to rely on public entities, on strangers, on friends, on oneself. A philosopher can judge who is reliable and who is not and can strengthen indispensable relationships. Friends will let you down from time to time, and even the most stalwart do not normally have the ability to generate electricity. We need power companies, which means we ought to insist they become more reliable even as we work not to lean on them so heavily. Texas needs the other forty-nine states, even as it needs to get better at maintaining its own infrastructure and educating and protecting its residents.

“Some of my friends spoke as if I was coming to the woods on purpose to freeze myself,” Thoreau writes in Walden. Many nevertheless paid him a visit, with one staying with him in the tiny cabin for two weeks. Thoreau could build a fire on his own, but even he knew that a real housewarming required guests.

Jonathan Malesic is a writer living in Dallas. His book on burnout will be published this year by University of California Press.