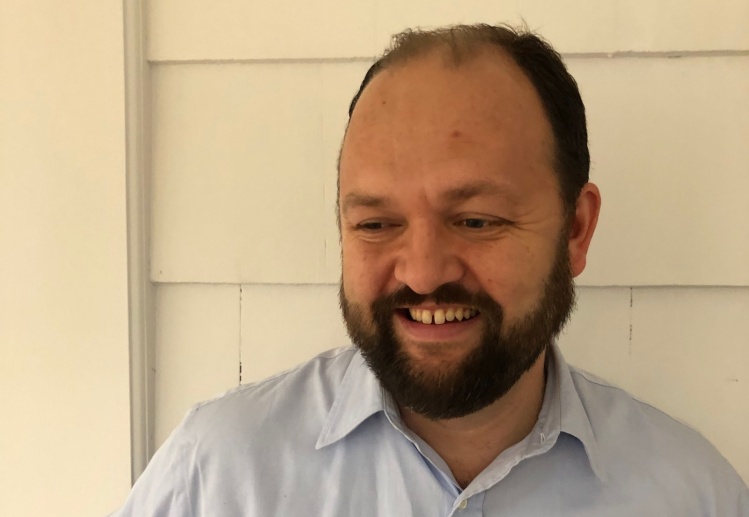 Ixodes scapularis, the common deer tick, is the size of the head of a pin. A million angels might be able to dance upon it, yet it is likely too small for your eyes to see.

When one of those pinhead-sized creatures bit into his skin, Ross Douthat seemed to have all the protections that this world can offer. He had a loving family, a roomy home, a “dream job.” He had connections and influence; as a Harvard graduate who had become the youngest regular opinion columnist in New York Times history, Douthat could make himself heard at the highest echelons of power. He had health insurance. He had doctors. On top of all that, Ross Douthat had faith: a serious, considered, engaged faith rooted in Catholic teaching and practice.

In confronting mortality and the hardships of human existence, Douthat had, as he told a group of students in 2016, “more to draw on” than many of us do. But Douthat did not recognize that tick on his skin. And then medical authorities refused to recognize his illness.

Douthat ended up with the chronic form of Lyme disease. To those of us who have lived in the mid-Atlantic, pulling ticks off our ankles all summer long, chronic Lyme is a known threat. We all know someone, or know someone who knows someone, who has had it. (My own childhood best friend lost over a year and a half of his early twenties to chronic Lyme.) Chronic Lyme is agonizing, so much so that even reading about Douthat’s physical pain—which he marshals all his writerly talents to describe—makes you want to crawl into bed and hide under the covers.

The CDC, that arbiter of medical legitimacy, does not acknowledge that chronic Lyme disease exists.
sharetweet

But the CDC, that arbiter of medical legitimacy, does not acknowledge that chronic Lyme disease exists. The CDC website does mention something it calls “Post-Treatment Lyme Disease Syndrome.” It basically describes the syndrome this way: some people get treated for Lyme but still feel terrible, months or years later. It is too bad for those people. They are—see the syndrome’s name—“post-treatment.”

For sufferers of chronic Lyme, this means that most doctors will not help you try to ease or end your pain—though they might suggest (as they have so often suggested to women reporting chronic health problems like endometriosis) psychiatric care.

What does a rational man do, when others dismiss his “eminently reasonable” accounts of hurt and requests for help? What does a man of faith do, when others seem to be losing faith in him? “I went to Mass and prayed for help,” writes Douthat. “I googled neurologists. I managed to sleep.” Douthat found moments of peace. But he remained in chronic pain, and came to doubt—after multiple, official suggestions that the pain was psychosomatic—his sanity.

Douthat had made a career of words: of saying and writing things that other people took seriously. Sure, people had always disagreed with him. And writers know, more intimately than most of us do, how hard it is to make oneself understood by others. You are always subject to misinterpretation, no matter how clear (in your own mind) your prose. But it is one thing to encounter disagreement or misinterpretation. It is another thing altogether to have your words—your earnest account of what Douthat calls your “enfleshed reality”—denied by the public arbiters of truth. Therein lies a particular form of disorientation and disempowerment, which some people today try to capture with the term “gaslighting.”

Reading The Deep Places, I kept thinking of the signs that have popped up on front lawns in my neighborhood during the COVID-19 pandemic: “In this house, we believe that science is real.” What does that even mean? It’s a profession of faith that seems to smugly gloss over some obvious truths: scientific knowledge, like all human knowledge, is partial. Scientists often disagree. Scientists make mistakes. Science may be “real”—it exists; it is one means by which human beings seek to know—but it is always incomplete, and it is sometimes wrong.

It is one thing to encounter disagreement or misinterpretation. It is another thing altogether to have your words denied by the public arbiters of truth.
sharetweet

It makes me anxious to type that sentence, given the political divisions stoked by the pandemic. (Read: I’m not an anti-vaxxer!) Douthat seems anxious, too, when he reports that going beyond the “medical establishment” was what helped him start to feel better. Key to Douthat’s battle with chronic Lyme was the use of something called a Rife machine, which delivers waves of electromagnetic energy at targeted frequencies. The American Medical Association, however, banned Rife machines decades ago, and most doctors regard Rife treatments as quackery.

Douthat knows it sounds strange. But the world, he reminds us, has always been “stranger than official thinking allow[s].” So, Douthat thinks, we must extend the spirit of scientific inquiry beyond the current medical-establishment consensus: given the “strange reality” of chronic Lyme, and in the absence of a clear way to treat it, we should be more open to “strange experiments”—to pursue a diverse range of treatments and to “embrace the experimental spirit that chronic sickness seems to obviously require.”

That’s the more conventional side of Douthat talking. That’s Douthat, the meritocrat, the successful professional who is proud of his Harvard degree and at home in the chattering class. And that Douthat calls us to expand the scientific project, using scientific terms like “experiment,” in a way that is edgy but not essentially countercultural. It’s the same side of Douthat that claimed the core liberal virtue of “open-mindedness” in a recent New York Times column about the Rife machine. This Douthat reassures us that the problem with our scientific, empirical, liberal order is that we are insufficiently scientific, empirical, and liberal.

I get that side of Douthat. I’m a Gen-X meritocrat, too, who cherishes my position of credentialed legitimacy. And those are pretty convincing arguments, at least to modern liberal ears. But the Ross Douthat I really love, the Ross Douthat who shows up in The Deep Places in a flurry of beautiful, anguished words, is the Ross Douthat who takes us way beyond polite, professional-class conversation. I love the Ross Douthat who sees God in a sand dollar, who fights zombies in his dreams, who quotes Dante and recites mantras, who thinks of his once-Pentecostal mother speaking in tongues, who communes with saints and ancestors—and who hangs on to each of those things, no matter how fantastical, because he knows they hold him together. He knows that those things are real, too.

Alongside his own inclination to adopt the language and spirit of modern, scientific liberalism, Douthat more profoundly understands that some of the bedrock assumptions of modern science and modern liberalism—that we inhabit bounded, individual bodies in a rationally intelligible world—are incomplete. The small bits of mastery that science gives us over our bodies and our world are far eclipsed by the mystery that is everywhere: around us, between us, inside us. To limit ourselves to modern, scientific, liberal paradigms of knowing is to miss so much of the enchantment, the magic, of life.

The written word itself has a kind of magic to it. Words allow us to see, with our eyes, some evidence of things unseen—whether those things be deer ticks or diseases or angels or suffering or faith—in a world where we too often see too little, and too darkly. Thank God that, through all of this, Douthat kept writing.

In the Beginning Was the Word