The Euphoria of the Dying 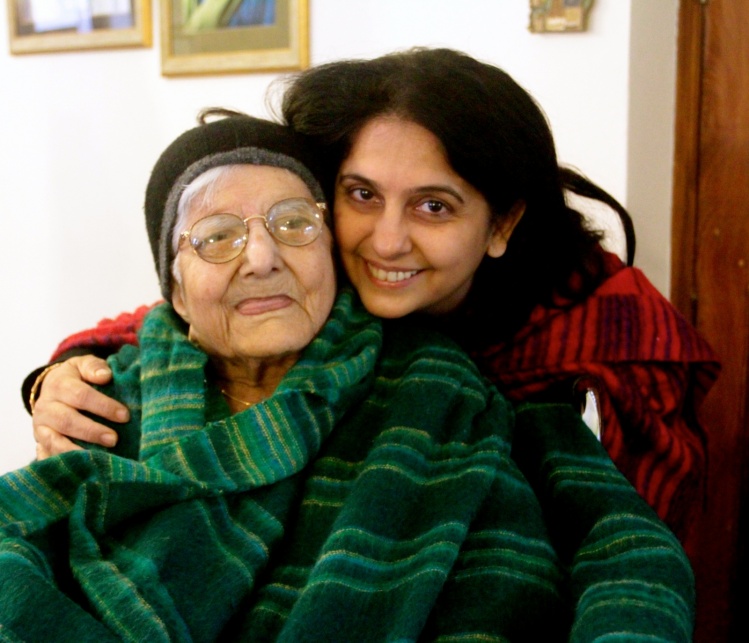 Mummy with her granddaughter the day before she died / Jo McGowan

In the United States we more or less expect that people will die in a hospital. That is quickly becoming the norm here in India too. But my mother-in-law, “Mummy,” wanted to die at home. And when you’re just a few months shy of a hundred years old, you aren’t afraid to say what you want. She told me often in the past few years how ready she was to go. No heroic measures, she said. Nothing invasive. “I don’t want to be a burden,” she insisted. Not wanting to be a burden is at the top of many elderly people’s list. For those who love them, it’s painful to hear. Burden us, we kept telling Mummy, it’s no problem! To her own list, I added one more item: no pain while dying.

But India is a difficult country to die in. It is the world’s largest producer of morphine (the drug of choice to manage pain for the dying), but it exports over 90 percent of it and severely limits its availability here. The law makes morphine so difficult to obtain that most doctors never even bother to apply for the six licenses required to dispense it. Its scarcity means that few doctors know how to administer it.

Fortunately, I was able to acquire a small amount of morphine from a sympathetic doctor. And, again fortunately, I know how to give injections. This made all the difference to our peace of mind. My mother-in-law needed it only at the very end, but knowing that it was there and that she would not suffer needlessly removed the fear of pain, which is almost as bad as pain itself.

From her six weeks of dying, what we remember best are those brief, intense moments of joy
sharetweet

In the last month of her life, Mummy took us by the hand and led us gently into the world of the dying. Slowly, she began to withdraw from the daily life of the house. Where before she had always joined us at the table for meals, she now came out less and less frequently. First, she started having breakfast in bed, then dinner, and finally even lunch. She was too tired, she said, and it was too cold. And, anyway, she was no longer interested in food.

As she ate less, her energy declined. Small ailments became major as her resistance decreased and her weakness grew. I took her to the doctor and the cure for one problem would simply create another. She also began taking in less liquid: even the sight of tea or lemonade made her feel queasy; swallowing a sip of water made her retch. As she went into acute renal failure, I tried helplessly to convince her to drink more. “What will happen if my kidneys shut down? Will I die?” she asked me. I nodded. “That’s what I want,” she whispered. “I’m praying for that every day.”

The family gathered. From all directions—India, England, America—her loved ones came. When her older daughter arrived, something strange happened. Mummy, who had been lying still for hours, suddenly sat bolt upright and said: “Let’s go!” We wheeled her out in front of the Christmas tree and took photos. She smiled and laughed and even composed the photos—“You stand behind me,” she told her granddaughter. “It will look better that way.” We sent the photos to friends and family and begged them to confirm what we thought we were seeing: she was fine! Those making plans to come asked if they should cancel their trip. Maybe we had panicked unnecessarily? Maybe she wasn’t dying?

The “euphoria of the dying” is a recognized phenomenon. A sudden burst of energy, an unexpected surge of interest and vitality—it typically takes the family totally by surprise. My friend Linda, a hospice nurse with years of experience, told us to enjoy it while we could. These precious moments don’t last long.

A few minutes after the photo shoot, Mummy wanted to lie down. She sank into a deep sleep that lasted for several hours. But she woke with another burst of energy. This time she said she wanted to play cards. It was a game to remember. She was alert and attentive, checking the accuracy of the shuffle and the cut, complaining about the dealer and prodding the others to play quickly, as if she were on the clock. Those of us who were watching from the sidelines could only marvel at her passion. We all laughed in wonder and amazement. And then, once again, it was over.

Today, when we look back at her six weeks of dying, what we remember best are those brief, intense moments of joy and excitement when she seemed to come back to life. It was, I believe, her parting gift to us. Yes, there were periods of pain and discomfort and a few lingering anxieties. But the overwhelming memory we all get to keep is the merry, carefree way she asked to take one last tour of the house, posed for a round of photos, and ordered a hand of cards to be dealt. Who could weep at her departure when she had so much fun while going?