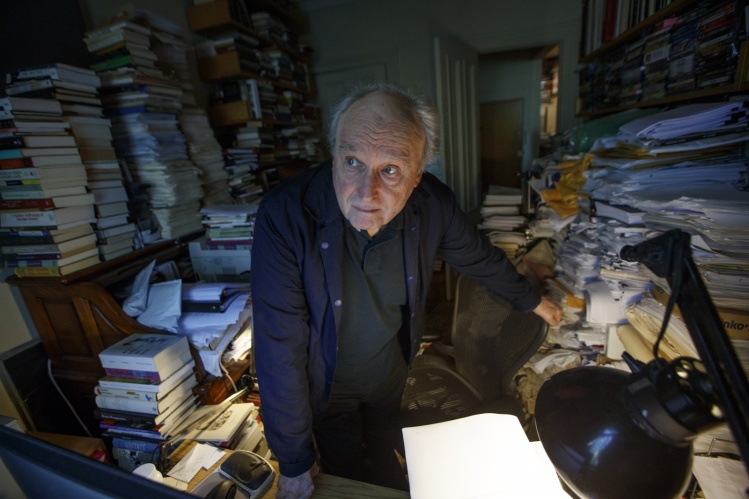 Frank Bidart in his home in Cambridge, Massachusetts, in 2017 (Keith Bedford/The Boston Globe via Getty Images)

Reading Against Silence, the eleventh collection by the American poet Frank Bidart, I was more than once put in mind of some lines from “Legend,” the opening poem of Hart Crane’s White Buildings, a modernist masterpiece from nearly a century ago that also finds its ethic in the recurrence of desire:

It is to be learned—
This cleaving and this burning,
But only by the one who
Spends out himself again.

What brought Crane’s lines to mind, however, was not so much their theme as the two poets’ shared interest in a particular grammatical construction, found in both the “Legend” of Crane’s title (from the Latin legenda: “things to be read”) and in the first line just quoted: “It is to be learned.” In Latin, this is called a gerundive: an adjective derived from a verb that typically expresses necessity or obligation. Its English equivalent is an appropriate construction for a poem in which Crane does not just tell us how his book is to be read, but also—what is much the same thing for him—how one must live.

Both projects for both poets are fraught with the romance of danger: the moth’s prize for pursuing “the still imploring flame” is to be consumed in it. Yet the ordeal is a heroic one, a “legend.” Only in Bidart does the same interest in erotic danger take on a distinctly moral cast—one scarcely concealed by his career-long fascination with figures of conspicuous moral depravity, embodied once and for all in Herbert White, the serial killer whom Bidart made the subject of a dramatic monologue in his 1973 debut collection Golden State. For, as the poet and his protagonists know all too well, necessity licenses everything.

Bidart’s work has long been drawn to the blurry boundary between need and compulsion. This duality is present in his habit—one that he shares with contemporary internet slang—of rendering erotic desire as “thirst.” (Desire and Thirst are titles, respectively, of a 1997 collection and a subsection in Bidart’s Collected Poems.) Thirst for what sustains life and for what intoxicates are not to be distinguished on the basis of their intensity; indeed, the latter often exceeds the former. What is “moral” lacks this compelling force. When one poem’s speaker marvels at “a friend who says / that he has never felt a conflict / between something deeply wished or desired, / and what he thought was ‘moral’…,” the implication seems to be the Blakean one: that the friend’s desire is weak.

“Against Silence” looks out on a present that seems to be compulsively reenacting a past many had assumed was safely behind us.
sharetweet

In Bidart’s latest volume, his first since the publication of Half-light: Collected Poems 1965-2016, these fascinations are given a new and sharply political setting in the poem “The Moral Arc of the Universe Bends Towards Justice”—an axiom of the Rev. Martin Luther King Jr. favored by former President Barack Obama. The poem’s first line declares this to be “an illusion.” The italicized lines that follow begin with a gerundive-like construction: “What had to be built we knew instinctively must be built / without // asking permission of the ignorant doing the building.” Who this “we” is we do not need to be told. The question is, rather, how it and the volume’s other collective speakers—such as the inhabitants of Bidart’s childhood California, who “were born into an amazing experiment” and are left declaring, bitterly, “We are sons of the desert / who cultivate the top half-inch of soil”—are to be understood in relation to the maker of these poems. Bidart’s work has long made use of italics and capitalization for emphasis; in “Moral Arc,” this typographic signature takes on a new complexity. At first, the italics seem to distance the words from the poet, as when the poem gives voice to the oppressor: “But natural / pity / soon ends / when what pity unleashes / is CHAOS, is / horror.” Soon enough, however, a closely related thought appears in Roman type: “If you do not become a master / you are a slave.”

In case we had failed to grasp the poem’s particular historical inflection, its closing lines make explicit the connection to American race-based slavery and the revanchist regime of Jim Crow:

The voice of What had to be built leaves certain
words bodiless. The Lost Cause, strange
Fruit, was lost, for us, in a song about lacerated flesh.

These lines, in turn, prepare for the collection’s most bitter reflection on the rule of ostensible necessity, which is never stronger than in the realm of fear. Like so many other lines in this book, these are haunted by the logic of Thomas Jefferson’s letter to John Holmes on slavery, in which Jefferson declares that “we have the wolf by the ear, and we can neither hold him, nor safely let him go. Justice is in one scale, and self-preservation in the other.” Or, as the poem puts it:

When a master stares at himself in the future
What he fears is that the world will do to him what
he did to the world when he was the world.

Fear as the rationale for subjugation, defense as the motive for offense: these compulsions are as old as Marcus Cato’s declaration in the Roman Senate that “Carthage must be destroyed” (Carthaginem delendam esse), one of the most notorious uses of the gerundive on record, and one that echoes in the 1973 book History, by Bidart’s mentor Robert Lowell. How to escape from this dreadful logic? On this point, Bidart’s new poems are equivocal. Like much art of the Trump era—the shocked liberal response to which it documents—Against Silence looks out, through our many screens, on a present that seems to be compulsively reenacting a past many had assumed was safely behind us. The risk in its attitude is that of fatalism—as if, confronted with the unexpected persistence of past evils, we had no choice but to view them as eternal recurrences.

In fact, the book does imagine an escape from such fatalism, albeit in a poem of considerable abstraction, whose title, “Coda,” warns that it may be located beyond worldly experience. Subtitled “(Neither master / nor slave),” it participates, like several other poems in Bidart’s corpus, in the originally medieval genre of the dream allegory, a genre whose touchstones for Bidart are Dante’s La Vita Nuova and Percy Shelley’s “The Triumph of Life,” to which it adds strong echoes of Plato’s allegory of the cave. Even by those standards, “Coda” is strange:

Think of the earth—matter, the mind’s
ground—as an enormous mirror
across whose impenetrable surface the individual
soul fears that it merely appears and disappears
without weight, another among multitudinous
chimera, without identity or consequence.

This vast reflective surface, evoking the illusions of art and the phenomenal world, is also a vertical wall, a mirroring obstruction. The poem’s climax tells how the soul, coming up against this barrier, reached out a finger and “with its one knife-like / nail // deep as you could // dug into it. Almost in / delirium, you scratched the screen with a jagged scratch.” Such mark-making seems like an emblem for art, albeit one that is hostile to art’s traditional function of mirroring or mimesis. Then again, the “enormous mirror” that the finger scratches no longer reflects the world, but is the world. A few lines later, the poem appears to comment on this act of scratching:

This formulation might seem to reintroduce, in the context of art, that necessity on which Bidart has already cast such a skeptical eye, suspecting that it harbors a complacent belief in either the inevitability of human progress or its inevitable failure. But such complacency is just what the paradox in these four lines means to overcome. What “happened,” the poem implies, was a free act, not to be inferred from what preceded it. And yet, neither is it entirely arbitrary: having happened, it transforms the starting conditions so that it seems to be their logical end. The free act briefly overcomes necessity; but if successful, it, too, will seem necessary in retrospect, making a new kind of sense of all that came before. Still, as imagined here, it remains something cryptic, almost without significance, a scratch.

Against Silence is a collection of poems, not a philosophical treatise; we should no more expect it to adopt a single attitude than we’d expect its author to hold to a single mood. “The Fifth Hour of the Night,” the continuation of a sequence Bidart began in the 1990s, flirts at its close with a Nietzschean affirmation of the sun, revealer of the visible world and multiplier of desires and distinctions. Other poems, no less typical of the book, are more qualified in their affirmations. “Coda” itself ends by imagining not a resolution of its central dilemma, but a means of holding it in suspension: “Mind returns the intolerable in art / as brilliant dream.” The slash mark here is part of the line itself, not a line break. It is the graphic representation of a paradox that obsesses the poet: the seam that is also a crack.

Rilke imagined art’s task as answering the world’s desire to be internalized and remade, “an invisible rearising in us.” Such tenderness feels remote from the spirit that here declares: “We needed to rewrite in revenge the world that wrote us.” Yet the “against” of Bidart’s title is more than just adversarial. Often, in this collection by an eighty-two-year-old poet, the preposition suggests something closer to “beside,” “close up against”—a chilly nearness that can also suggest loving proximity to what lies beyond the grave. The lovely final poem, borrowing from the poet Kaveh Akbar a Farsi phrase meaning “Your place is empty,” imagines a table set for absent friends. The book’s last act is one of supernatural hospitality.

Paul Franz’s criticism and poetry appears in the Nation and the New York Review of Books, among others.