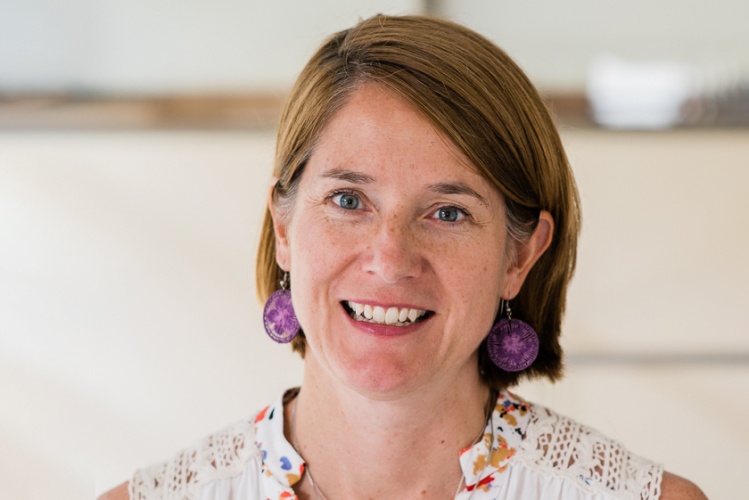 Maureen O’Connell’s new book, Undoing the Knots: Five Generations of American Catholic Anti-Blackness, is a project of unraveling. To frame her task, she cites James Baldwin’s “advice to white people” to “go back where you started, as far back as you can, examine all of it, travel your road again and tell the truth about it.” Over the course of the book, O’Connell retraces her family’s history in the United States, specifically in Catholic Philadelphia, to uncover how her family’s identity as Irish immigrant Catholics became entangled with whiteness and anti-Blackness over the course of centuries, such that her own Catholic identity remains knotted up with racism today.

O’Connell’s examination of her ancestors’ and relatives’ experiences in the United States as white Catholics—as well as her own—leads her to two revelations that extend beyond her family’s history. The first: whiteness is “part of the tradition of American Catholicism.” In other words, what it means to be white and what it means to be Catholic are handed down together from one generation to the next through ritual, practice, and teaching, and American Catholic traditions and rituals can become lessons in learning and performing whiteness.

Identifying as white helped newly arrived Irish Catholics confront anti-Catholic sentiment in the United States. Rather than stand in solidarity with African Americans, who also lived under an Anglo-Saxon culture that was not their own, Irish Catholics “tapped into the rootstock of American anti-Blackness to build immunity to the pathogen of anti-Catholicism.” In the twentieth century, for example, Irish Catholics used minstrel shows to create a racial boundary between themselves and Black Americans. In her research, O’Connell discovers that both her mother and her uncle participated in a Catholic blackface minstrel show, a form of entertainment that was “standard fare” for Irish Catholic families into the 1950s. The practice of blackface minstrelsy cultivated a twisted version of solidarity, connecting white people with each other via shared ridicule of Black people. It is these kinds of traditions that O’Connell wants to scrutinize so that white Catholics can recognize how Catholic traditions and practices have been used to communicate and pass down the myth of Black inferiority.

O’Connell also emphasizes that the decisions of Church leaders shaped how white Catholics thought about race and racism. At every turn, Catholic leaders missed opportunities to subvert the racial hierarchies that oppressed Black people in the United States. Instead of requiring “confederate Catholics to atone for the sin of slavery” or suggesting other measures of reckoning honestly with the trauma of slavery and the Civil War, U.S. bishops exercised what O’Connell terms “a preferential option for the institutional Church.” They prioritized converting Black people “rather than reconstructing conditions that continued to oppress their bodies,” and they continued to focus on defending against Protestant discrimination and promoting doctrinal orthodoxy rather than opposing oppression.

Instead of resisting racial divisions, the bishops reinforced them, drawing parish lines to separate Catholics by race.
sharetweet

Instead of resisting racial divisions, the bishops reinforced them, drawing parish lines to separate Catholics by race. Here, O’Connell demonstrates how the factors that structure where people live, work, and worship—not only parish membership, but also zoning laws, hiring practices, and school policies—affect who people see in their daily lives. Their relative isolation from Black people profoundly influenced white Catholics’ imagination, cultivating “a sense that their experience was normative and therefore uncontestable.” White Catholics siloed in their own parishes did not see people of color depicted in religious art, worshiping alongside them in the pews, or serving as clergy, which subtly communicated the myth that Black people “were somehow less like the Divine and maybe even less human.” This helped reinforce the idea that white Catholics were more deserving of ecclesial resources than Black Catholics. Without encounters across racial lines, white Catholic assumptions “about God, themselves, or other people” remained unchallenged.

O’Connell’s second revelation offers some hope to the reader: traditions are constantly evolving. Although Catholicism and anti-Blackness remain entangled, O’Connell believes that connection can be unwound. The first step in the process of “undoing the knots” is truth-telling. White Catholics must lay aside our tacit beliefs about white superiority and our images of white-only saints, stop downplaying our advantages, and instead recognize the sinister aspects of Catholic history and identity in the United States.

In dwelling on her family’s participation in Catholic anti-Blackness, O’Connell models what it would look like for white Catholics to become “more truthful storytellers about ourselves and our traditions.” For her, a willingness to encounter painful pasts and to recognize our own ancestors as perpetrators of anti-Blackness is a form of witness. Being a witness means sharing knowledge of what we have encountered and offering others the chance to encounter transformative perspectives and radical ideas. O’Connell is honest about the pain and discomfort she experiences in discovering her own relatives’ biases and blind spots, as well as their participation in gentrification and the exploitation of Black people. But by mourning the past, she introduces the virtue that she hopes, if put into practice, can transform how white Catholics confront racism: racial mercy. Drawing on the work of Jesuit moral theologian James Keenan, O’Connell defines racial mercy as “a willingness to enter into the chaos of racism.” She asks white Catholics to dwell in the discomfort of Catholic entanglement with anti-Blackness. As we confront the shame and guilt that emerge when we look at our own involvement in racism, we need God’s mercy to acknowledge our shortcomings and seek forgiveness before we can meaningfully participate in the work of racial justice.

O’Connell’s vision of racial mercy encourages us to think on the level of systems and structures. Examining her own family history preserves the role of individuals as agents within these systems and structures, but her analysis of racial boundaries in parishes, neighborhoods, and communities directs our focus to transforming how our communities are structured, funded, and supported. O’Connell concludes, “If our government and our Church—at their respective national, state, and local levels—worked in tandem to create and enforce policies and practices that segregated metro areas like Philadelphia, then they are also capable of working together to repair some of that damage by enacting policies and practices that reintegrate those neighborhoods.” As parishes and schools close, merge, and restructure, we have the opportunity to reshape the boundaries of Catholicism to enact solidarity across racial lines.

But the power to make structural decisions remains largely with the Church hierarchy. Even as Pope Francis encourages lay participation in the process of synodality, the kind of structural change O’Connell calls for requires Church leaders to begin “undoing the knots.” Instead of asserting that “the Church has been antiracist from the beginning” and labeling Black Lives Matter as a Marxist “pseudo-religion,” the U.S. bishops should listen to the voices of Catholics willing to tell the truth about the Church’s involvement with racism. As the National Black Sisters’ Conference reminded Archbishop Gomez, “Over four hundred years of slavery, trauma, pain, disenfranchisement, and brutal violence have been a part of the fabric of this nation and the American Catholic Church.” Without transformative change, the Church will continue to be caught up in anti-Blackness.

Emma McDonald is a doctoral candidate in Theological Ethics at Boston College.