'The End of the Tour' 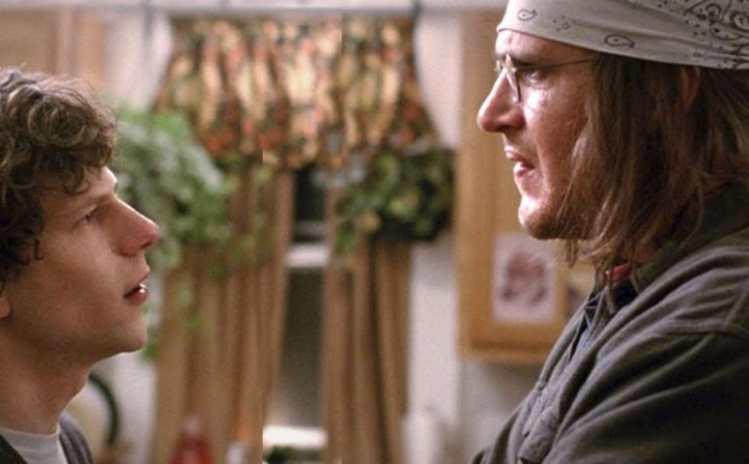 In recent years, the troubled writer has been a theme in movies as disparate as Wonder Boys, Adaptation, The Door in the Floor, Sideways, and The Squid and the Whale. The writer-protagonists of all these films are fictional, and it’s easy to understand why. Taking on the biopic of a famous real-life writer means tangling with a well-established public image; exploring an unknown gives a director more freedom.

In The End of the Tour, director James Ponsoldt abjures this freedom and addresses the life—and death—of a literary idol. For years before his suicide in 2008, and even more since, David Foster Wallace served as the Platonic ideal for a generation of younger writers, winning acolytes bedazzled by his virtuosity on the page and inspired by his personal combination of soul-searching vulnerability, rampaging intellectuality, and grandiose ambition. These traits shaped his magnum opus, Infinite Jest, a mammoth novel, set partly in a substance-abuse recovery center, that won the kind of critical praise most writers can only fantasize about (and obsessively do); Walter Kirn’s review in New York magazine deemed the book “spectacularly good,” announcing that “the competition has been obliterated...as though Paul Bunyan had joined the NFL or Wittgenstein had gone on Jeopardy!”

Yet Wallace was no one-book wonder. Indeed the impression he made was of an intelligence so lambent, and interests so promiscuous, that a book—any book—was too limited a vessel to contain them, to contain him. The subjects he addressed as a journalist-essayist ranged from John McCain’s 2000 presidential campaign, to the U.S. Open tennis tournament, to the porn industry, to a Maine lobster festival (for Gourmet), to his famous piece on cruise ships, “A Supposedly Fun Thing I’ll Never Do Again”; his nonfiction books included a philosophical inquiry into the mathematical concept of infinity and a critical study of the work of American philosopher Richard Taylor.

Those unfamiliar with Wallace’s literary m.o. might seek out that Gourmet article, “Consider the Lobster.” It starts off like a standard travel-and-tourism piece (“The enormous, pungent, and extremely well-marketed Maine Lobster Festival is held every late July in the state’s midcoast region...”), but soon devolves into something far stranger, a kind of self-interrogating ethical inquiry. “At the Festival,” Wallace writes,

standing by the bubbling tanks outside the World’s Largest Lobster Cooker, watching the fresh-caught lobsters pile over one another, wave their hobbled claws impotently, huddle in the rear corners, or scrabble frantically back from the glass as you approach, it is difficult not to sense that they’re unhappy, or frightened, even if it’s some rudimentary version of these feelings …and, again, why does rudimentariness even enter into it? Why is a primitive, inarticulate form of suffering less urgent or uncomfortable for the person who’s helping to inflict it by paying for the food it results in? I’m not trying to give you a PETA-like screed here—at least I don’t think so. I’m trying, rather, to work out and articulate some of the troubling questions that arise amid all the laughter and saltation and community pride of the Maine Lobster Festival. The truth is that if you, the Festival attendee, permit yourself to think that lobsters can suffer and would rather not, the MLF can begin to take on aspects of something like a Roman circus or medieval torture-fest.... As far as I can tell, my own main way of dealing with this conflict has been to avoid thinking about the whole unpleasant thing.

The heavily footnoted article is classic Wallace: a scholarly hall of mirrors whose rollicking pedantry balances postmodern ironies with plaintive notes of sincerity and self-examination. And has any journalist ever adorned a Gourmet article with 2,000 words of notes?

Wallace was that rare writer whose mind itself was even more fascinating than what it produced, leaving readers peering through the words to watch him perform, pure ratiocination, a brain in a cage. His reputation has been shaped by the themes of drug and alcohol dependency that ran through his life and work—and the posthumous revelation that he was far more seriously depressed than his public knew.

The End of the Tour is largely limited to one week in late winter 1996, when a young novelist named David Lipsky finagled an assignment from Rolling Stone to write about Wallace, and hung out with him for five days, visiting his writing class at Illinois State University, accompanying him to events promoting Infinite Jest, and conducting a nonstop interview. The article was never published, but after Wallace died, Lipsky dug out his old interview tapes and confected them into a book, Although Of Course You End Up Becoming Yourself: A Road Trip with David Foster Wallace. The film’s script, by Donald Margulies, makes heavy use of the transcript of those conversations.

Margulies and Ponsoldt create a conspicuously endearing version of Wallace, bringing appealing traits to the fore: earnestness, awkwardness, loneliness; intensity, honesty, vulnerability. One suspects this wasn’t the whole picture of Wallace. What about his famous brilliance? Or his galloping ambition and competitiveness? In a recent talk, Wallace’s biographer, the New Yorker writer D. T. Max, pointed out that as an undergraduate Wallace was prone to boasting and rabidly intent on being the best at everything he did.

Not much of this makes its way into Jason Segel’s portrayal of Wallace; and friends of the writer have complained bitterly that the film “gets everything wrong” about him. The journalist and film critic Glenn Kenny complains that “Wallace the artist and Wallace the conversationalist take a distant back seat to Wallace the eventual suicide,” charging—accurately—that “even when he’s cracking wise, there’s no light or lightness to the character.” At the same time, Kenny notes, “Segel’s Wallace is never really dark, either. He’s just Kinda Sad.” Even Wallace’s eccentric, leonine good looks suffer a bizarro-world distortion. At 6′4″ and heavyset, Segel is a lumbering, hulking figure on whom Wallace’s trademark granny glasses look silly. His portrait of the artist presents a shambling, hesitant, junk-food-bingeing, sweet-souled and suffering giant.

But if you can put aside the issue of faithfulness to its real-life model, The End of the Tour has a fair amount to offer. There’s nothing spectacular on hand. That’s not surprising. Writers’ emotional complexities, and the art they engender, are harder to capture on the screen than, say, painters’, if only because there’s nothing to look at. “What happens,” novelist Michael Chabon has said, “is a lot of typing.” What happens in The End of the Tour is a lot of talking, as Lipsky (played with twitchy intelligence, and more than a touch of weaselly envy, by Jesse Eisenberg) interrogates, cozies up to, and spars with the moody Wallace. Like his writing, Wallace was highly self-conscious, his thoughts habitually turning back on themselves; and Ponsoldt and Margulies succeed in capturing the nervous drama of Lipsky’s skillful and highly goal-oriented mind chasing a far more elusive mind down labyrinthine alleyways in pursuit of a story.

THE RESTRICTIVE STRUCTURE of the film presents Wallace in near-total isolation—no family, friends, colleagues or lovers, just him and his dogs—and the journalist out to “get” him down on paper. Ponsoldt, who directed 2013’s The Spectacular Now, has a gift for close reading of relationships—his preferred scene sets two people in intimate, contested conversation—and he zeroes in on the fraught dynamic between the slightly older, celebrated writer and the worshipful-resentful, anonymous younger one.

In fact, the film’s best moments are actually about Lipsky. In an opening scene, we see him lying in bed in his New York City apartment, holding Infinite Jest and complaining to his girlfriend about all those effusive reviews. When she retorts that “maybe it’s that good,” he grumbles, then finally starts to read—and moments later mutters an oath. In one of the film’s closing scenes, we observe Lipsky on the last day of his week with Wallace, the two exchanging warm goodbyes. Wallace ducks out for a moment, maybe to the bathroom—whereupon Lipsky pulls out his tape recorder and races around the house, breathlessly describing random objects for possible use, rifling Wallace’s room for valuables like a thief. Lipsky isn’t portrayed as particularly nasty, just a typical instance of your basic runaway Manhattan ambition-plus-insecurity. When he asks Wallace why he’s living in the nowhere-land of rural Illinois and not New York, the writer pointedly describes his aversion to “the enormous hiss of egos at various stages of inflation and deflation” that he says he always hears when visiting the city.

Implicating Lipsky in such ripostes, Ponsoldt and Margulies end up shedding more light on the questioner than the questioned. In the process they open up a Janet Malcolm–ish dimension in which the jousting exchanges between Lipsky and Wallace—with the latter challenging the former’s intentions and continually focusing attention on the underlying professional purpose of their time together—explicitly raise questions of appropriation and control of the narrative. I find it difficult to imagine such cruxes in a film about, say, Lillian Ross’s famous New Yorker profile of Ernest Hemingway, but it’s fitting that a film about Wallace should turn on these kinds of meta-issues. They mark him as very much a writer for our era—not Hemingway off in Africa, or Scott Fitzgerald in Paris, or Ken Kesey in Mexico. “I live my life in the library,” Wallace says at one point, and it seems true. There, and in his own relentlessly active mind.

The End of the Tour closes with a slow-motion shot of Wallace revolving in rapture during a group dance at a local church, followed by a glance at Lipsky in a New York bookstore years later, wiping a tear as he reads from his book about Wallace. These conjoined images, sentimental to the point of being maudlin, make for perhaps the worst moment in the film. I prefer the bracing honesty of, say, Capote, which ends with the ambitious young writer-journalist (Wallace and Lipsky, folded into one) brazenly hoping for Hicock and Smith, the murderers at the center of his still-unpublished manuscript, In Cold Blood, to be executed so that he can finish his book. Such mordant insights seems truer to the themes of Ponsoldt’s film than the reverential notes on which he makes it close, folding its study of writerly cat-and-mouse into hagiography and the mistiness of myth.