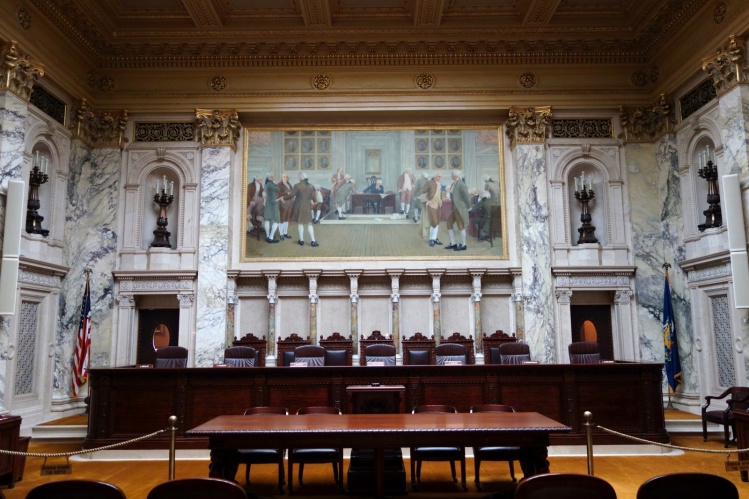 Seldom has this country needed moral discernment and legal wisdom as much as it does now. The courts, the rule of law, and standards of common decency find themselves under persistent assault from the executive branch of the federal government, often with the tacit or expressed approval of a large portion of the citizenry. Cathleen Kaveny’s collection of essays, Ethics at the Edges of Law, provides abundant practical wisdom about pressing issues by showing how the legal tradition can serve as a source of insight for Christian ethicists and for the morally serious general public as well. Those of us who seek inspiring examples of how careful and articulate thinking can advance the quality of public life should be grateful for books like Kaveny’s.

The overall argument of Ethics at the Edges of Law takes the form of demonstration through a series of dialogical engagements between Kaveny, representing the legal tradition, and mostly Christian ethicists, some of whom, like her own mentor John Noonan, were also jurists. Kaveny’s own work has for many years straddled the boundary between legal and ethical discourse, so she is an ideal interlocutor. And she has chosen very astute dialogue partners: one secular ethicist (Jeffrey Stout), one Eastern Orthodox (H. Tristram Engelhardt Jr.), three Protestants (Gene Outka, Stanley Hauerwas, and Paul Ramsey); and five Catholics (John T. Noonan Jr., Margaret Farley, Robert E. Rodes Jr., Germain Grisez, and Cardinal Walter Kasper). The book derives much of its intellectual energy from Kaveny’s ability to represent sympathetically the ideas of this wide variety of ethicists and to bring to bear upon them the resources of the American legal tradition in a way that is both critical and constructive. Taken together, these elaborate encounters show convincingly that the law, as Kaveny says, “can illuminate and extend the work of important religious moralists on a range of topics.”

Kaveny divides the nine essays into three sections of three essays each. Part I, which includes conversations with the works of Noonan, Hauerwas, and Stout, will interest mainly specialists in the fields of Christian ethics and jurisprudence. These three essays explore the many implications of the fact that both Christian moral reflection and American legal thought and practice constitute “traditions” in Alasdair MacIntyre’s sense of the term: they are socially embodied arguments extended over time. This similarity between Christian ethics and legal thought, once noticed and explicated, not only underscores the deeply historical dimension of both fields; it also provides the foundation for using legal methods of analysis to enrich Christian ethical ideas and methods. The best work within both traditions features a kind of dialectic between the irreducible particularities of given cases or situations and the general rules, themselves subject to development and change, which govern these seemingly disparate enterprises. Exclusive or excessive attention to one or the other of the two poles of this dialectic almost invariably results in bad law or faulty ethical judgment.

The three essays in Part II, engaging the work of Outka, Farley, and Ramsey, concern themselves in one way or another with the complicated relationship between love and justice. The first of the three, titled “Neighbor Love and Legal Precedent,” may be of most interest to the general reader: because of the salience of the issue that it examines, and because Kaveny is at her best here, showing how Christian ethics and legal thought can inform and strengthen each other. Since the essay is, in this sense, the most finely balanced of the nine and something of a model of interdisciplinary work, it is worth examining in some detail.

Kaveny’s examination of Outka’s account of Christian love and its relationship to justice proceeds through an extensive discussion of a textbook case in contract law, Watts v. Watts, decided by the Wisconsin Supreme Court in 1987. Sue Ann and James Watts had lived together as if they were married for more than a decade before their relationship broke down. They had two children together, filed joint income-tax returns, and shared some of the burdens of managing James’s landscape business. Upon dissolution of this “marriage-like” relationship, Sue Ann claimed that she deserved to be treated as though she were a divorced spouse, entitled to an equal part of the couple’s property under the Wisconsin Family Code. The trial court dismissed her claim on the grounds that she was never legally married and Wisconsin had, by statute, explicitly refused to sanction common-law marriages. The Supreme Court eventually ruled that Sue Ann had grounds for her claim of a breach of (implied) contract and remanded the case to the trial court, allowing it to go forward on grounds other than Wisconsin divorce law. In the end, Sue Ann recovered over $100,000—about a half a million less than she would have recovered with an even property division under Wisconsin divorce law.

The dilemma before the Supreme Court of Wisconsin was to find a way to honor Wisconsin’s legal framework of general rules governing marriage while also treating Sue Ann equitably in her particular circumstances. The court did not want to rule in a precedent-setting way that might subtly undermine the importance of legal marriage as it had been carefully established through Wisconsin law. Yet it also wanted to do justice to Sue Ann’s forceful and plausible claims that she had been treated unfairly. A similar problem, according to Kaveny, arises in Outka’s efforts to apply his view of Christian love as both impartial and universal in cases where two neighbors conflict. For Outka, universal Christian love of neighbors requires the kind of justice that extends the same rights and privileges to all human beings. And that love sometimes assumes the form of normative rules that outline how human beings should practice and secure such fair and equal treatment. But what does love require in a situation where there is an apparent conflict between following a rule and doing justice to a particular person who has been unjustly treated? Or, as Kaveny reframes the issue for both the Wisconsin court and for Outka, how do we love both neighbors who are close at hand (James and Sue Ann Watts as they stood before the court) and more distant (the citizens of Wisconsin whose representatives in the legislature framed the rules governing marriage in Wisconsin)? By moving back and forth between Outka and the Wisconsin Supreme Court, between ethical and legal reflection, Kaveny strengthens and clarifies Outka’s position while also showing how the final disposition of the Watts case fell short of standards of love and justice.

During the course of her discussion of Watts v. Watts, Kaveny introduces and develops an important distinction that she seems to ignore in the book’s next essay, which is about the use of victim-impact statements in sentencing hearings. She argues that in the Wisconsin case, the judges had to contend with two different functions of the law: the remedial function that seeks to remedy injustices, and the pedagogical function that seeks to instruct and encourage others to avoid situations that create the need for remedy in the first place. Determining what was fair and just for Sue Ann Watts involved the first function; incentivizing legal marriage involved the second. This distinction would seem to pertain directly to the use of victim-impact statements in the context of criminal sentencing. Yet in her response to Margaret Farley’s account of compassionate respect as a possible justification for the use of victim-impact statements to insure equal concern for victims as well as perpetrators, Kaveny seems to forget her own argument about the pedagogical use of the law.

In some cases, victim-impact statements should not be used; in other cases, like that of Larry Nassar, they probably should be
sharetweet

For some very good reasons, Kaveny finally opposes the use of victim-impact statements in criminal sentencing. But in weighing the relevant considerations for and against them, including Farley’s account of compassionate respect, Kaveny does not consider at all the possible pedagogical efficacy of victim-impact statements. It would be hard to deny that the more than two hundred victim-impact statements delivered last February in a Michigan courtroom during the sentencing trial of Dr. Larry Nassar, who had been convicted on multiple charges of criminal sexual misconduct, did not help raise public awareness of the breadth and gravity of sexual misconduct in the United States. Though the Nassar episode probably occurred after Kaveny had written her essay, there were already several other instances of multiple victim-impact statements awakening public concern. Kaveny might respond that there are other, more appropriate ways to awaken such concerns and inspire public action. And she would likely argue that the provision of justice for the defendant requires that the jury remember that the state, not the individual victim, is the defendant’s adversary. In my view, the effort to balance the two functions of the law requires prudential wisdom. In some cases, victim-impact statements should not be used; in other cases, like that of Larry Nassar, they probably should be.

If the essays in Part II of Kaveny’s book will be the most interesting to the general reader, the three essays in Part III are likely to be the most interesting to Commonweal readers, since all three of them treat matters that are, or should be, of special concern to Catholics. One of them, part of which appeared in the pages of this journal, is especially pertinent and compelling, and it demonstrates most convincingly of all the essays how the common-law tradition can enrich Christian ethical reflection. Titled “Second Chances and Statutes of Limitations,” the essay fortifies Cardinal Kasper’s work on mercy as it bears on the question of whether divorced and remarried Catholics should be admitted to Communion. Kaveny strongly supports Kasper’s proposal that such remarried Catholics, under certain conditions, be allowed to receive the sacrament. Drawing extensively and imaginatively on the resources of the common law, she compellingly argues (1) that the alleged sin against the first marriage committed by those who have remarried is not properly called adultery in any intelligible sense, (2) that the meaning of several sins or crimes like adultery and murder has changed over time, and (3) that the sins against the first marriage should be regarded as completed sins deserving of mercy, not as continuing sins in need of discipline and repeated condemnation. If Kaveny’s arguments are as sound as this reviewer thinks they are, she has completely refuted the major objection to Kasper’s proposal.

In sum, both the range of issues in this book and the depth of wisdom and learning that Kaveny brings to them are consistently impressive. Her failure to take account in one essay of a relevant distinction that she herself has introduced in another is a minor problem—and one to which many collections of essays fall prey. She could occasionally have done a better job of integrating the separate essays into a coherent whole. But this is a small blemish in what is otherwise a very fine book, and an example of interdisciplinary scholarship at its best.

Mark R. Schwehn is Provost Emeritus of Valparaiso University and Professor of Humanities in Christ College, the honors college of Valparaiso.