Happily Ever After
By Richard Alleva
Movies 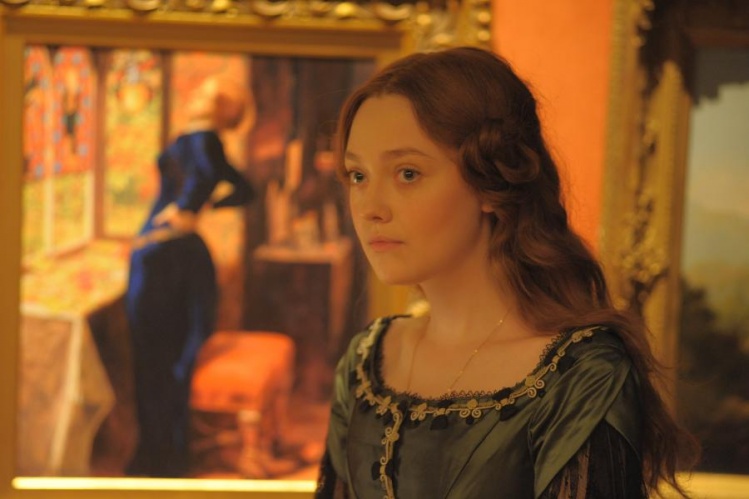 This has been a dreadful year at the movies for the great Victorian art critic John Ruskin. The otherwise superb biopic Mr. Turner portrays the man as an effeminate popinjay whose gaseous generalizations are dismissed by the very painter whose work he extolls. As David Denby observed in his New Yorker review, this may have been writer-director Mike Leigh’s “way of putting down critics who reduce an artist’s work to banal words.”

Now, in Effie Gray, a film about Ruskin’s disastrous marriage, written by Emma Thompson and directed by Richard Laxton, the eminent Victorian comes across as a monument of male cluelessness—a man whose sexual hang-ups and ignorance of female sexual and emotional needs end up sending his teenage Scottish bride to bed with psychosomatic ills. Trapped in the house of her in-laws, who (according to the movie) treated her first as a pet and later as inconvenient baggage, Effie Gray finally sued successfully for an annulment, married the pre-Raphaelite artist John Everett Millais, bore him children during a long and apparently happy marriage, and lived to a ripe old age.

The case itself certainly illustrates how a sexual peculiarity could reinforce domestic tyranny in a Victorian household, but Emma Thompson has descried fairy-tale possibilities in the facts. In the film’s first scene, we see Effie (an all-too-placid Dakota Fanning) dreamily strolling through a garden while her off-screen voice recounts a bedtime story to a child—probably her younger sister—about a maiden who married a man with wicked parents. Intermittently throughout the film we are encouraged to see Effie as a sort of real-life Cinderella, plucked from the bucolic bliss of her native Scotland and trapped in a gloomy mansion, with her mother-in-law enacting the part of the traditional wicked stepmother and the handsome and sexually normal Millais eventually filling the role of Prince Charming. Thompson has even written herself in as fairy godmother—Lady Eastlake, wife of the president of the Royal Academy. A bluestocking who deplores the custom of women dropping their family name for their husbands’ and sniffs at the way men dominate dinner-party conversations, Lady Eastlake urges Effie on to independence and finally provides her with a capable lawyer who effects the annulment. Thompson’s performance is a delight: the best single moment in the movie is when the kindly aristocrat, flustered at the revelation of her -protégé’s persistent virginity, tries to lift a teacup to her lips and can’t quite do it. But for the fairy-tale vein in her screenplay to work, the director would have to bring more flair, more texture, and more daring to the project than Richard Laxton does.

I may have been spoiled by Mr. Turner’s bracing, unpredictable realism, but the kind of well-groomed historical reconstruction offered by Effie Gray has been on display all too often, usually on PBS at 9 p.m. on Sunday nights. The movie’s dark, velvety lighting makes it look as though it had been filmed through a veil, and the visual gentility sucks the dramatic oxygen out of even the most potentially turbulent scenes. The placement of the actors in most shots seems merely conventional and the editing is metronomic. Such smothering good taste, such measured tempos, such ensuing boredom! Movies about stuffy people don’t have to be stuffy. In the 1970s I hated the vulgarity of Ken Russell’s historical freakshows (The Music Lovers, The Devils, etc.), but Effie Gray made me wish Russell were at the helm here, goosing the proceedings into some semblance of life.

Some of Thompson’s script might have benefited from a bit less Victorian delicacy and a bit more frankness. There is a latent kinkiness in the way Ruskin insists on Effie accompanying him and Millais on a trip to Scotland, where the painter is to do the critic’s portrait. The three sleep in the same room in a cottage. Is Ruskin trying, consciously or unconsciously, to relieve Effie’s sexual frustration by maneuvering her into bed with Millais? A less reticent director might have conjured up myriad glimpses of forbidden, half-expressed longings, but Laxton opts instead for postcard views and furrowed brows. He’s more uptight than Effie’s in-laws.

The movie also suffers from a lack of balance. Thompson’s script is so focused on Effie’s plight that it never explores Ruskin’s point of view. Ruskin could be a hectoring moralizer, but his writings also display a passionate nature. And though I’m not so naïve as to believe that an author’s conduct exactly mirrors his work, surely the sensitive mind that produced the best sentences of The Stones of Venice must, at some level of consciousness, have realized that his wife was in pain. At the very least, he must have understood that their marriage was not like other marriages. Wasn’t he in torment, too, and shouldn’t we see this? The collision of his dreams with Effie’s could have produced real drama. But Thompson’s script combines with Greg Wise’s mummified performance as Ruskin to give us a Victorian caricature that belongs in a monster movie, not the fastidious costume drama that Laxton has assembled.

WHILE EMMA THOMPSON FOUND a hint of Cinderella in the Ruskin-Gray imbroglio, how did her ex-husband Kenneth Branagh do with the real Cinderella in his new adaptation of the fairy tale for Disney? Moderately well, in my opinion.

As usual with any Branagh production not drawn from Shakespeare, there is a sense of rush, of expediency, of getting the job done soon because there’s another one waiting in the wings that might be more interesting. Haste ruined his 1994 Frankenstein, but this version of the famous Charles Perrault story about a drudge who becomes a princess delivers something of the original’s grace and wit. The pumpkin-into-coach transformation could have been more magical, but the rush to return before midnight achieves excitement and humor with the horses, coachman, and footmen evincing both panic and relief as they shrink back into small animals. (No more imperial trimmings, but at least we’re back home!) And though my favorite character from the Disney 1949 animated version, the gloatingly vicious cat Lucifer, gets little attention here, there is some of that character’s feline malevolence in the performance of the superb Cate Blanchett, who plays the stepmother. The script (by Chris Weitz) somewhat mitigates her wickedness by playing up her insecurity as the second wife of a man who still recalls his first spouse with obvious wistfulness. But Blanchett gratifyingly resists all such psychologizing; she knows she’s playing an archetype, not a person. Feel free to hiss: the actress would revel in it.

Branagh also had the good sense to cast Lily James as his heroine. James is an actress who can convey goodness without a trace of smugness. (The animated blonde in the 1949 version always struck me as a mean-girl cheerleader type.) Yet something about Cinderella’s casual forgiveness of her tormentors at the end of this new film both amused and annoyed me. In Perrault, the heroine not only forgives her two stepsisters but also gets them married to aristocrats at court. In the Grimm brothers’ version, the wretched pair go to the royal wedding where two little doves, probably dispatched by Cinderella’s dead mother, peck out one eye from each of the stepsisters; then, after the wedding, the poor dears lose the remaining ones. In Branagh’s version, neither Gallic noblesse oblige nor Teutonic retribution will do. Once Cinderella extends her forgiveness, the unpleasant relatives simply vanish. Poof. Evil is erased as if it never existed. How American. How Disney.

Published in the May 15, 2015 issue:
View Contents
Tags
Movies

'Manchester by the Sea' & 'Fences'