The Eclipse of Equality 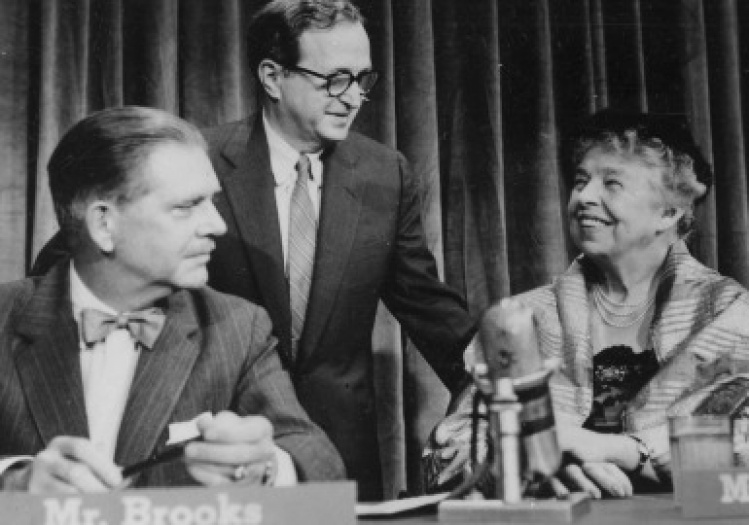 With a history of nearly seventy years, Meet the Press has charted the inside-the-beltway conversation since well before the Capital Beltway was built. Solon Simmons, a professor of conflict analysis and resolution at George Mason University, has sifted through the program’s archive to show how sharply Washington’s conversation over economic equality has changed over the course of seven decades.

Simmons argues there has been an “eclipse of equality,” with such matters as labor, collective bargaining, and class struggle—hot issues in the show’s earlier decades—disappearing from mainstream political discussion. Equality has always loomed large in the American discussion, of course. Yet as Simmons notes, over the past thirty years conservatives have largely succeeded in framing questions about equality in libertarian terms. Meanwhile, liberals have increasingly looked at it through the lens of multiculturalism rather than as a question of social justice. These political developments, Simmons contends, have contributed to unfair economic policies that work against most Americans.

The strength of the book is the author’s use of quotations from the more than thirty-five hundred episodes of Meet the Press, beginning with a radio broadcast in 1945 and televised by NBC starting in 1947. Especially interesting are the now obscure political figures who were once on the cutting edge of the national conversation.

Harold Knutson is one such example. Nearing the end of his three-decade service as a Republican congressman from Minnesota, he was interviewed in 1947 about GOP efforts to reduce the income tax. “Back in the ’20s, we had four tax reductions, and each one resulted in increased revenues,” he says.

Simmons sees in this a harbinger of Ronald Reagan’s ascendancy. The New Deal seemed unassailable at the time, but one senses the tide already shifting Meet the Press shows from the late ’40s. That shift is implicit in the hostility a panel of journalists showed to a member of President Harry Truman’s newly created Council of Economic Advisors, Leon Keyserling. Moderator Larry Spivak opened by telling Keyserling, who appeared on the show five times, that a Republican congressman had called him “the most powerful and dangerous man in America today.” A Los Angeles Times reporter asked if the new council was going to “tell Americans how to spend their money and make America over.” And, with her voice rising, May Craig of Maine’s Portland Press Herald warned, “If you forge the weapon of centralization, the dictator inevitably comes and grabs it; that’s what happens everyplace else. It could happen here.” Simmons contends that Craig’s questions were a good barometer of where Middle America stood.

In its early years, Meet the Press was also filled with discussion about the confrontation between labor and management. Union leaders such as Walter Reuther and Mike Quill alternated appearances with frequent guests like Eric Johnston, the chairman of the U.S. Chamber of Commerce, and Sen. Robert Taft, a conservative Republican from Ohio. Ultimately, Simmons observes, anti-union forces triumphed in the show’s debates as well as politically by using a narrative that portrayed organized labor as a force to be feared. Reporters, for example, often posed questions about labor in ominous tones, expressing concern over Communist infiltration and, later, organized crime, especially in the Teamsters Union. (Simmons acknowledges the role of political radicals in some unions but soft-pedals the mob influence.) In 1957, Sen. John McClellan, an Arkansas Democrat who headed a high-profile probe of the Teamsters, appeared on the show. In response to an assertion by May Craig that the union shop is “the root part of the evil” in unions, McClellan advocated state right-to-work laws. Thus Simmons sees a link between the labor-racketeering investigations of the 1950s and the success of today’s “right to work” movement and the corresponding decline in union membership. Simmons himself sees the right to unionize as a matter of civil rights. In the ’50s, he notes, collective bargaining was at least a subject of conversation, even if labor leaders were put on the defensive. From late 2003 to early 2011, there was just one reference to collective bargaining on Meet the Press—concerning a baseball strike. When unions were discussed at all it was usually with a negative view of their political influence.

As Simmons sees it, the Meet the Press archive reflects the story of how influential business figures, uncomfortable with the New Deal, sought after World War II to advance unrestricted private enterprise, taking advantage of Middle America’s disquiet over government power. Anxiety over Washington’s efforts to enforce the civil rights of minorities provided “Old Dealers” a wedge to oppose social programs generally, all in the name of smaller, less intrusive government. Republicans portrayed themselves as the party of freedom, and Democrats, the party of tolerance. For Democrats, this meant much less concern for class-based struggles between workers and business owners. “We’re doing well with the race problem,” Andrew Young said in a 1996 Meet the Press appearance. “We’re not doing well at all with the class problem.”

Democratic politicians, plied with campaign donations from many of the same interest groups as Republicans, were increasingly reluctant to portray the rich as the bad guys. Fast forward to 2012, when another African-American Democrat, Newark Mayor Cory Booker, criticized Obama campaign ads that attacked Mitt Romney for his role in the Bain Capital private equity firm. “It’s nauseating to the American public,” Booker said on a May 2012 show. To Simmons, that captures the change in Democratic rhetoric: Franklin Roosevelt would have approved of the Obama ad, he writes. Still, Simmons expresses his hope that the national conversation may turn back to issues of economic fairness, and that outrage over inequality will emerge more strongly, as it did in the Occupy movement.

Quoting Meet the Press broadcasts in a careful, evenhanded way, Simmons demonstrates that the show is indeed a wonderful historical archive, “a gold mine for the student of symbolic politics.” It is history in the heat of the moment, and thanks to the camera we can observe not only the words but the gestures, smiles, and frowns of the actors. Simmons’s approach has its obvious limits, though. However pointed reporters’ questions may be, they can’t replace behind-the-scenes investigation. We may know a politician’s words, but not his campaign donors. If Al Gore’s class-based critique failed to gain traction in the 2000 presidential campaign, as Simmons suggests, perhaps it is because his words seemed like empty political rhetoric, given that Democrats had rather cozy relations with big business in the 1990s. Needless to say, a truly comprehensive study of the “eclipse of equality” in American society would require sources beyond Meet the Press tapes.

Nor is the book a work of media criticism. Simmons provides insights into the assumptions behind the reporters’ questions and their attitudes toward historical figures such as the red-baiting Sen. Joseph McCarthy, but he doesn’t flesh that out into a full-scale critique of inside-the-beltway media.

Yet this is a valuable book. In an engaging and innovative way, Simmons shows how the current debate over economic inequality has developed. The passion and energy in his writing make The Eclipse of Equality interesting throughout. It is a provocative challenge to those on both sides of our political divide.