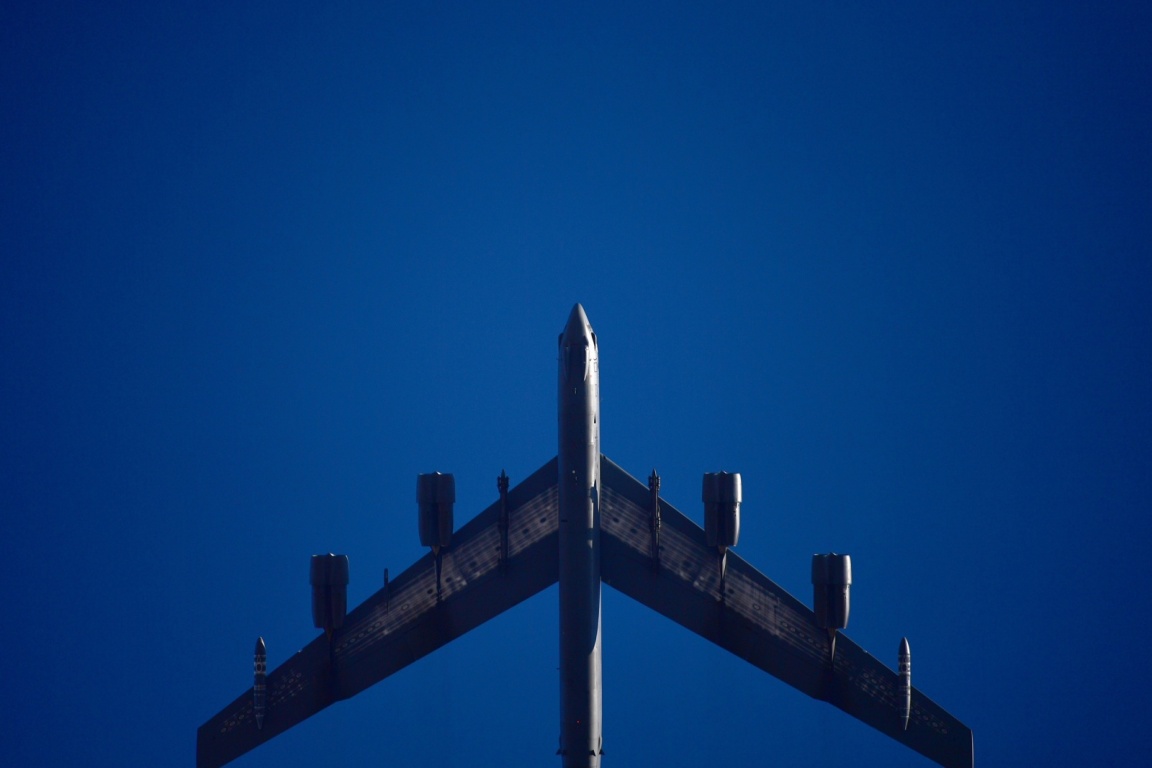 A B-52H Stratofortress flies over Minot Air Force Base, North Dakota., January 30, 2018. This bomber, along with three others, recently deployed to Europe to exercise a state of readiness at RAF Fairford, United Kingdom. Air Force photo by Tech. Sgt. Jarad A. Denton

An Arms Race with Ourselves
By Andrew J. Bacevich
Donald Trump
War and Peace
Domestic Affairs

The famous “Doomsday Clock,” first unveiled in 1947 in the Bulletin of the Atomic Scientists and periodically updated since, was recently reset at two minutes to midnight. Only once previously has the clock warned of being so ominously close to the nuclear abyss. That was back in 1953, shortly after the United States and the Soviet Union, engaged in an all-out arms race, had each detonated their first hydrogen bomb.

To judge by its Nuclear Posture Review (NPR), released in early February, the Trump administration largely agrees with the Bulletin as to the gravity of the present moment. In his preface to the NPR, Secretary of Defense James Mattis describes an “international security situation that is more complex and demanding than any since the end of the Cold War,” while the body of the report warns of a “deteriorating threat environment.” Where the keepers of the Doomsday Clock and Trump administration officials like Mattis differ is in how they believe we should respond to these troubling developments.

The Doomsday monitors urge the U.S. to move back from the brink through serious and sustained engagement with its rivals. The NPR calls for a different approach: it proposes the creation of  a whole new generation of nuclear weapons and delivery systems, enabling the United States to “enhance the flexibility and range of its tailored deterrence options.”

In fact, the Trump NPR endorses a nuclear modernization program inaugurated by the previous administration. It is an Obama holdover—a rare example of President Trump endorsing a project begun by his predecessor. The program’s total estimated costs (unmentioned in the NPR) exceed one trillion dollars, equal to Trump’s promised but as yet unfulfilled investment in domestic infrastructure.

The lengthy report does not make for easy reading. Given Trump’s reported work habits and short attention span, one may wonder if he has actually absorbed its contents or understands its implications. Yet in terms of substance, the NPR comes straight out of those establishment precincts that candidate Trump repeatedly derided as “the swamp.” For evidence that Trump’s vow to drain that swamp remains unfulfilled, look no further.

To plow through the text of the NPR is to travel back in time. The argument it advances reiterates precepts that were in fashion sixty years ago, before the Cuban Missile Crisis, the Vietnam War, or 9/11. Certainly the sentiments it expresses would have found favor with pioneering figures of nuclear strategy such as Herman Kahn and Albert Wohlstetter, with the Cold War-era editorial board of the New York Times, and with military officers like General Curtis LeMay.

Kahn and Wohlstetter, advocates of the Cold War policy of “mutual assured destruction,” would appreciate the allusions to “diversity,” “tailoring,” and “flexibility,” which lend the document a veneer of sophistication. Times editors would take solace in the NPR’s assurances that, in the event of an actual nuclear conflict, U.S. forces will “adhere to the law of armed conflict” while taking steps to “minimize civilian damage to the extent possible consistent with achieving objectives.” LeMay, who back in the 1950s transformed Strategic Air Command into an instrument of “overkill,” would be especially pleased. Stripping away the packaging, the storied architect of SAC would see the NPR for what it is: a blueprint for extending U.S. nuclear dominion far into the future.

It contains no mention—none—regarding any environmental implications of resuming nuclear weapons production.
sharetweet

On that score, despite ritualistic references to technological advances, the NPR offers little qualifying as a departure from the past. The expectations underlying deterrence remain unchanged from what they were when LeMay was commanding SAC: faced with the prospect of annihilation, U.S. adversaries will have the wit to understand their vulnerability, and the wisdom to avoid testing American willingness (if provoked) to replicate Hiroshima on a vastly larger scale. Ultimately, deterrence implies coercive compliance.

Similarly, while insisting that the U.S. nuclear arsenal exists primarily to deter, with weapons to be used only “in the most extreme circumstances,” the NPR rejects out of hand the possibility of adopting a doctrine of “no first use.” The risks of precluding the option of a first strike are too great. The NPR also reiterates America’s refusal to ratify the Comprehensive Nuclear Test-Ban Treaty, another unacceptable risk. As far as the Nuclear Nonproliferation Treaty (NPT) is concerned, the NPR restates U.S. opposition to others acquiring the bomb. Yet it pays little more than lip service to the NPT’s Article VI, which requires all signatories (presumably including the most powerful) to “pursue negotiations in good faith” leading to “general and complete disarmament.” In each of these, the NPR affirms long-standing U.S. positions.

Even more revealing than what the NPR includes is what it leaves out. For example, it contains no mention—none—regarding any environmental implications of resuming nuclear weapons production. The NPR is also silent about the prospect of creating defenses capable of protecting the American people or U.S. allies from nuclear annihilation. Ronald Reagan’s urgent call to escape the deadly logic of mutual destruction is absent. As far as the NPR is concerned, the only alternative to Armageddon is armed-to-the-teeth preparedness. And while worrying about Russian, Chinese, Iranian, and North Korean ambitions, the NPR ignores entirely the dangers and uncertainties posed by the Israeli, Indian, and Pakistani nuclear arsenals.

The failure to mention Israel does not qualify as surprising, of course. Even as Secretary Mattis insists that “We must look reality in the eye and see the world as it is,” on all matters pertaining to the Jewish state the United States chooses to see selectively. Despite maintaining its own robust “triad,” the government of Israel resolutely refuses to acknowledge its possession of nuclear weapons. The NPR continues the U.S. policy of indulging that fiction. In doing so, it implicitly classifies Israel’s nuclear arsenal as devoid of strategic significance—the inverse of seeing the world as it is.

No less troubling is the NPR’s disregard of the Indian and Pakistani arsenals, which go altogether unmentioned. Second only to the Korean peninsula, South Asia is today far and away the place most likely to see nuclear weapons employed in anger.  To overlook that prospect, as the NPR does, is the equivalent of discussing the opioid crisis without mentioning fentanyl.

What matters greatly to the authors of the NPR and thus receives lavish attention is a detailed shopping list of new hardware: a fleet of B21 Raider strategic bombers, a dozen Columbia-class missile-launching submarines, a Ground Based Strategic Deterrent to replace the current Minuteman-III ICBM, and a family of cruise missiles designed to “penetrate and survive advanced integrated air defense systems, thus holding targets at risk anywhere on Earth.”

Despite the NPR’s handwringing about threats and vulnerability, the United States already possesses the most responsive, versatile, and deadly nuclear strike forces on the planet. In essence, the Pentagon now proposes to embark upon an arms race, largely with itself, in order to preserve that status.

While North Korea certainly poses a problem, it’s not one to which a decades-long modernization of the U.S. nuclear arsenal offers an antidote.
sharetweet

Assess U.S. security requirements from the perspective of 1958 and it’s possible to see some merit in this course of action. But 2018 is not 1958. Russia is no longer a global competitor, if it ever was. China may be, but it is also America’s biggest trading partner. Iran has shelved its nuclear ambitions for at least a decade. And while North Korea certainly poses a problem, it’s not one to which a decades-long modernization of the U.S. nuclear arsenal offers an antidote.

Nuclear weapons are to the present moment what poison gas was to the 1920s and 1930s: a grave menace, to be sure, but not necessarily the most pressing. If the United States has a spare trillion lying around, it would be better served devoting that money to the mushrooming challenges of cybersecurity or to the looming threat of climate change.

The Pentagon wants to persuade Americans that it knows what it is doing and has things well in hand. Yet the draft version of this document, which had leaked in January, offered explicit assurances that “Any U.S. decision to employ nuclear weapons would follow a deliberative process.” In the final published version of the NPR, that sentence does not appear. Given the propensity of the current commander-in-chief to brag about the size of his “button” and to threaten “fire and fury like the world has never seen,” the deletion of that statement offers cause for concern. Donald Trump might well have a different understanding of “extreme circumstances” than the rest of us. And acting without deliberation has become a veritable trademark of his behavior as president.